By Tricitynews Reporter
Chandigarh 10th February:- In this week’s track, Chidiyaghar is all decked up to celebrate Mayuri’s (Shafaq Naaz) birthday party. As everyone is enjoying on the dance floor, Mayuri forcefully drags Gomukh (Sumit Arora) on the dance floor. Gomukh who is not confident about his dancing skills and ends up stamping on Mayuri’s feet. Mayuri yells at him in front of everybody. Gomukh is very upset with the whole incident, he feels deeply humiliated. 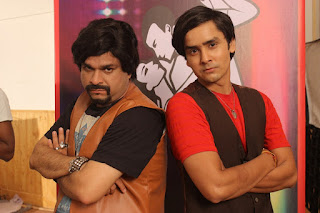 In the meantime, there is a dance competition which is going to take place where Puppy who is a dance trainer thinks of participating with Mayuri. His only motive to participate with Mayuri is to get a chance to visit Chidiyaghar frequently and get to know whether Koyal (Aditi Sajwan) likes him or not. Gomukh gets insecure after seeing the closeness of Puppy and Mayuri while they danced. A jealous and insecure Gomukh tries to interrupt their training sessions. Gomukh tries to confront Mayuri which leads to a fight. She gets emotional and decides to stop the practice with Puppy.
Babuji (Rajendra Gupta) explains to Gomukh on how one should never be egotistical on something and advises him to learn dancing. After listening to Babuji, Gomukh goes through a complete makeover and enters the dance venue as a handsome hunk that is learning dance with complete passion and dedication. Nobody recognises him. Mayuri and Puppy clears various rounds in the competition and enter into the final round. But on the final day, Puppy gets injured and he recommends that the charming guy (Gomukh) should dance with Mayuri. Finally, Mayuri and Gomukh perform on the final day of competition. The judges are impressed and said that Mayuri and Gomukh might be not the best dancers of the night although their chemistry and co-ordination was the best; it looked as if they were soul-mates. Finally Gomukh reveals his identity claiming that he had made efforts to learn dance only for Mayuri.
Commenting on the track, Sumit Arora who plays Gomukh said that Gomukh is really hurt by the humiliation. But the struggle and dedication he goes through to learn dancing for Mayuri is worth watching.

Posted by tricitynews online at 03:27