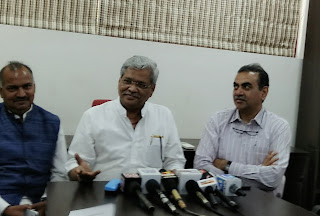 By Tricitynews Reporter
Chandigarh 19th May:- Indian Prime Minister Narender Modi and BJP Chief Amit Shah has provided much needed change to the Indian polity resulting the end of familyism from the politics. This was lauded by Prabhat Jha, BJP National Vice President and Incharge Chandigarh BJP while briefing the media at Party Office Kamlam today. He was in Chandigarh day before to review the arrangements on the onset of Amit Shah Visit to Chandigarh. Amit Shah will arrive on a two-day visit to Chandigarh on Saturday as part of his country-wide 95-day tour, which began from Jammu last month.
Amit Shah is travelling across states to strategize and find ways to strengthen the party at the grass-roots level with an eye on the 2019 Lok Sabha polls.
Expressing his satisfaction over the arrangements after the recci of the entire route upto party office, Jha also applauded the renovation of ‘Kamlam’ and congratulated the Unit Chief Tandon and his team.
Terming BJP office as Vaicharic Mandir (Ideological Temple), he said Party is very aggressive for opening one BJP office at every district level and this office at Chandigarh as state of art can be act as ‘role model’ for all. To fulfill this dream every single party worker is committed hard to achieve this goal.
During his briefing, he said people of the country has open hearted accepted the policies of BJP which resulted the three successful years of Modi ji’s tenure. He alleged each party and politicians are enjoying political repute for their families and selfish concern while BJP only for national interest at large.
Commenting on the party performance in Unit,Prabhat Jha said that BJP win in Chandigarh started the winning spree further resulting the landslide victories in Faridabad and Delhi. He said that he is sure party will remain maintain this consistency till next elections.
Chandigarh Unit President Sanjay Tandon said that the BJP chief has covered HP, J&K and Lakshdweep so far. The main aim of the visit was to strengthen the party at the booth-level and to reach out to the masses with the prime minister's pro-poor schemes.
Amit Shah will be arriving Chandigarh with a packed schedule  which includes hold a series of meetings with councilors, office bearers, workers etc and will also review the party's organizational activities. His itinerary also includes inauguration of newly renovated BJP office and unveiling of a statue of RSS icon Pandit Deen Dayal Upadhyay, whose birth centenary is being observed.

Posted by tricitynews online at 05:23