‘Destiny Always Brings Us Together on Television’: Anup Upadhyay on Working with Soma Rathod 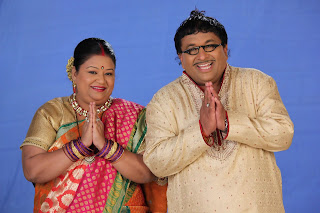 By Tricitynews
Chandigarh 17th May:- An actor’s life journey is full of struggles, milestones, memorable performances and nostalgia. A good co-actor plays an important role in any actor’s life and helps to bring out the best. Be it their real or reel life, sometimes destiny brings good actors together to create magic for the viewers. The same happened with Sony SAB’s Jijaji Chhat Per Hain fame Anup Upadhyay and Soma Rathod who have worked on several shows and entertained the viewers with their impeccable comedy timing.
Television’s versatile actor Anup Upadhyay who is popularly known as Murari from Sony SAB’s Jijaji Chhat Per Hain shares a good rapport with his co-actor Soma Rathod. Their mutual respect for each other’s talent and craft helps them perform better. Call it destiny or luck, Anup Upadhyay and Soma Rathod have worked together in five shows. The onscreen duo that are currently seen as Murari and Karuna in Jijaji Chhat Per Hain have received a lot of love and appreciation throughout their journey for their roles and once again entertaining viewers with their talent.
The actors expressed their happiness on how the audience has loved their on-screen Jodi and how they have had a good time working together and generated memories.
Expressing his views on working with Soma Rathod, Anup Upadhyay a.k.a. Murari said that it’s been a great working with Soma Ji, this is our fifth show and there is a comfort level built between us that help us enhancing our performance. It will be great if we get a chance to work together in future as well.
Talking about her colleague, Soma Rathod a.k.a. Karuna mentioned that Anup Ji and I have been working together since long time and we have built a great rapport. It is really great to share the screen with people you are most comfortable with and I am looking forward working with him in future.
Posted by tricitynews online at 06:16