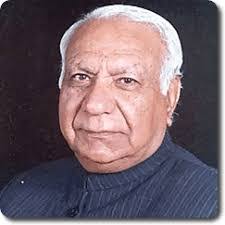 By Tricitynews
Chandigarh 14th August:- Chhattisgarh Governor Balramji Dass Tandon, who was one of the founder members of the BJP’s organisation Jan Sangh, died after suffering a heart attack at a government hospital here on Tuesday. He was 90.
Balramji Dass Tandon breathed his last at the state-run Dr. B.R. Ambedkar Memorial Hospital where admitted this morning after he complained of uneasiness. Balramji Dass Tandon was kept in the hospital’s critical care unit in view of his serious condition.
Chief Minister Raman Singh, who visited the hospital earlier on getting the news of Tandon’s illness, announced a seven-day state mourning in view of the Governor’s demise.
Independence Day will be observed in a traditional manner on Wednesday and there will be no award and cultural ceremonies, the CMO said in an official release.
Balramji Dass Tandon’s body will be taken to Raj Bhawan, where it will be kept for people to pay their respects at 5 pm. The body will be taken later to Balramji Dass Tandon’s native place in Punjab.
In his condolence message, the chief minister said that as Governor, Balramji Dass Tandon offered his valuable services to Chhattisgarh for around four years.
Balramji Dass Tandon had assumed the office of Governor in Chhattisgarh on July 2014.
During his long political career, he served on various posts, including as deputy chief minister of Punjab.The six-time MLA was also jailed from 1975 to 1977 during Emergency.