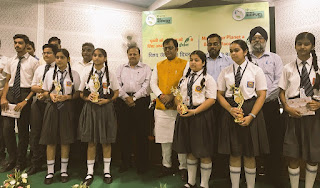 By Tricitynews
Chandigarh 11th August:- Every year 10th August is observed as World Bio-Fuel Day in a bid to create awareness about non fossil-fuels (Green Fuels). Bio fuel programme in India is aimed at creating a secure and sustainable environment friendly Bio fuel economy to achieve a vibrant rural economy besides achieving energy security for the nation and as a tool for rural development and rural life upliftment.
As per the directive of MOP&NG, Indian Oil celebrated World Bio-Fuel Day in Chandigarh. Mayor, Devesh Moudgil presided over the function in presence of  Sandeep Jain, State Level Coordinator (Oil Industry, Punjab) & Chief General Manager In-charge, Indian Oil Corporation Ltd. (Punjab, J&K , H.P. & Chandigarh). The event was attended by school students, farmers and officials of oil marketing companies. During the function, videos and presentations on bio-fuel energy were shown and lectures were delivered highlighting the importance of bio-energy.
Devesh Moudgil, Mayor, Chandigarh congratulated IOCL in working towards this important step. Bio-energy fuel is considered as one of the most promising alternative across the globe. He remarked that recognizing the potential of bio-energy, India has to now gear up and plan a systematic movement. He also affirmed that it is a great entrepreneurial opportunity and it is expected that people should come forward and take it as a business model.
Sandeep Jain, State Level Coordinator (Oil Industry, Punjab) stated that PSU oil companies are committed to this movement. He also stated that Bio-fuel is an integral part of a sustainable energy strategy for India and statistics have shown that bio-energy technology alternatives compare quite favorably with the conventional energy sources.
Pre event competitions were organized in the schools and winners were felicitated during the function. Also a walkathon for bio-energy was organized and bio-energy saplings were planted by the dignitaries.
Posted by tricitynews online at 05:17