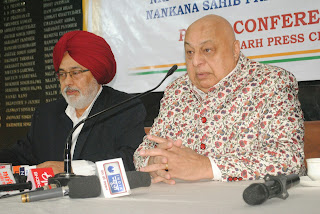 By Tricitynews
Chandigarh 30th August:- A Mega NRI Convention  is being organized in Chandigarh this year.  The Indus Canada Foundation is organizing this convention on the occasion of 550th Jayanti of Nankana Sahib.
Chairman of Indus Canada Foundation Gurinder Sodhi and President Vikram Bajwa announced the program in a joint press conference. They said that the upcoming NRI Convention will be held from December 15 to December 19. The inauguration of this event will be held in Chandigarh.
Vikram Bajwa said that Nankana Sahib Hockey competition will be organized in Shahabad of Haryana, Ludhiana, Jalandhar and Amritsar of Punjab. For this, there will be Pakistan Punjab XI and India Punjab XI teams competing against each other.
They said that Union External Affair Minister Sushma Swaraj, Punjab Chief Minister Capt. Amarinder Singh and Haryana Chief Minister Manohar Lal Khattar have been invited to inaugurate the NRI Convention in Chandigarh.
On December 19, at the closing ceremony of the convention in Amritsar, Union Information and Sports Minister, Vijay Vardhan Rathore has been invited. He will present the prizes to the  hockey teams.
Both of them appreciated the efforts of both governments for opening Kartar Pur Border for Nankana Sahib and said that this will strengthen the relations between the two countries.
About 2000 NRIs will take part in the Mega NRI Convention this year.
Posted by tricitynews online at 05:06