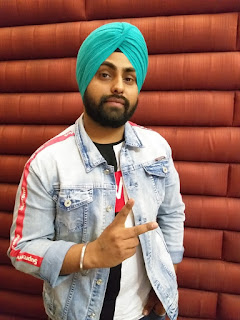 By Tricitynews
Chandigarh 29th Mar, 2019:- Harby Singh, a budding Punjabi singer, has come up with his new song ‘Badami Rang’. The song is a romantic dance number, shot in Bali, Indonesia. It has been released under the Zee Music label. ‘Badami Rang’ is a Punjabi dance number, which is already getting massive response on youtube and other social media platforms. The song has been produced by Harshit Paul and directed by Shubh Karman. Lyrics are given by Jeet Aman, while the music is given by Jaymeet.
Narrating his initial days of struggle, Harby Singh said that his parents did not support him for the first two years. They wanted him to pay attention towards his studies. But he used to skip classes to do his ‘riyaaz’. They were unsure if this field could give him a secure future. But when his relatives started praising his singing to his father, one day he asked him how much money will a song shoot cost. That’s when his parents finally started believing in him and his singing. So his first song was a result of his parents blessings and support.
Harby has been trained in tabla by his father. His inspirations are Sardool Sikandar and Daler Mehndi. His music is in urban style. Harby has already sung two songs before Badami Rang. His first song ‘Saun Lagge’ was released in 2017. He is also been performing live since 2016 and has done many shows all over the world. From singing as a backup vocalist with other artists to now singing his own songs live, the 26-year old singer is determined to fulfill his big dreams.

Posted by tricitynews online at 04:44