Power of Flight or Invisibility: What the Stars from Sony SAB's Aladdin Naam Toh Suna Hoga Wish for as Genies 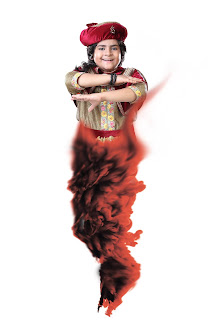 By Tricitynews
Chandigarh 27th June:- Sony SAB’s Aladdin: Naam Toh Suna Hoga has successfully captivated viewers by taking them on a magical journey with Aladdin and his brand new troop of Genies. The new season of this legendary tale has witnessed new Genies with exciting powers which includes the enchanting Genie-Menie, also known as ‘Genie of the Bottle’ who can freeze anyone, albeit only for 15-20 seconds and the adorable Chaand Changez, the ‘Genie of the Pendant’ who is a shapeshifter, taking the shape of any non-living object but only for a limited time.
On that magical note, the stars of this show shared their interesting thoughts and desires when they were asked this intriguing question – “If you were a Genie for a day, what would you do?
When the  most energetic and charming artist, Siddharth Nigam who plays the role of Aladdin, was asked this question, he was thrilled to shared that his character Aladdin has an entire gang of Genies and he’d love to have that opportunity of being one as well. So if he is a Genie for a day, I’d first make sure that he retain my powers forever and he would save this world from all the threats. When asked if he would like to do something for himself he shared that he’d fulfill everything his loved ones wish for in life.
The glamourous, Avneet Kaur who plays the character of Yasmine said that she have always wished to have the ability to fly and I’d make that come true if she were a Genie for a day. Avneet later shared that she carries immense love for travelling and exploring the world and she would use this power to fly anywhere in the world for free. She also expressed her desire to contribute to the world with her powers by magically crafting a lavish feast for the underprivileged.
Talented and experienced artist, Aamir Dalvi essays the role of evil Zafar on the show gave a heart-felt response when asked this question, if he is a Genie for a day, I’d bring he father back to life. He passed away a long time ago and I’d love to see him again and show him that his son is doing well.
Child artist Krishang Bhanushali who plays the role of Chaand Changez responded with great excitement and said that he would want to have all kinds of power but first he would love to fly like a bird. He further added, being a car lover, he would magically have all his favorite cars appear at his home for various occasions and moods. Playing the role of a Genie on the show, Krishang expressed that he enjoys the character Chaand Changez and his power of being a shape shifter.
Sonal Bhojwani who has recently joined the Genie troop as Genie-Menie in this popular fantasy show said that I’d like to control the various elements of the nature: water, fire, earth and wind and play around with it. She expressed her desire to float in the air and when asked about the object she’d be connected to, she responded with sheer excitement that it would be a ‘Genie of a sparkling diamond tiara.
Raashul Tandon who plays the role of Ginoo, the most powerful Genie of the Lamp, had a rather different take on using his powers as a Genie in real life. He said that he would have the power to be invisible and use this power to eliminate misunderstandings by being the invisible fixer of any situation  Raashul had some notorious plans as well if he was invisible. He would tease his friends if he had such powers.

Posted by tricitynews online at 04:49