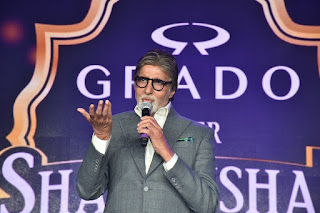 By Tricitynews
Chandigarh 17th July:- Having set new benchmarks in the world of Textiles, power brand ‘GRADO from The House of GBTL and OCM’ has charmed the premium fabrics segment with its specialty of amalgamating modern technology with the tradition of making fabric. To commemorate its success, the brand organized the ‘GRADO Super Shahenshah Meet’ to celebrate its meteoritic rise in the Industry and its association with their brand ambassador, none other than the ‘Shahenshah of Bollywood’, Amitabh Bachchan. The event took place at Hotel Sahara Star, on 12thJune, 2019, 6 pm onwards, with over 1000 + dealers, retailers, distributors and wholesalers, from across the country, in attendance.
The main objectives of the event included the ‘Meet and Greet’ session to award the winner of the ‘GRADO Dekho, Big B se Milo’ contest; recognition and felicitation of top performers, in several categories, for the revered houses of GRADO–GBTL and OCM and celebrating its association with Big B as their Brand Ambassador.
The function began with a tribute to the Chairman, followed by a riveting speech by Mr. Rajendra Agarwal, Mentor, GRADO.This auspicious occasion was marked by the Lighting of the Lamp as well.
The stage was then taken by Emcee Siddharth Kanan, top Indian television and radio host, who began his evening with the gathering on an inspirational note via a ‘Mirror activity’, which portrayed that each one of them is the reason behind GRADO’s phenomenal rise in the Industry.
To get a fun glimpse into the Top Management, the next segment was ‘Roobaroo with GRADO’, a chat-show based format, wherein Kannan interacted with the GRADO team via an informal banter, thus enabling the audience to get to know them like never before. Along with witty quips and informal conversations, the team shed light on new areas being explored in terms of product and channel, how the Gen Next is taking the legacy forward, key associations and more. It was thoroughly enjoyed by everyone gathered at the venue.
Having interacted with the team, it was now time to acknowledge and recognize the phenomenal work done by GRADO’s biggest stakeholders – wholesalers and retailers – from the Central, West, East and South Zones across the country for both GBTL and OCM.
The first set of awards was ‘Best Zonal Performers for Grado’, with 9 winners from OCM and 10 winners from GBTL. This was followed by a wonderful dance performance that captivated the audience. The second set of awards was ‘National Excellence Awards for Grado’, with 10 winners from OCM and 11 winners from GBTL, with all the winners receiving enormous rounds of applause from the gathering.
The delightful evening proceeded as Kannan’s interacted with the audience via fun question rounds, which was a prelude to the arrival of the Star of the event–The Shahenshah of Bollywood –Amitabh Bachchan.
Amidst all the happiness and cheers of the crowd, Amitabh Bachchan was felicitated onstage by Rajendra Agarwal, Mentor, GRADO. Following this, the former indulged in a candid conversation with the audience seated at the event. After an engaging session with the crowd, it was time for an enjoyable quiz titled ‘GRADO ke GYANI’ for all the retailers and wholesalers present at the event, with Amitabh Bachchan being the Quizmaster and Mr. Kannan being the Moderator for the same. We had 6 lucky guests who were questioned by Big B himself about Grado and the whole crowd was in all cheers.
This was succeeded by the “Sawal Aapke , Jawaab Big B Ke” , wherein Kannan asked Amitabh  Bachchan to answer few select questions by the audience, to know more about his association with GRADO as its brand ambassador, his journey with the team and more.
To add to these blazers were signed by Amitabh Bachchan himself at the event.

Posted by tricitynews online at 05:47