Property Tax to be Abolished in Mohali:Balbir Sidhu 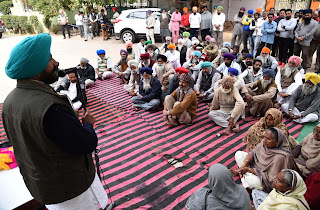 By Tricitynews Reporter
Chandigarh 23rd January:- The Congress government, if elected , will abolish house and property tax in Mohali.  The residents are under undue financial pressure besides mental harassment due to these taxes.  Keeping this in mind, we will abolish it. This was stated by Balbir Sidhu the Congress candidate during his poll campaign at phase 7 here today.
Balbir Sidhu said further that Capt Amarinder Singh government had given top preference for Mohali development. It was in fact a matter of great pride for Mohali to get district status under Congress govt. Similarly this time after the formation of Congress government, all problems of Mohali will be solved within 6-months.
He said that the local bus service will be started in Mohali. The all efforts will be done to set up an international level basic infrastructure in Mohali. Implementing need-base policy in Mohali will also be our main agenda so that residents of town can expand their houses as per their requirements.
Later addressing a poll rally at Bhagomajra village, Balbir Sidhu said that today our state is being seen as example of misrule and depravity. The Congress after coming to power will redeem the lost honour of Punjab. We will not tolerate any compromise of our social honors. We will start programs to bring back our youth back in main streamline who at present are destroying their lives by becoming addict to drugs.
Balbir Sidhu said that creating ample employment opportunities to youth in state will be prime focus of Congress government. For this we will try to revive the industrial growth in state which is missing from the past one decade.

Posted by tricitynews online at 04:32