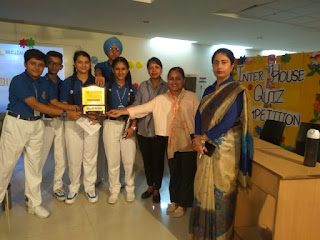 By Tricitynews
Chandigarh 24th July:- Brilliance World School organized an inter house quiz completion . The teams were prepared by the house leaders under the guidance of house mistresses. All the four houses had put in extra ordinary efforts and there was a tough competition.
The Aravalli house won the first position and the members of the team were Prithvee, Mehak, Guranshika, Aryan and Amrit. The second position was won by Nilgiri house and the members of the house were Simran, Jai, Malika, Siddhant and Yatharth.
Niranjana Chatterjee, Principal said that this competition is aimed at not only improving the general knowledge, but also to put students into team solidarity and house loyalty.

Posted by tricitynews online at 06:24