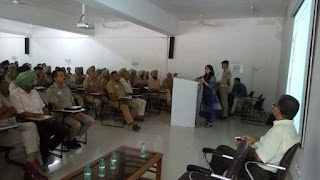 By Tricitynews Reporter
Chandigarh 27th September:- An awareness programme   on “Organ Donation and  Role of Police in Organ Donation.’”  was organized in collaboration with Mohan Foundation in  Recruit Training Centre(RTC) , Sector-26, Chandigarh under the guidance of Tajender Singh Luthra, D.G.P., U.T., Chandigarh and under the supervision of Ravi Kumar, S.P./ Operations & Training. 167 police officers (Inspector, Sub Inspectors, Assistant Sub Inspectors, Head Constables and Constables) have attended this programme.
Ms. Deeplika, Project Manager, Mohan Foundation explained as to which organs can be donated by a diseased person and living person. She also explained the concept of Brain Death and its clinical evaluation.
Sudhir Dewan, Director, Mohan Foundation spoke on the role of police especially in MLC cases. He informed that in India there is an accident death every 3.7 minutes and 66% of the accident victims can be counselled for Organ Donation. Sudhir Dewan said that Chandigarh Police has always played a proactive role in case proceedings and also in creating Green Corridors
The objective of this programme was to create awareness among the police personnel regarding   donation of organs and to discuss the important role of police in this regard to save a life and  also in creating Green Corridors while transporting the human organs.

Posted by tricitynews online at 05:26