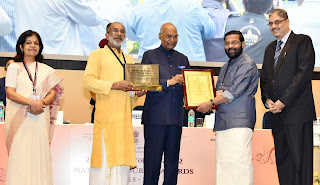 By Tricitynews Reporter
Chandigarh 27th September:- Kadakampally Surendran, Minister for Tourism, Government of Kerala received six National Tourism Awards 2015-16 from The President Ram Nath Kovind, Vigyan Bhawan in New Delhi today. The Department of Tourism, Government of Kerala has been lauded with Hall of fame award for the ‘Most Innovative Use of Information Technology - Social Media / Mobile App’ for the ninth consecutive year.
Out of these six awards, Kerala Tourism bagged two awards in the marketing category, including ‘Best Tourism Promotion Publicity Material’ for a film tourism brochure- ‘Your Next Blockbuster Destination’ and ‘Excellence in Publishing in Foreign language other than English’ for a Spanish Brochure titled “Reanimar – Enel Propio Pais de Dios”, conceived and developed by Stark Communications. The film tourism brochure highlights the picturesque beaches, exotic wildlife, hill stations and unexplored backwaters that are amongst just a few of the prime locations that can be used to shoot any form of media. The Spanish brochure encapsulates the key attractions of the state, highlighting why Kerala is considered to be the most sought-after destination across the world.
The state tourism also bagged an award for the Best Responsible Tourism Initiative for ‘Kumarakom’. The spirit of Kerala’s Responsible Tourism is based on the availability of plenty of natural resources, skilled manpower, supportive entrepreneurial community, strong local-self-governments, civil-society organizations, multitude of micro enterprises, streams of professionals and academicians, responsible media and responsive tourism industry. All of these initiatives provide the state an ideal setting to implement and practice it.
Speaking about the significance of the responsible tourism initiative, Kadakampally Surendran, Honorable Minister for Tourism, Government of Kerala stated that it give us immense pleasure to be lauded with the prestigious National Tourism Awards in six different categories. Kerala Tourism has been focused on promoting the concept of ‘Responsible Tourism’ for protecting environment and conserving cultural heritage. And, receiving award for this significant initiative of the state emboldens the tourism department to keep up the positive momentum.
Moreover, the state was lauded with 3 National Awards in private sector. Lotus Destinations Pvt. Ltd., Cochin bagged award for Best Tour Operator Promoting Niche segments other than MICE and adventure and Vivanta by Taj, Kumarakom received award for Best hotel – 4 star category and Somatheeram Research Institute & Ayurveda Hospital Pvt. Ltd bagged award for Best Wellness Centre.
With the aim to promote river-cruise tourism, the Government of Kerala has envisioned Rs 300-crore project for nine rivers in Kannur and Kasaragod. In addition, the State government is planning to develop quite a few adventure parks for adventure enthusiasts. For which, the government allocated Rs. 45 crore for Prasadam project and Rs. 20 crore for Green Carpet scheme for Alappuzha, Enranjil, Neyyar and Thenmala.
Dr. Venu V, Principal Secretary, Department of tourism, Government of Kerala said that receiving such prominent awards for the innovative marketing strategies and the usage of technology in tourism have enhanced the profile of the state as a sought-after destination across the world. Over the years, the persistent recognitions for Kerala in the national forum have positioned the state as a preferred tourist destination for domestic as well as international tourists.
Posted by tricitynews online at 05:32