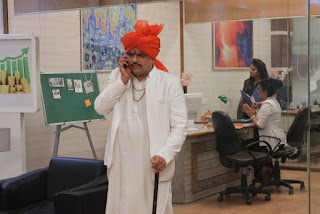 By Tricitynews Reporter
Chandigarh 11th October:- After the fret of losing Jaya and being caught by Lokhandes, the Chopra without revealing that they are rich got Jay and Jaya married in a simple yet traditional way. But soon there will be another twist in the show. Lokhande will see Premchand in their office and believes that Premchand (PC) has a twin brother.
In the forthcoming episode, PC (Tiku Talsania) receives a call from his company announcing their new deal to build a Malland gleefully he rushes to office to sign the deal. At the same time Lokhande (Sharad Ponkshe) also receives a call saying that a mall is being built at the plot of a school. Furious and agitated Lokhande rushes to meet the owner of the company to stop this deal. Premchand who is unaware of Lokande’s arrival barges into his cabin. Lokhande gets the shock of his life looking at Premchand in the office. Premchand introduces himself as Paramveer Chopra. Lokhande gets confused looking at the scenario. Lokhande is still in doubt and calls Premchand to check about his whereabouts. He immediately instructs Sudhakar to check for PC’s presence only to find that PC is at gareeb ghar.
Tiku Talsania who plays the role of Premchand and Paramveer a.k.a PC said that PC gets paranoid when he finds Lokhande in his room. He immediately introduces himself as Paramveer Chopra. The entire track turns hilarious when PC had to prove Lokhande that there are two different people.

Posted by tricitynews online at 05:00