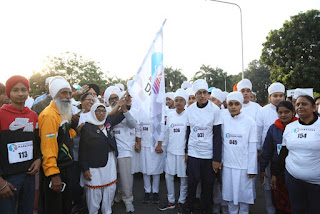 By Tricitynews
Baru Sahib 12th November:- Bibi Man Kaur, gold medalist at World Masters Athletics at the age of 102, today flagged off “Race against Drugs’’, the marathon which began at Sukhna Lake.
The marathon was organised by The Kaldighar Trust, headquartered at Baru Sahib, Sirmaur, Himachal Pradesh in order to focus attention on the increasing drug menace in the country. The organisation runs two Drug-De-Addiction and Rehabilitation centres, with the name, Akal Drug De-Addiction and Rehabilitation Centres.
The marathon was joined by 400 runners including students of Akal Academy school and MSK Public school, Village Swara, District Mohali, senior citizens, college youngsters, fire marshals, marathon enthusiasts and people who have been treated by the trust for addiction and who have recovered from the same.
The marathon commenced from Sukhna Lake at 7:15 am crossing Rock Garden & Bougainvillea Garden  and ended back at Sukhna Lake at 8pm. Runners raised slogans for drug free society and carried banners and placards during the “Race against Drugs’’.
All the runners were given T-shirts and certificates.
While appealing to youth to not consume drugs and stay healthy and sporty, Bibi Maan Kaur said that Drug addiction is ruining society and youths are getting financially, physically and mentally affected. She gave call to all sections of society to understand the gravity of situation and should come forward to fight against the drug menace
Addressing the gathering, Dr. (Col.) Rajinder Singh, Director, Akal Drug De-Addiction Centers said that the goal of the campaign is to mobilize support and to inspire people to act against drug abuse and trafficking. The marathon is a way encourage young people to put their health first and never take support of drugs as a solution to their problems.
The event culminated with oath taken by participants to make society free of drug and alcohol addiction.

Posted by tricitynews online at 04:57