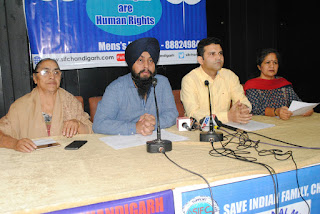 By Tricitynews Reporter
Chandigarh 18th November:- In a country like India where there are more than 50 laws for the protection of Women, where there are more than ten thousand NGOs working for the safety of women, where there is a separate ministry for the welfare of women, there is nothing for men. The world celebrated International Women’s Day but when it comes to celebration of International Men’s Day, no one comes forward. To create awareness about International Men’s Day and to highlight the role men play in society, NGO Save Indian Family- Chandigarh chapter will celebrate International Men’s Day on 19th November by organizing Peaceful March and Silent Sitting at Sector-17 Plaza. Addressing media persons today at Chandigarh Press Club, members of association told that tomorrow on International Men’s day we will be educating and creating awareness among the citizens of India about the rights of each man and about the discrimination men face in their normal day to day life. The members of the NGO will also be distributing the cards amongst the men.
Maninder Singh Rupyal & Rohit Dogra from Save Indian Family-Chandigarh Chapter said that Save Indian Family (SIF) has been working on the social cause of promoting family and marital harmony since 2005. They added that they have a dedicated Free National Helpline 8882 498 498 for men who are fighting and facing false cases of gender biased laws including 498-A, Rape, Custody Battles, Maintenance etc.
Rohit said that it is important to recognize and reward men for being there for their families in ups and downs of life and actively taking part in development of their children. On this Occasion Members of Save India Family-Chandigarh Chapter namely Nitin Gupta, Kanish Kumar, Manmeet Thapar, Ravinder Singh, Sanket Khandelwal, Dishant, Gagan Bhardwaj and Amandeep Singh were also present. They are working relentlessly to make this awareness campaign successful.
The members of the NGO said the positive role of Men as a family builder a pillar of society a protector and provider and his relentless services is subdued The bias in society as a whole has left Indian Men to think it’s high time to Empower the male fraternity to address the growing imbalance will obfuscate the position of men as a Whole. They said that Heath issues of men are something never heard of & is awarded complete apathy. No attempt has been made to introduce a department of gender studies and identify the mortality of Men. The legal apathy is such that a man finds himself hand cuffed in front of gender biased laws and virtually has no representation or escape route to come out victorious from the web of biased laws unhurt. Less than 5% of fathers could secure Child custody in a failed relationship again adding vows to a father.
The essence of bias in lawmakers take a preposterous assumption that male alone are responsible for the fragmenting family values. “Cruelty by husband on Wife “defines highly misused law of IPC. Under similar circumstances what may be counted as cruelty by Men on women it doesn’t seems to be case other way round, if same repertoire is performed by opposite sex. More than 2 lakh innocent Men are thrown behind bars each year adding wows to Men & another 50 thousand women pushed behind bars.
Further they said that NCRB 2014 Suicide Statistics reveal that the suicide of men is 89129 vs that of women is 42521, The most concerning trend is Suicide of married men which is 59744 vs that of married women is 27064. What more alarming is the increasing differential of male suicides vs female suicides. As it is family issues the biggest reason of male suicides. Domestic violence on men is unrecognized and to add fuel to fire plethora of gender biased laws like 498A , domestics violence act and maintenance law stero type men as perpetrator.
The major challenges surfaced in modern Indian Society are the absence of gender neutral laws. The added that the bias is not just limited to judiciary it exist on the basic psyche of individuals, the general misconception assumes male as perpetrator & female as victims.  Under the said frame the issues of men has been locked in epitaph. So on this “International Men’s day” Let’s raise a pledge,” Why not empower Men?”
It may be mentioned that “International Men’s Day” is celebrated every year on 19th November to mark pride and respect of Men. Save India family is instrumental behind the inception of Men’s Day Celebration, a lesser known event not keenly observed. However its gaining traction nationwide and various NGOS have come forward to commemorate the positive contribution by Men. Men’s  right activist observe this day as a day of liberation for men and take immense honour for highlighting the positive contribution rendered by men in various score of life. International Men’s day is not only a mark of men’s liberation, it is also an opportunity to highlight the plight of men who face discrimination under gender biased laws.

Posted by tricitynews online at 05:33 No comments: 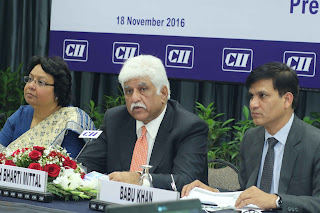 By Tricitynews Reporter
Chandigarh 18th November:- The Confederation of Indian Industry (CII) Vice President and Vice Chairman Bharti Enterprises, Rakesh Bharti Mittal, today announced that the premier industry body will host the 12th edition of India’s premier integrated Agri Fair, CII Agro Tech 2016, at Parade Ground, Sector 17, Chandigarh, from 19- 22 November 2016. CII Agro Tech 2016 is India’s premier biennial agro technology and business fair with 92 domestic participants and significant international presence, including 47 foreign exhibitors from as many as 13 countries this year.
Punjab and Haryana will be the Host States for the four-day international agricultural expo while Madhya Pradesh and Gujarat as Partner States. Israel is the Partner Country for CII Agro Tech 2016. The Union Ministry of Agriculture & Farmers Welfare, Union Ministry of Food Processing Industries, Agricultural and Processed Food Products Export Development Authority (APEDA), and the Ministry of Commerce & Industry, Government of India, are Partner Ministries for CII Agro Tech 2016.
Addressing mediapersons here today, Rakesh Bharti Mittal, Vice-President, CII & Vice-Chairman, Bharti Enterprises, said that the 12th edition of CII Agro Tech 2016 is one of the biggest confluences of stakeholders from agriculture and allied sectors. I am happy to share that for the first time in the history of Agro Tech, since its inception in 1994, two Heads of the States-Pranab Mukherjee, Hon’ble President of India and H.E. Reuven Rivlin, Hon’ble President of Israel, are coming together to inaugurate CII Agro Tech 2016 on Sunday. Their presence and the coming together of 13 countries makes CII Agro Tech 2016 a truly international platform to showcase agricultural advancement. It highlights the growing importance of agriculture and food processing sector in India as well as the fact that CII Agro Tech 2016 is becoming a global platform.
He said that CII has adopted the theme ‘Building Global Competitiveness’ for CII Agro Tech 2016, which is in aligned with CII’s National Theme, ‘Building National Competitiveness’. He added this year in CII Agro Tech 2016, CII is focusing on Technology Intervention in a big way.
The Union Ministry of Agriculture & Farmers Welfare and Ministry of Food Processing Industries are the Partner Ministries for the fair. Punjab & Haryana are the Host States. Madhya Pradesh & Gujarat are the Partner States and exhibitors from 15 states are taking part in CII Agro Tech 2016.
Rakesh Bharti Mittal further said that on the International Participation, we are proud that Israel is the Partner Country with Canada & Germany as Focus Countries and Great Britain as Guest Country. 12th edition of Agro Tech has participation of 47 overseas companies from 13 countries including Canada, China, Denmark, Germany, Israel, Italy, Malaysia, South Africa, Spain, The Netherlands, Turkey, United Kingdom, USA that make it truly global event.
He elaborated on the international conferences focusing on Rejuvenating Agriculture and promoting global competiveness. These include Indo-Canada Partnership in Agriculture:  Realizing the untapped Potentials, India-Israel Roundtable on Precision Agriculture in which 7-delegates from Tel Aviv University & Volcani Centre will apprise how India can leverage Israel technology & expertise. There will be a Technical workshop with Germany on “Challenges and Solutions for Comprehensive Straw Management” and Session on Empowering Women to Unlocking Africa’s Agricultural Potential.
Giving details of AgroTech 2016, Rumjhum Chatterjee, Chairperson, CII Northern Region shared that this edition of CII agro Tech event will play a pivotal role in creating a common platform for the farmer community to engage with the industry to explore, learn and adopt new and emerging technologies and farming practices aimed at improving overall productivity and consequently rural income. Apart from large domestic participation, this year CII Agro Tech 2016 has significant presence of international players in food processing and agriculture sector.  We have also envisaged several theme based conferences & country specific sessions to build capacity and capability in Indian Farming Sector.
Rumjhum Chatterjee said CII has also scheduled a focused discussion on ‘Doubling of the Farmers Income by 2022’. The objective is to come out with a roadmap and clear action plan for all the stakeholders to work towards achieving the vision of Hon’ble Prime Minister India to double the farmers’ income in next 5 years.
Posted by tricitynews online at 05:27 No comments:

An’ Awareness Session’ on ‘Organ Donation’ organized at GMSS Sector-16

By Tricitynews Reporter
Chandigarh 18th November:- An’ Awareness Session’ on ‘Organ Donation’ was organized in Govt. Model. Sr. Sec. School, Sector-16, Chandigarh today by Ms. Simmi. B. Sumbrea and Ms. Nilakshi from PGI, Chandigarh. Students of the School were made aware of both ‘Cadaveric’ and ‘Live’ donation of organs. It was followed by face painting competition on the theme ‘Organ Donation’.
The School Principal, Mrs. Neeta Sandhu applauded the effort of Teachers and Students.

Posted by tricitynews online at 05:21 No comments: 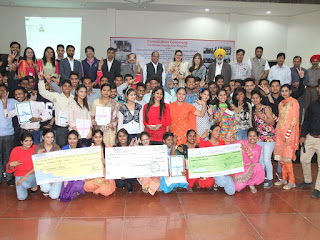 By Tricitynews Reporter
Chandigarh 18th November:- As many as 600 students of economically weaker section (EWS) received the certificates for completing various short-term job oriented courses under the Deendayal Antyodaya Yojna – National Urban Livelihood Mission (DAY-NULM) at a convocation held at CDCL, Sector 28 B on Friday.
DAY- NULM is a National mission for alleviation of poverty among EWS/Urban Poor. Skill training program were organized in three areas under Employment Skill Training and Placement (EST&P) component of Deendayal Upadhyay Antyodaya Yojna - National Urban Livelihood Mission (DAY NULM).
Skill training was given to the youth aged between 18-35 years who are living in rehabilitated colonies, urban slums, demarcated areas under urban poverty. These training programs were conducted by Skill Training Partners (STPs), CDCL, S. E. Biz Info-tech Ltd. and Regional Centre for Entrepreneurship Development (RCED) Chandigarh.
While sharing more information, Social Development Officer, Urban Poverty Alleviation Cell, Municipal Corporation, Chandigarh, Vivek Trivedi said that around 600 beneficiaries living under absolute or relative poverty and in vulnerable conditions have successfully completed 460 hours of skill training under trades in Air-conditioning and Refrigeration, Accounting and Tally and Fundamentals of computing and Networking. During the training students were provided with Kits and Stipend for conveyance.
Adding to it he said that the training included core skills in respective trade (400 hrs), Personality Development and Grooming (30 hrs), Basic ICT and social ethics (30 hrs) vis-à-vis on Financial inclusion, Motivation and Inspiration for progressive higher education through IGNOU, HIV/AIDS awareness, Respect to Elders and Women, Rights and Duties, Personal and Public Cleanliness and hygiene, environment conservation, ill effects of drugs and good health and nutrition.
The students were assessed by National Council of Vocational Training (NCVT) approved Third Party Assessors. Under the EST&P component of DAY-NULM, students were given Skill Training, Training Kits, Stipend for conveyance, skill training
The progarmmes which were aimed at empowering students with economic independence offered placement to the students and 55 per cent of students have already secured jobs. Key Placements were offered at Dr. ITM , SERCO LTD, LMV Info Ltd. MK Refrigeration , BM refrigeration, Godrej, Competent, Amazon, Smart Solution, Majestic Rise wealth Management, ITS Argus Healthcare . The salaries between Rs.5500/- to Rs.12000/- p.m have been offered to these students. The ceremony marked the conclusion of their training and distribution of stipend amounting to Rs 11 lakh to beneficiary students as Direct Beneficiary Transfer (DBT).