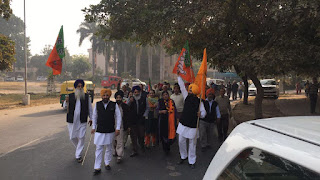 By Tricitynews Reporter
Chandigarh 09th December:- Shiromani Akali Dal candidate Inderjeet Kaur Kang started her campaigning today for Municipal Corporation Election for Ward no. 09.  Before starting her election campaign, she organizes Path of Shri Sukhmani Sahib. She also served Guru Ka Langar after the Path. After taking blessings She and her husband along with Hundreds of supporters went door to door at the residence areas of Sector 40-A and B. She assures the residents for overall developments in the ward and the execution of the pending works that have been never taken up in the MC. She also assures proper maintenance of green belts and cleanness are on her priority list.
Posted by tricitynews online at 05:59 No comments: 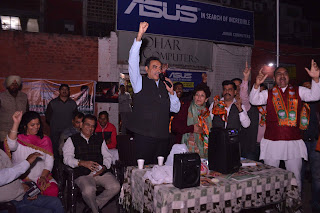 By Tricitynews Reporter
Chandigarh 09th December:- Bharatiya Janata Party (BJP) candidates today got tremendous support from trader communities in different parts of city. While the Chandigarh State President of the party, Sanjay Tandon also joined party candidates, getting overwhelming response from people during his door to campaign, city mayor Arun Sood was weighed against jaggery in Sector 37 market.
Sanjay Tandon, Chandigarh State President, Bharatiya Janata Party (BJP) today accompanied Raj Bala Malik, candidate from ward number 2, to interact with the retailers and vendors in the market sector 15. While carrying out door to door campaign Tandon spoke to the traders about the progress that has been carried out in the ward under the regime of the sitting BJP councilor. Also, the candidate Raj Bala assured the shopkeepers of better lightening in the vicinity and clean toilets for ladies.
Heera Negi, candidate from ward number 13, along with other party workers carried out door to door campaign in the societies. Residents apprised Tandon of their problems which he assured to get rid of on priority.
Shakti Parkash Devshali, candidate from ward number 20 today campaigned in sector 29-D and interacted with different women groups during campaigning in the ward.  He was assured complete support by them. Content with the work done by present councillor in the ward, residents of sector 29D assured full support to Devshali.
While campaigning for ward number 25, Jagtar Singh Dhillon interacted with the ladies and the elderly in Manimajra. Better facilities in and around the ward were assured by Dhillon. He said that people here are anticipating better cleanliness, maintained green parks and pedestrians’ tracks.
Ward number 3 candidate Ravi Kant Sharma today visited the residential area in sector 22 and held meetings with residents. Sharma said, “Most of the residents are complaining about the ill managed parks, sanitation and parking woes. We have assured that we will surely them to take remedial measures on these issues on priority.”
Arun Sood, Mayor, Municipal Corporation Chandigarh today campaigned in his ward and interacted with retailers and vendors in the market sector 37. Sitting councilor and candidate from ward number 8, Sood was honoured by the Central Market Welfare Association.
Pradeep Sharma, President of the association, Naresh Goyal treasurer of the association along with other members and workers weighed Arun against Gur (Jaggery). Sharma, while honouring Sood, said that we have seen his hard work and dedication as a councillor as well as the Mayor and are proud of his initiatives that he has taken in his 11-month tenure.

Posted by tricitynews online at 05:56 No comments: 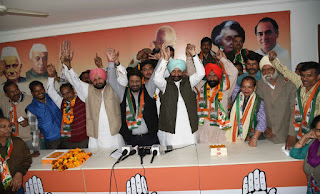 By Tricitynews Reporter
Chandigarh 09th December:- Activities pertaining to the Chandigarh Municipal Elections are on the rise. Afflicted on account of ignorance of key worker by BJP and giving preference to RSS men, Key worker of BJP Harinder Singh Bawa from Ward No 23 Ram Darbar and Hari Mohan from Chandigarh Vikas Manch, today joined Congress along with Hundreds of supporters. Above members were inducted into the party by Congress Candidate from the ward Kamlesh Banarsi Dass in the presence of Congress Committee president Mr Pardeep Chhabra and MLA from Mohali Mr Balbir Sidhu
Speaking on the occasion, MLA Balbir Singh Sidhu and Congress President Mr Pardeep Chhabra said that strength of the party has been boosted due to the joining of key BJP workers in the party. It was also said that all workers will be given full respect. Mr Balbir Sidhu said that BJP decision of demonetization is completely wrong because common man has to stand in line for hours to get their own money. In Punjab situation is such that people will come outside banks and ATM in the night and put their number in the line so that there needs of personal life are taken care off. According to Mr Pardeep Chhabra that BJP is not a party which favours public interest.
Speaking to the journalist Harinder Singh Bawa said that on one hand BJP by Demonetization has left no stone unturned to annoy and disturb common man and on the top of it by ignoring Key worker BJP has hurt their Honour. He also explains that RSS and BJP only gives ticket to sycophants while strong worker is ignored, that is why they have joined congress with hundreds of supporters. He also said that he is a pioneer in social work and also served as a chairman of the Gurudwara committee. 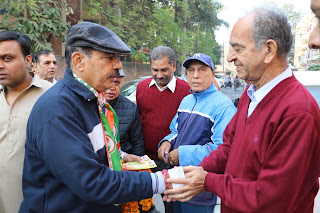 By Tricitynews Reporter
Chandigarh 09th December:- Congress Candidate Jatinder Kumar Bhatia, from ward 21 during his election campaign visited Survey of India and Indian Audit Accounts Society in sector 32,  along with his supporters and sought votes for the overall developments of the ward. He assures them of overall developments in the ward and the execution of the pending works that have been never taken up in the MC. He also assures proper maintenance of green belts and giving the sector an e-Sampark center are some of the works that are on the priority list.
Posted by tricitynews online at 05:22 No comments:

Ravinder Kaur Gujral Campaigns in Sector 44 A and B 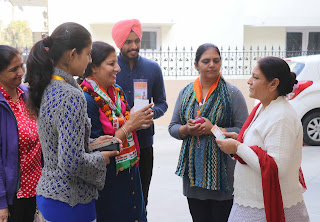 By Tricitynews Reporter
Chandigarh 09th December:- Ward No. 15 Congress Candidate Ravinder Kaur Gujral, from ward 15 today alongwith her supporters campaigned door to door in sector 44 A and B, and sought votes from the residents for the overall developments of the ward. She assures them of overall developments in the ward and the execution of the pending works that have been never taken up in the MC. She also assures proper maintenance of green belts. She assures also that sanitation is a major issue in this ward and was neglected by the previous councilor. I will make sure that this is resolved on priority.
Posted by tricitynews online at 05:19 No comments: 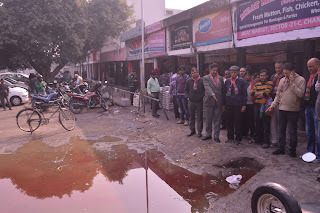 By Tricitynews Reporter
Chandigarh 09th December:- Traders of Meat Market in Sector 21 today protested following blockage of sewerage. The blockage caused a lot of inconvenience because of spilling of waste in the parking lot.
The matter was brought to the notice of Asha Jaswal, BJP candidate, by Atul Sohankar, President of Meat Market, Sector 21. After reaching the spot Jaswal called the Municipal Corporation authorities who reached the spot. The Meat Market Association extended full support to BJP candidate.
Asha Jaswal said the problem has been there since last 5 years but the sitting ward councillor Mukesh Bassi failed to take note of it. She added people of the ward during her campaigning are complaining the area councilor has not been interacting with the people of his ward 17.
She said she had earlier also brought to the notice of MC about the problems being faced by the meat market traders. She assured once elected she would work towards resolving all the problems of the area. 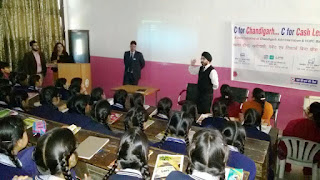 By Tricitynews Reporter
Chandigarh 09th December:- HDFC Bank Ltd., has partnered with Chandigarh Administration, a government body in Chandigarh, to promote Digital Banking. The Bank will work with various departments and educational institutes in Chandigarh to create awareness and educate various stakeholders such as employees, students, teachers, and traders on the benefits of going cashless to promote the use of digital banking channels for financial transactions. This is an endeavour to make Chandigarh a cashless city by promoting digital channels. The initiative is christener’s for Chandigarh…C for Cashless’.  As part of this initiative, HDFC Bank will reach out to more than 100 schools and colleges and demonstrate through a presentation the various transactions that can be easily, quickly, and safely conducted through Net Banking, Mobile Banking, USSD, PoS, and apps such as HDFC Bank’s Mobile app, UPI, PayZapp, and Chillr.
The Bank’s PayZapp is a payment solution that allows customers to top-up mobile phone, transfer money instantly, pay utility bills, buy grocery, movie tickets and even big-ticket purchases such as foreign holidays.Using UPI, the Bank’s customers as well as non-customers will now be able to instantly transfer funds. This is in addition to HDFC Bank’s powerful Netbanking portal and official mobile app, which allows customers to perform over 205 and 85 different types of transactions, respectively. The convenience aspect is further highlighted through services such as ‘Missed Call banking’ and ‘Missed Call Mobile Recharge’, which are touched upon in the presentation to students.
Govind Pandey, Branch Banking Head, HDFC Bank said that one of the objective of demonetization is moving the economy towards digital payments. For this to happen, it is imperative that important constituencies like the student community are made aware and educated on the various digital platforms to conduct banking transactions. HDFC Bank is happy to partner with Chandigarh Administration in it endeavour to promote digital or cash less transactions and is working relentlessly to achieve this objective.
The initiatives are part of India’s premier full-service digital bank’s strategic focus on customer convenience, access and delight, using technology as an enabler. In line with this, post the launch of ‘Go Digital’ campaign in 2014, with the ‘Bank aapkimutthimein’ offering, HDFC Bank has launched a host of new digital banking products.
These include 30 minute paperless auto loan using Biometric technology, 10 seconds personal loan on netbanking, PayZapp and recently introduced instant loans at ATM. This is in addition to HDFC Bank’s powerful Net banking portal and official mobile app, which allows customers to perform over 205 and 85 different types of transactions, respectively.

Posted by tricitynews online at 03:44 No comments: