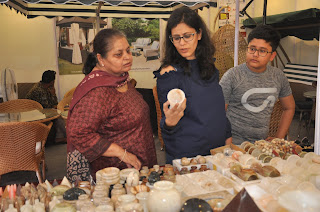 By Tricitynews
Chandigarh 28th September:- A unique showcase for Furniture & Interiors- 'Furniture & Home Décor Expo 2018', a premier exhibition for modern and contemporary designer furniture & Home decor products, has started at Parade Ground , Sec 17 here. The Expo which will be on till October 1, 2018,  is catering exclusively to architects, designers, trade professionals and discerning customers. The Expo  has been put up in response to the rapidly changing interior design demands and home decor tastes of the Indian market, by I Ads & Events, a company which specialises in putting together elaborate one- of- a- kind Expos.
Riyaz Arif, Owner of I Ads & Events, which has organised the showcase , said that the show is all about improving the indoor & outdoor surroundings of a living or workplace to make people's  lives better. Decorating your home interiors not only gives you an aesthetic feel, but it also creates a pleasant atmosphere at home. It's a must visit Expo to explore wide range of styles, sizes and finished products so that you can easily match your furniture with your current decor. The show makes it easier for you to hand pick the interiors that suit your taste and budget.
From home decor items to furniture, one will get them all at this mega Expo. About 87 stalls have been put up and are spread over a sprawling area of 20,000 Sq.ft. On display is antique furniture, office furniture, modular kitchens, massage chairs, garden furniture & more.  The products which will beautify your home interiors are a big draw. These include enamoring  glass paintings, creatively made decorative items, an array of art & handicraft items, choicest artifacts etc. The options of window panels/ blinds, chimney & hobs, rugs & carpets are innumerable.
Exhibitors are displaying modern & contemporary furniture in Italian and European interior designs for homes, offices, villas, luxury apartments, service apartments, hotels, cafes, restaurants, and other fine living spaces. What's more, there are  colorful wall-hangings, high quality beds and bed linen, elegant lamp shades, and upholstery material in unique designs and pastel colors. Home furnishings products like mattresses, curtains & blinds, artificial flowers, paintings are  beckoning visitors. Modern kitchen & bathroom accessories are available.
It is noteworthy that the Expo has come to be known as the leading 'Design-Oriented' trade fair in interior market. There is a wide range of handicrafts and artifacts at the Expo. Each handicraft is unique in design . One can also shop for foldable picnic tables, ladders and a range of health and fitness equipment.
Posted by tricitynews online at 06:07 No comments:

By Tricitynews
Chandigarh 28th September:- Big Bazaar, the flagship hypermarket retail chain from Future Group is back with its mega property, ‘Big Bazaar Public Holiday Sale’ from 29th September to 3rd October. Making it the biggest ever Public Holiday Sale, for the first time customers can enjoy free shopping throughout the exciting 5 days. During Big Bazaar Public Holiday Sale, customers can shop for Rs. 4000 and get Rs.4000 back through cashback and vouchers.
Customers will get Rs. 4000 back through a cashback of Rs.500 in their Future Pay wallet, electronics voucher worth Rs.1000, home ware & kitchenware voucher worth Rs.1000, home fashion voucher worth Rs.500 and fashion voucher worth Rs.1000.
Big Bazaar Public Holiday Sale will be held at 353 Big Bazaar, Food Bazaar, fbb and HyperCity stores at 142 cities across the country. Big Bazaar will offer exciting discounts and amazing deals on a wide range of products like grocery items, home fashion, apparel wear, electronic products and much more. In continuation to the ‘Har Din Lowest Price’ promise, Big Bazaar has dropped the price of over 1500 everyday use products.
Speaking about the Public Holiday Sale, Sadashiv Nayak, CEO, Big Bazaar said that with each season of the Public Holiday Sale, we are delighted to see the growing support of our customers towards Big Bazaar. We have not only increased and enhanced our offerings but this year introduced Free Shopping offer by giving back Rs 4000 value of cashback and gift voucher on shopping of Rs 4000. We invite our customers to begin their festive preparations by making the most of the free shopping.
Customers using HDFC debit and credit cards can also enjoy an additional 7% discount on transactions of Rs. 3500 and above. Not only this, customers can grab the latest fashion for women, men and kids at a special discount.Apart from this, customers can enjoy a seamless shopping experience by booking a Fast Billing pass on https://www.bigbazaar.com/fast-billing which allows the customer to schedule a time for easy billing.

Posted by tricitynews online at 06:02 No comments: 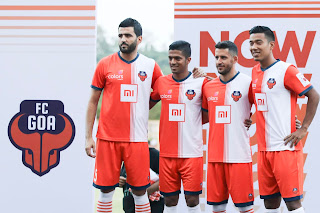 By Tricitynews
Chandigarh 28th September:- FC Goa today launched their official new home kit for the Hero ISL 2018-19 season at an event held at Bambolim Athletic Stadium. This year the Gaurs will don an orange coloured kit having worn blue in the first four editions of the tournament.
The jersey features a contrast of bright orange and white with orange stripes down the middle, and FC Goa’s trademark blue sleeve and collar trims. The orange symbolizes the Gaurs’ fire and focus to win the ISL trophy. It also symbolizes their indomitable team spirit and an attitude of always rising to the occasion. The jersey pays homage to the Gaurs’ annual campaign #NowWeRise.
The jersey launch saw players Mandaar, Coro, Jahouh and Sana take the stage to unveil the new jersey amongst much cheering from FC Goa’s unrivalled fan base. The players spoke about their excitement around the new jersey and how they are looking forward to a fantastic season.
Speaking about the new look said Sana said that the new jersey looks great. It has a powerful and aggressive look to it and I’m looking forward to donning it in the coming season. Mandaar echoed his thoughts. The jersey looks completely different from the earlier ones. Love the new look.
The jersey reveal was followed by FC Goa’s first pre-season friendly against Kolkata Giants Quess East Bengal.

Posted by tricitynews online at 05:56 No comments:

Gagan Basra Is In News Again: Starts Working on His New Projects 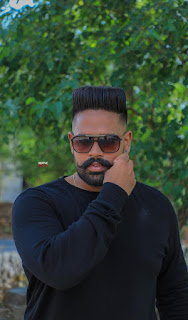 Gagan Basra has recently released his youtube channel Fdaik Records. He has been posting his work on the channel. Gagan will be posting more of his upcoming projects on his channel.

Posted by tricitynews online at 05:50 No comments: 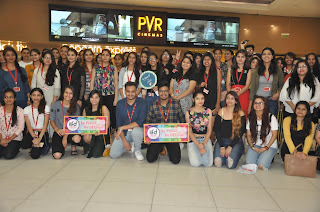 By Tricitynews
Chandigarh 28th September:- “Sui Dhaaga” the Varun Dhawan & Anushka Sharma starrer is themed on tailoring & fashion design. Budding Fashion Designers of Indian Institute of Fashion & Design (IIFD), Sec 35 here  watched the First Day First Show of the film at Elante Mall.
Vimi Vansil Director IIFD, said that the film talks about the Idea of 'Make in India' and inspired our Institute's budding designers to devote their excellence for the country, to create brands that are made by Indians and in India. Students correlated the whole movie with the concept of sewing, garment construction etc that they are learning at Indian Institute of Fashion & Design (IIFD).
The story of success & hard work with the help of 'Sui Dhaaga' (Sewing Machine) portrayed in the film was a fabulous concept and inspired the young designers not to give up in any situation.
The movie's theme motivated the fashion designing students for entrepreneurship & gave wings to their fashion dreams of having their own garments business.

Posted by tricitynews online at 05:41 No comments: 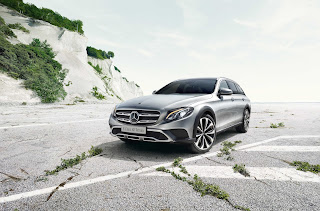 By Tricitynews
Chandigarh 28th September:- Mercedes-Benz, the leaders of the luxury car segment in India, launched the most versatile E-Class of all time – the all new E-Class All-Terrain. The All-Terrain comes equipped with a four-cylinder diesel engine that generates 143 kW (194 hp) of power and 4MATIC. A special model-specific feature, All-Terrain transmission mode, is inspired from the Mercedes-Benz GLE range which offers off-road drive settings. The comfortable AIRBODY Control suspension configuration and the large wheels with higher sidewalls increase ride comfort on rough roads making it a path-breaking masterpiece to wear the Three-Pointed Star. This first-of-its-kind vehicle from Mercedes-Benz was launched by Roland Folger, MD and CEO, Mercedes-Benz India.
Roland Folger, Managing Director & CEO, Mercedes-Benz India said that the Mercedes-Benz E-Class All-Terrain has a powerful, unique appearance coupled with go-anywhere capability which differentiates All-Terrain from a classic estate. It features a range of technologies that enhances driving pleasure and offers unmatched luxury with rugged appeal. The All-Terrain has the elegance and luxury of an E-Class combined with the practicality and versatility of an SUV, with the go-anywhere capability of an off-roader.
He further added that our strategy for the Indian market of launching more and more products from our global portfolio is very well received by our discerning customers. The E-Class has been one of our most successful products for the Indian market and we are positive of the market response for the E-Class All-Terrain as well. With this launch, we now have an array of E-Class variants from our global portfolio now available in India.
Posted by tricitynews online at 05:35 No comments:

Foodpanda Expands its Delivery Network to 13 New Cities Including Chandigarh

By Tricitynews
Chandigarh 28th September:- Foodpanda, India’s fastest growing food delivery company today shared that it has entered its 20th city, as part of its aggressive expansion across the country. In addition to the 7 cities where Foodpanda had an active Delivery Partner network in place, 13 cities have gone live starting today with Foodpanda’s Delivery Partner network on ground. The newly launched 13 cities include Chandigarh, Jaipur, Kanpur, Lucknow, Indore, Ahmedabad, Nashik, Nagpur, Mysore, Bhubaneswar, Guwahati, Visakhapatnam and Coimbatore. With Foodpanda’s robust Delivery Partner network on ground, consumers and restaurant partners in Chandigarh will benefit from a seamless experience. The Foodpanda platform will also be able to serve more customers as well as bring them a wider choice of restaurants and cuisines, with lower ETAs and efficient deliveries in Chandigarh.
Over 3,000 restaurant partners have been on boarded to the platform in these 13 cities over the past weeks alongside 5,000 Delivery Partners. Foodpanda aims to grow the number of Delivery Partners to 20,000 in the next 6 months across these cities.
Speaking on the company’s expansion in 20 cities, Pranay Jivrajka, CEO at Foodpanda India said that we are thrilled to expand Foodpanda’s delivery network to 20 cities across the country including Chandigarh. We are in the midst of a fast-paced nationwide expansion with an ambition to serve a billion Indians. We are confident that our cutting edge technology and unique local insights will make Foodpanda, India’s largest and most preferred food experience platform.
He further added that Foodpanda is also learning from Ola’s extensive experience of building hyper local solutions to solve for unique local challenges. Being a part of the Ola platform, Foodpanda will explore opportunities to synergise its services and efforts of delivering superior food experiences to cater to a wider pool of customers across these cities.
Foodpanda, had also announced its intent to on board an additional 60,000 Delivery Partners on to its network by the end of October. Tens of thousands of Delivery Partners have already been on boarded over the past month with Foodpanda expecting to achieve this target well ahead of time.
Posted by tricitynews online at 05:29 No comments: