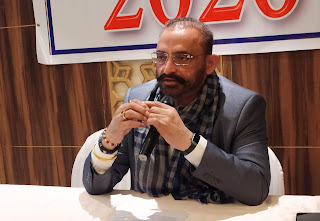 By Tricitynews
Ludhiana 07th Jan 2020:- Ludhiana loses close to 350 people every year & more than 500 are seriously injured in road accidents. The fatality rate is as high as 68% making Ludhiana second most dangerous city on the roads in the country first being our own holy city Amritsar.
Disturbed, pained & shocked at the state of affairs on Road Safety, Dr Kamal Soi Chairman of the NGO Raahat - The Safe Community Foundation & Member- National Road Safety Council, GOI , Ministry of Road Transport & Highways, decided to take it on, this very serious Socio, Psycho & Economic issue in a big way by undertaking following activities and rolled out “MISSION SAFE LUDHIANA 2020”. Mission  is to reduce Number of Deaths on the Roads by 25 % in the year 2020 & To Help in ensuring Less Traffic Jams & ensure Safe, Reliable & Ease of mobility.
Dr Kamal Soi & his NGO Raahat - The Safe Community Foundation have been taking up the issues of road safety from last about 20 years and has been recognized at State, National & International level for the work done in this field.
Addressing the media persons he said that Ludhiana is regarded as City of Jams & City of Deaths , in the in last three years only 1100 Deaths have occurred in road accidents leading to a loss of precious human lives as well as financial loss of approximately 500 crores  due to fuel wastage , man hours loss , loss of productive hours & frequent traffic jams etc.
He said that Although there are various reasons for this high fatality rate but he considers poor road infrastructure as one of the main reasons, and the same can easily be improved with little effort. He added that Ludhiana road infrastructure is bad from road or traffic engineering point of view, the design of roads are inherently unsafe (there is very little separating opposing traffic flows, eliminating cross traffic, and providing wide shoulders and traffic lanes and poor visibility compounds the problem), this we can find on Jagraon flyover, Gill flyover, apart from just separating the traffic no effort is being made for a safe infrastructure .
He emphasized that No road safety audit is done & roads are laid without proper planning . You will not find road markings & road furniture is absent from most of the roads. Everywhere in World we talk of crash barriers here in Ludhiana you will find big concrete blocks spread everywhere like a Static Death Traps on the roads. If a car/two wheeler driver hit these concrete blocks death is certain . Is it the poor knowledge & understanding of civic authorities or is it the lack of money for safe road furniture or scant respect for human life.
Dr Soi enunciated that SPEED is the single biggest factor contributing to road deaths in India & more particularly in Ludhiana. Over 40% of fatal collisions are caused by excessive or inappropriate speed. We don’t have any mechanism to enforce speed limits in Ludhiana. And the famous FOBC- Fear of being caught over speeding in Ludhiana is not there . People drive at reckless speed endangering their own & others lives. A 5km/h difference in speed could be the difference between life and death for a vulnerable road user like a pedestrian.
Dr Kamal Soi said that special focus has to be the implementation of High Security Registration Plates in Ludhiana . he urged government to expedite the process of implementation of high security registration plates (HSRP) on new as well as old vehicles as this is a issue of National Security and can go a long way in curbing vehicle borne crimes.  He informed that State Transport Department has already implemented restrictions for any transaction without affixation of HSRP. and the process of applying is now being made easier as customer can now apply HSRP online for old/existing vehicles in addition to implementation of appointment system for affixation of HSRP , but implementation of HSRP on Old vehicles and lack of enforcement still remains a major challenge. Temper proof HSRP plates are affixed with non-removable and non-reusable snap locks and their Reflectivity index  improves vision specially at night and during foggy season.
Posted by tricitynews online at 04:03 No comments: 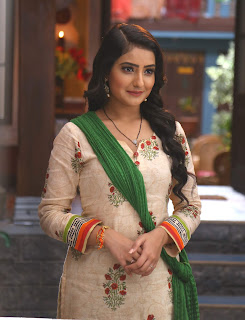 By Tricitynews
Chandigarh, 07th Jan 2020:- It is often said that no one teaches you how to be a mother; you are simply thrown into motherhood’. Same is the belief of AkshitaMudgalas Gayatri, who is currently portraying the role of a mother on Sony SAB’s family entertainer Bhakharwadi.
With the entry of Abhijeet (Gautam Rode) and his son Krishna (Vihaan Lodha), Gayatri is thrown into motherhood as Krishna believes Gayatri is his mother. While Gayatri is shocked in the beginning, she eventually starts getting attached to the kid seeing his love for her. When asked how difficult it is playing the role of a mother at a young age, Akshita said that playing a mother on screen was really emotionally challenging for her.
She added that considering Gayatri’s nature, she has got really attached to Krishna. As Akshita, it was difficult for her to play a mom. But as she has mentioned previously as well, She relate with Gayatri, Sharing further about her experience of playing an on-screen mother, she said that she remember one scene where Krishna is sleeping on her lap, holding her tight, and in his sleep he asks Gayatri‘Aap Meri Maa Ho Na?’ Gayatri was supposed to say ‘Yes’ with very heavy emotions and when the director narrated this scene to her and asked her  to just imagine the kid and then deliver the dialogue, She instantly got emotional and cried. When she saw the telecast too, she was emotional and had tears in her eyes. So, she feels she has that motherhood within her and she believes every girl has it in her.
Talking about her preparation for this role, Akshita shared that at our homes, we see how our mothers care about us and loves us. There are a lot of little things a mother does like if we come home late at night, from work, she gets up early to wake us up on time. There are many different elements that come with this word‘Mother’, including love, affection, anger and pampering. So, she took inspiration from her own mother observing how she takes care of her and her siblings and she hope she has done justice to the role of a mother as it is one of the purest relationships in this world.
Posted by tricitynews online at 03:54 No comments: 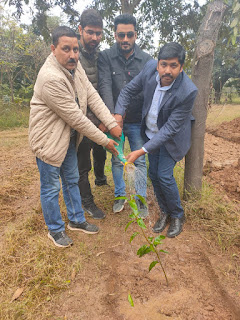 By Tricitynews
Panchkula 07th Jan 2020:- Panchkula based non-government-organization(NGO), Sarthak Foundation conducted a sapling plantation drive as part of its social responsibility. Saplings of mango trees were planted.
Sarthak Foundation’s President Lokesh Saurav Sharma said that he celebrated his birthday by conducting a plantation drive. He strongly believe that all of us should contribute to society on birth and other anniversary celebrations by conducting environment protection drives, distributing items of need to underprivileged residents etc. This will be the real celebration, which will benefit the country.
On this occasion Prabhu Nath Shahi, President of National Veteran Forest Forum, a young social worker Ankit Dubey and environmentalist Hitesh Verma were present among a host of others. All took an oath to protect the fragile environment.
It was also announced that the Sarthak Foundation’s theme for 2020 will be environment protection.
Posted by tricitynews online at 03:42 No comments: 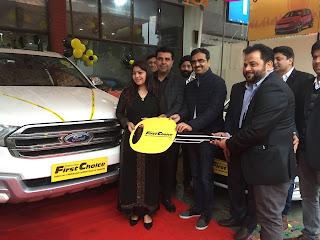 By Tricitynews
Chandigarh, 07th Jan 2020:- Mahindra First Choice Wheels Ltd. (MFCWL), India’s No. 1 multi-brand certified used car company today added 4 new outlets in the Tricity area to its network. Ashutosh Pandey, CEO& MD of  Mahindra First Choice Wheels Ltd. While at the inauguration at Industrial Area outlet said that we are delighted to welcome our dealer partners in Chandigarh, Panchkula and Bhatinda to the Mahindra First Choice Wheels family. Tricity has great potential for pre owned cars and we hope to include more dealerships in this ecosystem to create and develop an organized aftermarket. We want to capture a significant market share in the growing used vehicle segment.
Suraj Kumar , Chief Business Officer – Retail , Mahindra First Choice Wheels Ltd. said that the used car market has seen a steady growth in the past year. We feel that the advantage of pricing that used car buyers get over a new car has made it a great option for many first time car buyers who are increasingly attracted toward buying used cars.
Rajiv Jain, Dealer Principal MFCWL, M/s IDEAS, said that Mahindra First Choice Wheels is a pioneer in the used vehicle industry and through this association we would like to provide good quality certified cars with best in class warranty. We would also provide customers with a one stop solution for all kinds of used vehicle related services including selling, buying, trade-in, financing and insurance, etc.
Vikrant Garg, Dealer Principal MFCWL, Automobia Wheels said that the used car market in Panchkula is growing over the years and this partnership will help us to further expand our business through comprehensive products and technology enabled solutions offered by Mahindra First Choice. This association will also help us solve the challenges we face in our day to day opertaions.
Rajesh Gilhotra, Dealer Principal MFCWL, United Autowheelz, said that we feel there is lot of need in the market and through this association with the industry leader in the used vehicle space we would want to offer our customers an opportunity to buy great quality certified cars.
Over the years, Mahindra First Choice Wheels has not only emerged as India’s leading used car company, but has also contributed to the creation of a used car ecosystem by bridging the wholesale and retail channels while leveraging physical and online infrastructure.The company is driven by its mission to transform the way used cars are retailed and has introduced several innovations along the way. The company has received an excellent response from the C&D category towns as well.
The list of innovations include developing a unique franchisee-based business model, selling certified multi-brand used cars under warranty and offering the most comprehensive warranty product available on used cars in the country.
MFCWL has also developed a variety of industry first products which use technology to simplify used vehicle operations. The company has recently launched innovative products which are smart, simple, standalone tools that solve many challenges for every kind of stakeholder including consumers, dealers, financiers, leasing companies and manufacturers.
In short, buying a used car from Mahindra First Choice offers several advantages, including quality assurance, safety and a hassle-free driving experience. To give complete peace of mind to the used car buyer, the company has Warranty products like WARRANTYFIRST, CERTIFIRST and CERTIFIRST+.
Subject to specific terms and conditions, WARRANTYFIRST provides Warranty for all the major mechanical and electrical components of the car. The concerned components are covered for a period of 12 months or 15,000 km, whichever is earlier. The CERTIFIRST Warranty covers the car’s Engine and Transmission for a period of 6 months or 7,500 Km, whichever is earlier while CERTIFIRST+ covers for a period of 12 months or 15000 kms, whichever is earlier.
The Warranty products come with the facility of 24X7 Roadside Assistance across the country. The 24x7 Roadside Assistance, subject to specific terms and conditions, assures the certified used car buyer that should the car breakdown, he will be provided assistance.
The Warranty product gives tremendous peace of mind to buyers of certified used cars. Mahindra First Choice has a website - www.mahindrafirstchoice.com - which provides complete assistance to customers wishing to buy or sell a car. Mahindra First Choice also has retail finance relationships with major banks like Mahindra Finance, HDFC, Kotak Mahindra and ICICI Bank for helping consumers buy their dream cars through loans.
The used car market in India is expected to reach between 6.7mn/year to 7.2mn cars/year by FY22.The current slowdown notwithstanding, it is expected that the used car market will become almost double the size of the new car market in the next 5 years.
Posted by tricitynews online at 03:36 No comments: