By Tricitynews
Chandigarh 26th December:- The 3rd day,  of the Dev Samaj Mahotsava going on in  the premises of Dev Samaj College of Education, Sector 36, Chandigarh, started with the soulful Bhajan,'Param Lakshya Guru Puran Hove'.
In keeping with the Dev Samaj philosophy of conducting activities beneficial for society, a blood donation camp was organized by the volunteers of Dev Samaj institutions with the help of GMCH, Sector 32, Chandigarh. The camp was hugely successful with 73 units of blood  donated.
Dr. Agnese Dhillon, Principal, Dev Samaj College of Education said that such activities were especially undertaken during the Mahotsava to develop altruistic attitude among students. More than 250 volunteers came forward for this noble cause. Free Medical and Dental camps were also organized and more than 150 persons benefitted from them. 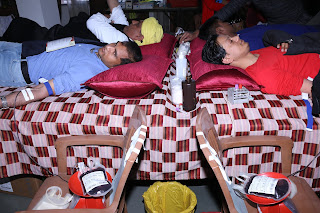 Apart from the blood donation camp, the day witnessed wide ranging activities like a sonorous performance by the band orchestra comprising more than 100 students of the Dev Samaj schools in Chandigarh, Ferozepur, Delhi, Gurgaon and Akbarpur. A drama highlighting social and moral values enacted by the students of Dev Samaj Modern School, Nehru Nagar and Dev Samaj Modern School, Sukhdev Vihar, New Delhi was also held.
The drama, 'Lapata Hai' presented in the evening session sensitized the audience to the need for safeguarding innocence and integrity. The play moved the audience to tears by the characters’ emotional rendering of the relationships of parents and children, employer and employee, etc. The play was directed by Manoj Madan, Principal, Dev Samaj Modern School, New Delhi. 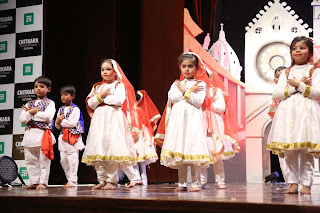 By Tricitynews
Chandigarh 26th December:- Annual Function of Chitkara International School (CIS) is well recognized for its magnificent enactment and grand endeavour. Every input and effort is put in by the School to attain the finest of performance and reach the sparkling zenith. With sprightly curtain calls, with huge pomp and show, CIS hosted a 6 day long, 8th Annual Function, “Facade- The Structural Extravaganza”, which commenced on 16th December 2018 at the school premises amidst great fanfare and gusto.
Each day of the function took a head-start, with the ‘structural footing’, which entertained the audience through rapturous performance. The programme further picked the pace with ‘Casting the Building Block’, analogous to ceremonial lighting of the lamp. In this ceremony, Dr Madhu Chitkara, Chairperson, Chitkara International School, placed the topmost building block to the CIS’s school emblem as the theme was directed towards structural extravaganza.
The event revolved around the beautiful interpretation of various eras and the architecture of the same. The school choir followed by Qawali won a huge round of applause from the audience. The students manifested Ancient Egyptian, Roman, Gothic, Renaissance, Mughal, Neo-classical and Modernist period through their spell-binding dance performance. The senior wing students presented an amalgamation of celebrated structures of India comprising Konark temple, Ajanta and Ellora Caves and Sanchi Stupa through a dazzling dance performance.  Apart from this the fillers on a beautiful rendition of the piquant-inferno, “Yampuri” evoked lot of interest from the spectators.
Furthermore, the Annual Report was read out by Ishiqa Sharma, Joint secretary of the school. In her report, Ishiqa highlighted the achievements of the school in all spheres of academics and co-curricular activities followed by the outlook on the International exposure provided to the students. She also listed the awards that the school had received for its infrastructure and other academic and co-curricular activities. Throughout the event, the well researched Power Point Presentation running at the side screens filled the audience with bits of information relevant to the acts of that particular period. The each day’s function concluded with a vote of thanks and warm smiles on everyone's faces.
Expressing her contentment and take on the significance of the Annual Function, Dr Niyati Chitkara, Principal, Chitkara International School, added that the annual event is a marvellous platform for every child as it provides the needed spotlight and confidence to the students. It’s an effort to inoculate inspired learning through dance, drama, art and music and thus it acts as learning beyond the classroom. Through this event, the school wishes to showcase and boost the best within every child. The larger than life portrayal of characters, the vibe, the magic and the experience of our Annual Function speaks volumes about the hard work coupled with the teamwork of the faculty and the students.
Posted by tricitynews online at 03:22 No comments:

All Contractual Karamchari Sangh to Hold Maharally with Families on January 24, 2019: Gives Notice to Chandigarh Administration,Prime Minister And Home Minister

By Tricitynews
Chandigarh 26th December:- All Contractual Karamchari Sangh gave notice of Maharally  with families of Contractual and Outsourcing Workers on 24 January 2019 to Chandigarh Administration,Prime Minister And Home Minister.
All Contractual Karmachari Sangh ,U.T.,Chandigarh gave notice of Maharally with Families in lieu of their genuine demands on 24.1.2019 at Rally Ground.
Earlier in November Karamchari sangh demonstrated through five Point agenda program like  Press Conference,Black Day on Constitution day, Candle March Protest and Black Flag March Protest etc on World Human Rights days while raising the demands of 20,000 Contract Employees and Outsourcing Workers fighting for the cause of Equality,  Social Security and Security of tenure in the absence of any Central policy since 20 years in Chandigarh.
Karamchari Sangh announced this Maharally with Families as administration is not listening to their genuine demands despite of member of parliament assurance also.
All Contractual Karamchari Sangh is raising the voice since long against the exploitation and discrimination of qualified youth and intelligentsia in contract and outsourcing system and is demanding security of these employees and to stop hire or fire policy.
Karamachari Sangh gave notice to Prime Minister and Home Minister to look into this matter for necessary action.

Posted by tricitynews online at 03:17 No comments:

By Tricitynews
Chandigarh 26th December:- Known as one of the leading five-star properties of City Beautiful, Taj Chandigarh has over the last decade come to being synonymous with luxury. Right from its well-appointed rooms to the conference halls along with banquet options, dining selections, spa, gym and a roof top pool, the hotel offers it all. Apart from all this grandiosity, it is also a fact that Taj Chandigarh has earned the reputation of throwing the best New Year parties in the city.
This year too, they come up with an array of parties that are sure to leave the guests delighted as 2018 comes to an end. Mumbai Takies is being hosted at the massive grand ball room of the hotel. The New Year party is a must go for those who love the city of dreams for Taj Chandigarh is definitely bringing it to City Beautiful. Right from creating an elaborate Mumbai ambience to actually laying out an extensive buffet that is partially inspired by the cuisine of the region, this night to going to cater to it all. With free flowing beverages and delectable snacks, the evening is destined for a gourmet extravaganza. DJ KD takes the night on a high with his music as international dance performances excite further. Priced at 14,000/- per couple, it is a New Year party that is sure to give you a grand entry into 2019.
For those who enjoy fun and games, the hotel is hosting the New Year Pirate Party, which brings in some fun props and décor to match. Here too the beverages and snacking are unending and the global buffet is extensive, which will set the ship a-sail to meet 2019. A live band performs through the evening and the pirate guests dance away the night. At 10,000/- per couple, the evening is perfect in more ways than one.
Looking for something soft and quiet on New Year’s Eve. Taj Chandigarh’s Sparkling Black Lotus New Year Night is the place for you. A sit down seven course dinner served at the table with the sparkling flowing freely and soft music and candlelight adding to magic of the evening, this is an ideal end to 2018. Guests can book at 8,000/- a couple since the tables are fairly limited at this exclusive dining.

Posted by tricitynews online at 03:06 No comments: