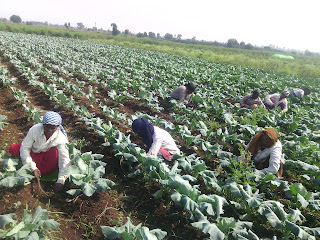 By Tricitynews Reporter
Chandigarh 06th December:- DestaGlobal, an agri-input company, has successfully concluded the second edition of “Desta Krishi Parivar”, India’s online photography contest for farmers. The contest, aimed at encouraging farmers to embrace technology, witnessed a good reception from all over the country with the contest receiving more than 5.6 thousand registrations on the website and over one lakh votes. Additionally, the website received more than 1.5 lakh visitors. The contest was also received around 1 lakh likes on its Facebook page.
Mohnish Sharma, CEO, DestaGlobal said that we are overwhelmed to see such a positive response for the second edition of Desta Krishi Parivar. The focus of the pan India contest was to educate the farmers about digital transformation which is currently revolutionizing India. As technology is increasingly playing an important role in agriculture, we strive to be at the forefront of innovation and plan to support the farmer during this technology revolution.


In the two month-long contest, the users had to upload farming related photographs on the website and the highest voted photograph was announced as the winner. The contest had 11 categories and the winners of each category will be awarded with cash prizes up to one lakh rupees. Farmers from 21 states participated in the contest by uploading photographs of their farms, equipment, yield, livestock and more.
Posted by tricitynews online at 04:53 No comments:

Alliance Air to Connect Bathinda with First Ever Flight from Delhi

By Tricitynews Reporter
Chandigarh 06th December:- To bolster the regional connectivity under its ‘Connecting India’ program, Alliance Air, wholly owned subsidiary of Air India is all set to commence operations with first ever flight to one of the oldest cities of Punjab, Bathinda from Delhi starting 11thDecember. The flight will be a boon for the city as currently there is no air connectivity offered to passengers from Bathinda.
Connecting Bathinda with Delhi, Alliance Air with first ever flight 9I 621 shall operate thrice a week on Wednesday, Friday andSunday with its 70 seater ATR-72. The flight will take-off from Delhi at 1215hrs and reach Bathinda at 1345 hrs. The return flight 9I 622 will fly out from Bathinda at 1415 hrs and will reach Delhi at 1545 hrs.
This flight will immensely benefit residents of Bhatinda with seamless connectivity to other major domestic and international networks via Delhi. This flight will offer great convenience to many as Bhatinda is home to large number of Non Resident Indians living abroad, who often visits the city.
Posted by tricitynews online at 04:48 No comments: 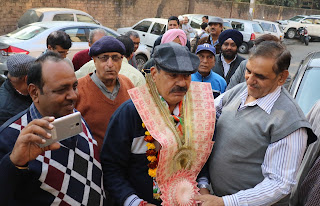 By Tricitynews Reporter
Chandigarh 06th December:- Jatinder Kumar Bhatia, Congress Candidate from ward 21(Sector 32, 46) visited different parts of ward along with his supporters and sought votes for the overall developments of the ward. Jatinder Bhatia also interacted with the senior citizens and ensured that he will be available in the ward 24x7 for them. He assures them of overall developments in the ward and the execution of the pending works that have been never taken up in the MC. He also assures completion of open gym, Joggers track and giving the sector an e-Sampark center are some of the works that are on the priority list.
Posted by tricitynews online at 04:42 No comments:

By Tricitynews Reporter
Chandigarh 06th December:- A five day workshop on “Research Methodology and Applications of SPSS in Environmental Health” commenced on Monday, 5 December 2016 at School of Public Health, PGI Chandigarh. The workshop is being financially supported by Department of Health Research (DHR), Ministry of Health & Family Welfare, New Delhi. Dr. Ravindra Khaiwal, Associate Professor of Environmental Health, School of Public Health, PGI is coordinating the programme.
More than 20 participants having medical and environmental background are attending this training programme. Resource person of the programme includes Dr Madhu Gupta, Dr PVM Lakshmi, Dr. Sonu Goel, Dr. Shankar Prinja from School of Public Health, PGI, Chandigarh and Dr Suman Mor, Co-ordinator, Centre for Public Health, Panjab University, Chandigarh having expertise in Research Methodology Techniques. The experts will provide training on 'framing research questions', 'development and validation of questionnaire', 'qualitative/quantitative research techniques', and 'data management' including hands on training on statistical analysis using SPSS software.
Dr Ravindra Khaiwal, Associate Professor of Environment Health mentioned that this training is specially designed for the professionals who wish to acquire the knowledge in the area of environmental health and sharpen their analytical skills using the application of SPSS. He also highlighted that the training programme will enable the participants to define research problems and develop a suitable methodology for addressing the key public health issues. The participants will also learn about use of various data analysis techniques in research, designing the study, collecting data, issues involved in coding, editing, analyzing and interpreting the data collected.

Posted by tricitynews online at 04:33 No comments: 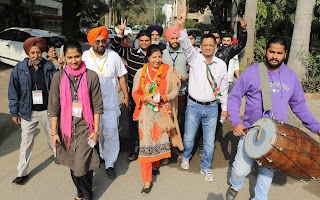 By Tricitynews Reporter
Chandigarh 06th December:- During door to door campaigning in ward number 15 i.e. sector 34, 35 and 44, Congress Candidate Ravinder Kaur Gujral visited sector parts of sector 34 and 44. She also met with the peoples in the parks during morning. She also met the ladies in the temple s in the area and assures them of overall developments in the ward and the execution of the pending works that have been never taken up in the MC.
On another side her husband Adv. A S Gujral also visited different parts of the ward and seeks votes in favor of her wife.
Posted by tricitynews online at 04:29 No comments: