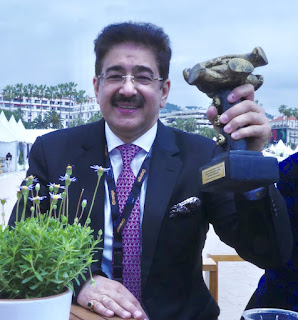 By Tricitynews
Chandigarh 11th June:- Renowned film TV and media personality of Republic of India Sandeep Marwah President of Marwah Studios has been honored with Life Time Achievement Award by A F I World Cinema Initiative at American Pavilion at 72nd Cannes International Film Festival in a grand function.
Princess Angelique Monét   President of the organization said that Sandeep Marwah may not be that old but his contribution to World Cinema is immense. Founder of Noida Film City, Marwah Studios, Asian Academy of Film and Television, Marwah has brought millions of people together and propagated Love, Peace and Unity through Art and Culture.
Titled with Global Cultural Minister, Global Green Ambassador, Global Peace Ambassador, Global Management Guru Sandeep Marwah is Chancellor of the First Film University of India.
Teacher to 15000 Media Professionals, Producer of Largest number of Short Films 2500, President of 10 best International film festivals in India, Gunnies World Record Holder, recipient of 600 awards from all over World, Chair of 100 film, TV and media organizations and representative of cultural Associations for 50 countries of the World Sandeep Marwah deserves much more than this.

Posted by tricitynews online at 22:11 No comments: 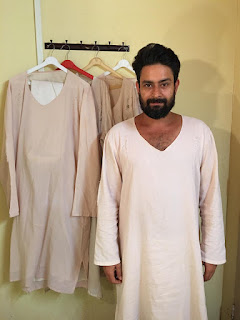 By Tricitynews
Chandigarh 11th June:- Obsession for clothes is not rare. Then and now, people can be seen keeping and owning a good collection of costumes in their dearly built king-size wardrobes. But, actor Abeer Sufi goes a step ahead with this interest. Abeer’s look of Sai Baba in Sony Entertainment Television’s Mere Sai–Shraddha Aur Saburi is fixed which is, a white long kurta with a Kafni which he carries in each and every scene of the show, but it is an amazing fact that the costumes he wears day-by-day are unique in its own way.
India’s favourite show, Mere Sai, has managed to indulge the nation in Sai Bhakti and the fan following of the show is increasing with each passing day. The show’s lead actor, Abeer Soofi, has captivated the viewers’ attention by playing Sai in the best way possible and he has also received a lot of appreciation for his performance and continues to collect the love of all his well-wishers in his kitty. While viewers see Abeer in the same white long kurta and Kafni throughout the show, not many know that he has a collection of close to 93 costumes which make his similar look unique every day. Also, with summers going on, Abeer has to shoot in heat which makes it difficult for him to be in the same set of clothes for an entire day. Therefore, the production decided to have the collection of same costumes for his character, so that it is easy for him to change during shoots without getting uncomfortable with heat and sweat in the same costume and maintain the sequence.
Giving more information on the same, Abeer confirmed that with summers setting in, it was getting difficult for me to carry on with just one set of costume for an entire day. Almost all my scenes are outdoors and due to summers, I am prone to sweat which may spoil the scene. That’s the reason I have to change my costume multiple times a day for which at least 10 costumes are kept ready on the sets. Therefore, now I have a collection of 93 same costume of Sai baba’s character.
Posted by tricitynews online at 05:48 No comments: 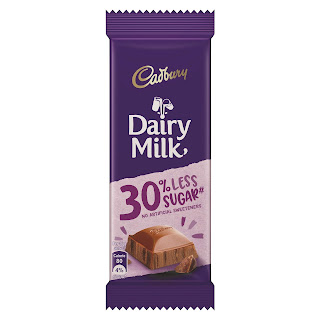 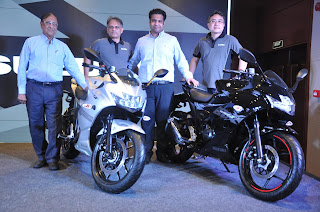 By Tricitynews
Chandigarh 11th June:- Marking its entry into premium 250cc motorcycle segment with a bang in a national launch in May 2019, Suzuki Motorcycle India Pvt.Ltd (SMIPL), a subsidiary of the two-wheeler manufacturer, Suzuki Motor Corporation, Japan today presented its much awaited GIXXER SF 250 - a sport touring motorcycle, to the bike aficionados of Punjab,  Haryana and Himachal Pradesh. Along with it, Suzuki Motorcycle India also introduced the all new GIXXER SF to the motorcycle enthusiasts. The Suzuki GIXXERSF series is available in fully fared versions appealing to the distinctive personality of a spirited rider.GIXXER SF 250 will be available only at “Suzuki Premium.”
In its true sense, Suzuki GIXXER SF 250 is ‘Born of Greatness’ as it descends from the makers of legendary motorcycles: GSX-R and Hayabusa. The new GIXXER SF series promises to offer advanced technology, premium styling and superior product quality to its patrons.
Commenting about the launch of new products, Yoshiaki Harada (G.M Product Planning) Suzuki Motorcycle India Pvt. Ltd. said that we are both delighted and excited to present the all new Suzuk Igixxer SF series in the premium motorcycle segment as part of our on-going commitment to the Indian market. He added that GIXXER SF is one of Suzuki’s flagship products in India and increasing its portfolio will allow us to enhance Suzuki’s much-loved brand presence in the country. Designed to stand out with its cutting-edge style and unmatched power Suzuki GIXXER SF is here to win heart of the sporty and enthusiastic rider.
Speaking about the launch, Deepak Mutreja, G.M Sales, SMIPL said that India is the world’s largest two-wheeler market, and this market has now started demanding premium products, especially above 200cc engine displacement. The GIXXER SF Series offer the perfect solution to the customers looking for a sports tourer. He further said that the new GIXXER SF series offer a sharp design, sporty looks along with a powerful performance, catering to the needs of the consumer. With this new launch, Suzuki will be able to further enhance its presence in the premium motorcycle segment in the country.
On this occasion Zonal Manager, Sevice-Basant Swaroop, Regional Manager, Service -Gurpreet  Singh,  Assitant Manager, Service-Anshu Dwivedi, Swami Suzuki  Managing Director- Shubham Garg and Swami Suzuki  General Manager–W.John were also present.
Posted by tricitynews online at 05:36 No comments:

By Tricitynews
Chandigarh 11th June:- EaseMyTrip.com, (EMT) one of the leading players in the Online Travel Aggregators segment has expanded its footprint into the UK Market. In its pursuit of adding itineraries and entering into new markets, the company has now set up a new office via subsidiary company of EaseMyTrip – EASEMYTRIP UK LTD at London in UK.
EMT has strong footprint in the Indian market. It registered a turnover of Rs.1956 Crore in FY 2017-18 with the total ticket sales exceeding to more than 50% in FY 2018-19 & a customer base of more than 8 million direct customers.
Commenting on the development, Nishant Pitti, Co-Founder & CEO of EaseMyTrip said that UK is the 6th most popular tourist destination in the world, with more than 40 million people visiting the country in 2018. We foresee immense potential in this country for travel & tourism sector which will thus boost our business. Our subsidiary company EASEMYTRIP UK LTD in UK is focused at providing the best travel experience to our customers. Furthermore, we can also customize travel itineraries for UK by analyzing the budget and requirements of our clients.
According to Visit Britain report, foreign tourists spent US$31.93 billion in the United Kingdom in 2017. In 2017, there was a sharp rise in the number of visitors from China, Australia, the Middle East, India and the US that produced a 9% growth in total spends. The year 2017 observed a record 562,000 visits from India to the UK, which was 35% more in comparison to the previous year. Indian travelers spent a record £454 million in the country, thus showing the absolute popularity of the country’s beauty and culture amongst Indians.
Along with air products, the company is also strengthening its position with non-air products like hotels, bus and train booking. In its quest to offer the entire gamut of travel related services, the company recently introduced IRCTC Train Tickets on its platforms. They tied up with China’s VariFlight for real-time GPS tracking of flights to ensure technologically advanced services to its customers thus enhancing the user experience. 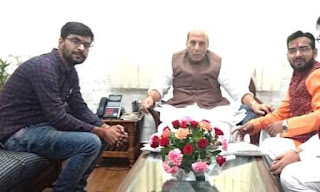