Magma to offer Scholarships to Meritorious Students from Underprivileged Families

By Tricitynews
Chandigarh 13th June:- Magma Fincorp Ltd., has announced M Scholar, a well-recognized scholarship programme for meritorious students from underprivileged families. During the past three years, Magma had awarded scholarships to 200 students.
India is a young country aspiring to grow.  While the primary and upper primary education is free in India, a significant number of children drop out of the school because of their poor socio-economic background. Some of the reasons for this drop out include Poverty, lack of opportunities for students living in villages and poor infrastructure facilities especially for the girl children in remote parts of the country. This results in school and college drop outs of students who are otherwise talented and meritorious.
Keeping alive the motto of ‘investing in the smallest dreams’, Magma started offering financial assistance in form of scholarships to such students in 2015 under “M-Scholar”.  Students are selected on the basis of their academic performance and socio-economic background.
Speaking to the media, Kaushik Sinha, Vice President, CSR, Corporate Communications & Admin, Magma Fincorp Ltd, elaborated on the initiative and the application procedure. “Magma is happy to announce a new batch of M-Scholar this year. He added that M Scholar is helping shape destiny of 200 meritorious students from underprivileged families and a new batch of students will now benefit from this.

Posted by tricitynews online at 06:24 2 comments:

By Tricitynews
Mohali 13th June:- Godrej Appliances, one of the leading players in the home appliances segment has strengthened its manufacturing capacity in Mohali by doubling the production of its washing machines to 4 lakh units per annum. This is part of the Rs. 400 Crore capacity expansion plan that the company announced last year. This will allow the brand to introduce new variants and increase flexibility for multi model production of washing machines. Furthermore, the new capacity will generate additional employment for 100 people, 75 of whom are women, who will operate the new washing machine line.
Kamal Nandi, Business Head & EVP, Godrej Appliances said that we have always been at the forefront of innovation and customer delight, testimony to which is the immense trust that customers put in our brand. Godrej Appliances is already the fastest growing brand in the washing machine category. The new capacity will help us achieve our target of 25% growth in Washing Machines. With the new assembly line at our Mohali plant, we have doubled our production capacity of washing machines from 2 lakh units to 4 lakh units, taking our annual production of washing machines up to 6 lakh units. At Godrej Appliances we are on the fast track to growth, growing faster than that of the industry year on year, and this capex investment is in line with our vision of being amongst the top 3 in the Indian Appliance industry by 2020.
Godrej Appliances has been focusing on premiumsation, and entered the Front Load washing machine segment last year with an advanced model that incorporates the unique Allergy Protect technology. The brand also focuses on premiumization across segments by introducing innovative technologies and advanced features in its products. Godrej Appliances also launched ‘Allure series’, a fully automatic top load washing machine with ‘Roller Coaster wash’ technology. In the Semi-Automatic segment of washing machines, Godrej Appliances was the first brand to launch a model with a steel drum, an industry break through. The plant will see similar advanced products being manufactured in coming months particularly in the washing machine segment.
Hussain Shariyarr, Manufacturing Head, Godrej Appliances, said that since the inception, manufacturing is one of the core strengths of Godrej Appliances, which not only helps in driving profitability but also helps in building its brand image. Both the manufacturing units - in Shirwal as well as Mohali are considered benchmarks in their respective regions and are also Platinum Green Co. rated by CII. Furthermore, the plant has the ability to generate 1 MW of solar power installed that would take the renewable energy share to 30%. An online monitoring system has also been installed to track the power generation on real time basis.

Posted by tricitynews online at 05:55 No comments:

By Tricitynews
Chandigarh 13th June:- North Zone Cultural Centre (NZCC), Patiala (Ministry of Culture, Govt. of India) in collaboration with Chandigarh Sangeet Natak Akademi, Chandigarh is organising ‘Jammu & Kashmir Theatre Festival 2018’ at Tagore Theatre, Sector 18, Chandigarh from June 13 to 15, 2018. It is for the first time in the history of the country that a theatre festival dedicated entirely to one state is presented in other state.
The festival opened with a Musical Play ‘Gagan Damama Bajyo’ based on the life and ideology of Shaheed Bhagat Singh written by Piyush Mishra and directed by Abhishek Bharti, Nritya Natya Kunj Cultural Society, Jammu. The Play highlights the fact that though the British rule has ended yet another form of tyranny has begun. For the common man only the rule has changed but their exploitation and harassments have not ended. The play traces the relevance of Shaheed Bhagat Singh ideology in the present scenario. The play raises a question-“Is this the India of Bhagat Singh’s dream?”
The play starts in 1965 in Delhi where Battukeshwar Dutt a comrade is hospitalized and Markand Trivedi asks him “Is today’s India is really the India of Bhagat Singh dream”. The story of play then goes back to 1921 and again come back in 1994 and ends in Kanpur, where Shiv Verma another comrade of Bhagat Singh is alive. ‘Gagan Damama Bajyo highlights the ideological learning of Bhagat Singh and also tries to project his thinking pattern. Relying on the combination of Music, Dance and visual effects relating to body Theatre this play is designed as the collage comprising of the important events of Bhagat Singh’s life. With the synchronization of chorus and transformation to individual character their movements and the change over from one scene to another was affected without much ado. Director of the play very creatively portrayed prototype of socio- political scene of modern India against the background of Bhagat Singh’s Martyrdom.
Ajay Singhal, Director, Haryana Kala Parishad, Haryana appreciated all the artists and Director of Nritya Natya Kunj Cultural Society, Jammu for this beautiful play presentation in the presence of Prof. Saubhagya Vardhan, Director, NZCC, Patiala and Chairman, Chandigarh Sangeet Natak Akademi, Sh. Kamal Arora and other dignitaries. NZCC, Patiala honored all the artists with Certificates.
Prof. Saubhagya Vardhan has informed that the play ‘Ek Aur Birbal’ directed by Sh. Rohit Bhatt, Vemedh Rangmanch, Jammu will be staged at Tagore Theatre, Chandigarh on June 14, 2018.
Posted by tricitynews online at 05:51 No comments: 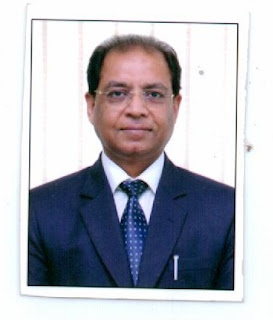 Posted by tricitynews online at 05:45 No comments:

By Tricitynews
Chandigarh 13th June:- National Population Education Project (NPEP) is funded by MHRD and implemented by NCERT in India for quality improvement in Govt. Schools under which various activities i.e. Advocacy and training of Teachers, Role Play, Folk Dance, Model Exhibition, Poster making and Nukkad Natak etc. are being conducted for awareness of adolescents. In UT Chandigarh the Programme is being implemented by State Council of Educational Research and Training (SCERT).
State Core Committee meeting of National Population Education Project (NPEP) of SCERT was held today for approval of its Annual Budget 2018-19 under the chairmanship of Education Secretary B. L. Sharma. During the meeting Director, SCERT apprised the committee members about the activities conducted in 2017-18 and presented Plan of Action for the session 2018-19. Annual News Letter ‘SCERT SANDESH’ was released by the Education Secretary B.L. Sharma,  in the presence of Director Higher Education R.K. Popli, Chairman Advisory Committee PEP.

Posted by tricitynews online at 05:41 No comments: 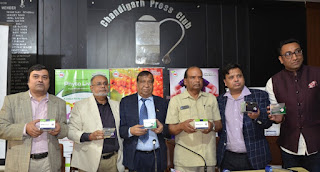 By Tricitynews
Chandigarh 13th June:-Primok Naturelle Care Pvt. Ltd, launched the first-ever Seabuckthorn based Phyto-medicines in Chandigarh today.
Commenting upon the launch, Devender Kumar Mittal, chairman, said that it tooks around  30 years of research, which is been initiated by former President of India  Dr. A.P. J Abul Kalam ,when he was chairman of DRDO, followed by BHU ( Banaras Hindu University ), SRM university, chennai, and Adesh university Bhatinda, under his guidelines, for seabuckthorn. We take proud to launch Seabuckthorn based Phyto medicines first time in India. He said that the best thing about these medicines there is no side effect.
Dr. K.N.Singh, CEO & Director Medysis, Bio-Tech, Himachal Pradesh said that Seabuckthorn is valued for its antioxidant, cardio-protective, anti-atherogenic, anti-diabetic, hepatoprotective, anti-carciogenic,immunomodulating,antiviral,antibacterial,anti-inflammatory and vascodilating effects. Seabuckthorn is a storehouse of vitamins and nutrients and is aptly known as “nature’s bounty” to the mankind.
Primok Directo Sanjay Goel from Gujrat said that diseases related with Gas, Liver & Diabetic increased day by day and our medicines Dibefin, Liverc & Ancid controls these diseases.
Director A.K. Shrivastav, Goa said that the magical fruit, seabuckthorn found in Himalayas. The formulations are patented in USA, France, Germany and Italy. The clinical trials of phyto-medicine have been conducted over 30,000 patients and showed remarkable improvements in the conditions of patients with various diseases like Diabetes, Blood pressure, Obesity, Liver and arthritis.
Director Sanjay Bazari said that Seabuckthorn is an extremely rich source of vitamin A, B1, B2, C, E, K and unsaturated fatty acids like Omega-3, Omega-6, Omega-9 , Omega-7 and Palmitoleic acid, Folic acid, major saturated fatty acid like Palmitic acid Stearic acid along with monounsaturated fatty acids.