By Tricitynews
New Delhi 04th December:- A drum opera from China, Live Loop performance from Australia & a Hip Hop Performance from Canada along with artist Yash Kapoor all come together at the Marwah Studio. The 12th edition of Delhi International Arts Festival will have about 1,000 artists from 20 countries perform in 92 events to be held at 20 venues across the city.
Some of the artists travelling to Delhi for the festival from abroad, also have an Indian connect, and are elated to come here to perform, Said Sandeep Marwah President Marwah Studios on the inaugural ceremony of the Delhi International Arts Festival at Marwah Studios, Noida.
On the occasion artist from different countries like Kathak Dancer Anu Sinha, Ms Yo Yo from China, Lary T Hill from Australia, Yash Kapoor from Canada present there for performance.Such platforms help dancers like us to create a harmonious balance between fusion and pure approaches, and also helps us to share the work of both ends of the world.
A painting exhibition of Ms. Gauri Sahni also inaugurated on the occasion.

Posted by tricitynews online at 04:53 No comments:

By Tricitynews
Chandigarh 04th December:- For the sake of the country's  security, the SSC Ex- servicemen, who were part of the war of 1965 and 1971, are now wandering for their rights. To get pension and medical benefits, they had meeting with Defense Minister of the country as well as with COAS. But even after fighting for so many years, they have not received anything. 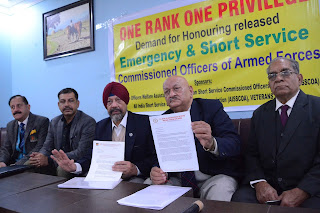 In a press conference organized at the Chandigarh Press Club, Captain Jaspal Singh and Captain RK Bharadwaj and other Ex Servicemen officer’s said that they were joined under the Short Service Commission in the Army. After serving 5 years in the Army, they came to know that they are not entitled to all pension and medical benefits. Rather they are  civilian. So they cannot get all these benefits. To get their rights, they met Chief of Army Staff and Defense Minister twice, but all in vain. Even they did not get any proper response from them. They are also planning to meet with the Prime Minister's office to get their benefits as soon as possible.
He further stated that there are quite a number of SSC ex servicemen who won Gallantry Award. Many of them even received “Param Vir Chakra, Veer Chakra, and Ashok Chakra” etc. Captain Jaspal Singh said that he has been badly hurt by fighting for the right of his benefits. He said that they are struggling very hard to get their benefits, but no one is bothering to implement the same.


Posted by tricitynews online at 04:45 No comments: 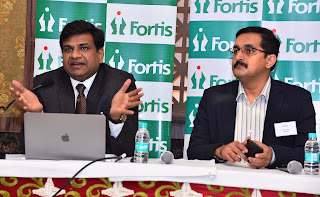 By Tricitynews
Patiala 04th December:- In a significant boon to the health sector in the region, Fortis hospital Mohali has introduced the facility of Robotic surgery for prostate cancer, elevating it to become a centre of excellence for Prostate cancer in the region. A team of Doctors led by Noted Urologist and Robotic Surgery specialist Dr Priyadarshi Ranjan, at Fortis Mohali successfully conducted the Robotic Surgery, which was the first of its kind in the region.
The surgery was earlier done by open method in which the patients required a 20 centimetres long incision below the navel extending down till the pubic region. Now the traditional surgery has been replaced by the world class da vinci Robotic surgery in which the entire surgery is completed by small 8 mm incisions, with excellent recovery. The entire procedure is almost painless, bloodless and the patient is usually discharged on day two after surgery. Robotic surgery for prostate cancer provides excellent cancer control, minimal blood loss, excellent continence, erectile function and minimal hospitalisation.
The patient Ajaib singh, a resident of Sangrur was delighted by the outcome of Robotic surgery. With this now Fortis Hospital Mohali has also become the first hospital in the private sector north of Delhi to offer the services of Robotic Surgery for prostate cancer. Prostate cancer is one of the commonest cancer in males after oral and lung cancer and is a leading cause of mortality among men above 50 years of age.
In today’s date prostate cancer is treatable in all stages with excellent cure rates, said Dr Ranjan. Elaborating about the symptoms Dr Ranjan said that early prostate cancer is mostly asymptomatic and almost all cases are detected only by active screening by a Urologist. As per recommendations, prostate cancer should be actively screened in all men over 40 years of age to be detected at an early stage, where treatment outcomes are excellent.

Posted by tricitynews online at 04:08 No comments: 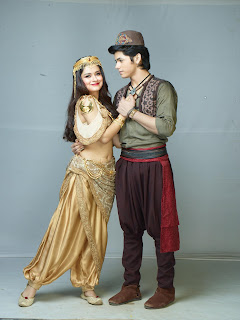 By Tricitynews
Chandigarh 04th December:- Sony SAB’s Aladdin: Naam Toh Suna Hoga keeps scaling to newer heights with captivating storyline and a stellar cast. Apart from the rave reviews from the viewers for the show, the on and off screen chemistry between all characters is at its crackling best. This fantasy show, starring the very talented actors Avneet Kaur as Yasmine and Siddharth Nigam as Aladdin, is now set to up the scale with a newer twists that is sure to keep viewers hooked on to their TV screens.
The current track of the show has got Aladdin and Genie (Raashul Tandon) working in the coal mine, in order to further their attempts of reaching the palace and clearing Abbu’s name. On the other hand, Zafar (Aamir Dalvi) tries scaring people away from working in the mine. However, witnessing Yasmin’s hard work and motivational speech, workers agree to continue working there. While Yasmin informs the king of her decision to change the security, Zafar fakes his resignation; which Yasmin declines and re-appoints him as Baghdad’s Wazir. Now, with a new promotion, Zafar is driven mad with power and is set to lay out a trap for everyone else.
Siddharth Nigam playing the role of Aladdin said that he thoroughly enjoy playing the role of Aladdin Not only is it a lot of fun to shoot magical sequences filled with action, but he is also learning a lot from the character. He is humbled by the love audiences have shown us and it inspires me to work even harder to keep them entertained.
Avneet Kaur essaying the role of Yasmin said that for many years, she have followed the story of Aladdin and Yasmin’s love and respect for her father has always stood out. And so, it’s a great experience to portray this beautiful character from the fantasy world. The entire cast and crew have bonded really well, and we end up having a lot of fun while shooting.
Raashul Tandon playing the role of Genie said that everyone loves Genie! Hence, for him, it is even more challenging to get into character and at the same time, do justice to it. Working with such talented actors alongside provides immense motivation and in turn makes the show come alive with the story.
Aamir Dalvi playing the role of Zafar said that playing a negative role is very challenging, as it has lots of layers to it. He is quite enjoying portraying the character of Zafar as he has many moods to showcase. It’s a fantastic experience being part of a show like Aladdin: Naam Toh Suna Hoga as every sequence brings with it, a new plot twist.

Posted by tricitynews online at 04:00 No comments: 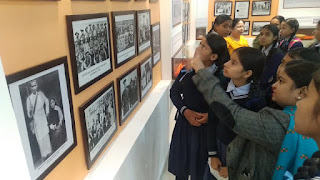 5th Workshop on Basic Epidemiology and Biostatistics Begins at PGIMER

Posted by tricitynews online at 03:42 No comments: