By Tricitynews Reporter
Chandigarh 21st December:- The north-west region’s most prestigious quality awards were presented at the 11thNorth-West QualTech Convention held at CII here today.
Instituted by PTU Nalanda School of TQM & Entrepreneurship, the first School of Excellence of IK Gujral Punjab Technical University had 26 finalist companies from among manufacturing as well as services sectors competing.
CEO of the School, Manish Trehan informed that the 26 finalist companies in the 11th NorthWest Qualtech Awards showcased the best practices and how they saved over Rs.21 crores by implementing Total Quality Management practices.
Senior Advisor of Eminence of American Society for Quality (ASQ) and former Deputy Director of Tata Steels, K.C. Mehra, gave away the awards at the function in the presence of Dinesh Dua, CEO & Director, Nectar LifeSciences.
Sona Koyo Steering Sysem, Dharuhera, Haryana, lifted the Vardhman Quality Navigator Award trophy for the Large manufacturing category, with Mondelez India Foods, Baddi, and Vardhman Textiles, Baddi, as first and second runnersup.
The Trident QualityPioneer Award for manufacturing units in medium categories, Gates India of Lalru, won the trophy, while the first runners up was Winsome Textile Industries.
In the Services Sector, the Quality Innovator Award trophy was won by Max Super Speciality Hospital, Saket; while Max Super Speciality Hospital, Okhla, and Chaitanya Hospital Chandigarh, were adjudged as the first and second runners up respectively.
In the small business categories, the Winsome Quality Pathfinder Award tropgy went to Baddi based Betts India, Farmparts of Ludhiana was the first runners up, and Mohali based Aqua System , was the second runners up.
K C Mehra, in his keynote address expressed his happiness at the growing stature of these Awards as reflected in the enthusiastic participation of companies in the competition. The vital and intense role that quality plays in achieving towards perfection cannot be overemphasized, he added.
As an advisor to ASQ South Asia, and Anindya Sarangi, Director Business Development for South Asia, informed that ASQ has entered into strategic alliance with PTU Nalanda to further enhance and strengthen the eco-system of total quality management in the region, and encourage individuals to go in for globally-recognised certification.
Anandiya informed that the ASQ shall also be setting up local chapter with the industry and community participation.
One of the pioneers in initiating the quality movement in the northern region, Padmashri Chandra Mohan, Chairman of the School’s Governing Council, said that India today needs global techno-entrepreneurs to raise the competitiveness of the Indian manufacturing sector.
Earlier in the afternoon a panel discussion was organized on “Towards Global Competitiveness to Make In India Roar” moderated y ASQ India and South Asia Director Anindya Sarangi, in which Regional Medical Director of Fortis Hospital Mohali, Dr Gurbir Singh; Sudhendhu Bali, Mentor of Entrepreneurship and Incubation Cell, PEC University of Technology, and Vijay Garg, Joint Managing Director of IOL Chemicals and Pharmaceuticals Ltd, participated and discussed the challenges and opportunities for the Indian businesses in the changing global scenario.
Posted by tricitynews online at 04:33 No comments: 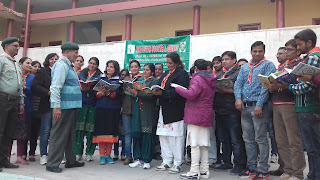 By Tricitynews Reporter
Chandigarh 21st December:- National Teachers Training Camp of Hindustan Scouts & Guides was inaugurated by National Secretary, Ravinder Talwar at DAV Senior Secondary School Sector 8, Chandigarh today.
Keeping the glory of nation intact, the National Flag was hoisted by the Chief Guest, Shri Ravinder Talwar. “ONE MUST LEARN TO DO ONE GOOD WORK IN A DAY”, said while addressing the Teachers. Everyone must imbibe good habits and discipline in their lives. Principal Vibha Ray and Sant Ram also spoke on this occasion.
National Training Commissioner, Maqbool Ahmad, appraised the participants regarding good values and stressed on the motto of the Scouts & Guide - “Serve Man to Reach God”. Other activities during the first day were - Group Introduction, Clap Introduction, Camp Rules, Prayer - Hindustan Scouts & Guides, Left Hand Shake, Knowledge of National Flag etc.

Posted by tricitynews online at 04:27 No comments: 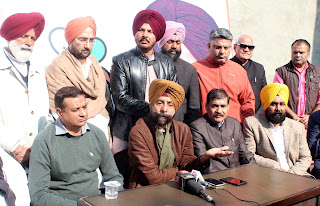 By Tricitynews Reporter
Chandigarh 21st December:- As part of the fast paced growth strategy of the TMC in Punjab, today Former MP & TMC State President Jagmeet Singh Brar inaugurated the 4th office of the TMC in the state in Jalandhar.
He addressed the press later and said that we will continue to open new office across the state on a very regular basis and I am proud to say the TMC is getting a groundswell of support on all levels of the political spectrum in Punjab.
Jashandeep Sandhu, Sector Incharge of Bassi Pathana, Amloh, Fatehgarh Saheb of the AAP also joined the press conference and expressed his complete support for a pre-poll alliance between the AAP and TMC. The event was also attended by some senior Doaba region AAP office bearers who did not wish to be named but was vocal in support of the alliance under discussion. Jagmeet Brar clarified "Please don't see this as an AAP rebellion or a breakaway - these young colleagues have shown their support for the alliance and proved that we are one family with one aim, Hamara Ek Nishana Hai, Ek Raasta Hai.
Jagmeet Singh Brar also flayed the Badal Govt for the manner in which Kolianwali was being allowed to terrorize and interfere in the AAP rally being held in the village and said that a  known drug dealer criminal is being allowed to interfere in a democratic event - this is not just shameful it is illegal and I urge the Election Commission to take note of this urgently.
He also ridiculed the much touted aviation sector announcements of the Badal Govt and said that yesterday he had said this about the Bhatinda airport and today he repeat this for the Adampur project people need jobs, they are committing suicide and facing drugs and gang wars - this is just propaganda not a solution.
When asked if he would be open to contesting from Lambi or Amritsar he said that he leave this to his leadership and if asked he will take on any challenge.

Posted by tricitynews online at 04:20 No comments: 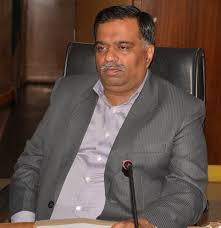 Posted by tricitynews online at 04:15 No comments: