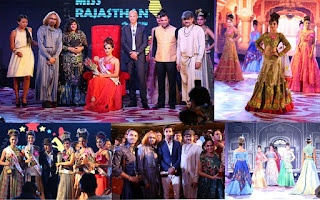 By Tricitynews Reporter
Chandigarh 26th August:- This was the most prestigious and sought after show dedicated to glamour and talent. A score of talent of contestants heated up the competition and raised the bar for women’s beauty, fashion and empowerment on the runway. Simran Sharma from Jaipur city won the coveted title of Miss Rajasthan 2017,  Aparna Jadon was first runner up, Mehak Rathod was selected  as second runner up , URVI Sharma became third runner up and Saayna Sharma was forth runner up. Gala event promised to offer a spectacle never seen before.  All contestants in avatar of beautiful and royal divas vied to win coveted title of MISS RAJASTHAN 2017 organized by Yogesh & Nimisha Mishra with Nareshant Sharma.
Super Model Tata Viva along with social activist Aabha Jha Choudhary was felicitated by eminent judges in the show for their exceptional work.
Celebrated designers Ajay Sinha and Buzy from Buzjay Fashion Studio along with Poornima GoyaL, beauty expert from Silverine Spa & Salon presented a spectacle of ebullient fashion and beauty extravaganza.  Designs based on the theme of Royal Chariatte, Elaborate ensembles, exquisite makeovers, stunning hair dos, magnificent set and riveting concepts of the show were dedicated to luxury and penned down a new chapter of royal grandeur in keeping with aesthetics of Indian traditions fashion and beauty. Designers Ajay Sinha and Buzy recreated the magic of high end fashion with royal couture and set the stage to celebrate the formidable repertoire of designs. Their creativity came alive on the ramp as all contestants walked the stage clad in specially curated ensembles by celebrated designers. Designers paid special attention to all the looks and captured true essence of royalties and elegance in tune with theme Royal Chariot.  Ajay Sinha & Buzy stated, " For Miss Rajasthan show, we have created themes that are sheer bliss reflecting epitome of style, grace and effortless royal aura.
Stunning makeovers for the show were created by makeover expert, Silverine Spa & Salon Poornima goyal. She stated that this is our third consecutive participation with Miss Rajasthan, Last year we created magic of  futuristic high couture and red carpet fashion, this year our makeovers delved into the royal world of beauty that  is elaborate yet elegant. We highlighted dreamy perceptions of beauty forward and independent women. Poornima Goyal informed that we created a powerful fashion and beauty statement, loaded with drama which pulled off a tremendous show.
Jury included eminent personalities from Royal families of Jaipur Mr Padamnaath Singh, Maharaja Narendra Singh ji with Jaishree periyaal, Arshad hussain, designer Nareshant Sharma, Ishreen vaadi and former squash and polo champion Dhruv Raj Singh. Gala evening also enthralled everyone with live performances of Actress Sanjana Sen and singer Bhanu Pratap Singh. Show choregraphy was done by Geeta Singh and Vinay.

Posted by tricitynews online at 05:38 No comments:

By Tricitynews Reporter
Chandigarh 26th August:- SPEAK India (Society for Promotion of Ethical & Affordable health Care)  has planned to present ‘Junk Food’ a  play to  fulfill its twin objectives of promoting healthy lifestyle and to curb unethical practices in healthcare, in collaboration with ICCR and Punjab Arts Council. According to Dr. R. Kumar President of the society, the play is scheduled for Tuesday 29thAugust at Randhawa Auditorium, Rose garden sector 16 at 6.30 PM. noted industrialist R.K.Garg will be the chief guest.
The play will in an interesting way make people aware of how a Diet consisting of junk foods like ice-creams, cakes, Burgers, noodles, coke, pasta, potato chips, and fried foods like Paranthas, Pakora’s leads to obesity and exposes to serious ailments like diabetes, heart ailments, hypertension, stroke, anemia and unproductive life in the long run. Most of these ailments can be prevented by simple health tips, observed Dr. Kumar.
The play also hopes to emphasize on the role of fruits and vegetables in meals, regular exercises, intake of plenty of water, adequate sleep, while shunning Junk foods and excess of tea intake.
It is noteworthy that SPEAK had successfully organized a painting competition among school students of Tri-city early this month on the same topic. It intends to involve the youth in its campaign in a big way through art and culture activities, in the coming months. 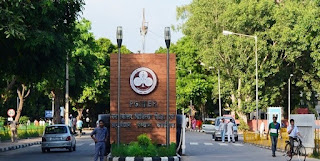 By Tricitynews Reporter
Chandigarh 26th August:- The widespread violence erupted soon after the chief of Dera Sacha Sauda Gurmeet Ram Rahim was convicted by the CBI court in Panchkula on 25th August, 2017. To cope up with the emergency situation, adequate anticipatory arrangements were made by the PGI, Chandigarh, under the guidance of Prof. Jagat Ram, Director, Amitabh Avasthi, IAS, Deputy Director and Prof. Anil K Gupta, Medical Superintendent. Prof. Sameer Aggarwal from the Orthopedics Department was Chief Nodal Officer, organizing and coordinating with other specialist and super-specialist doctors.
On 25th August, 2017, 70 patients were brought to the Advanced Trauma Centre of the PGI, Chandigarh, after 3.30 P.M. seven among them were declared brought dead and one patient brought to the hospital in critical condition died during hospitalization. Sixty two patients are under the treatment of team of orthopedicians, General Surgeons and Plastic Surgeons. Out of these, 32 patients were having orthopedic injuries, 7 were of plastic surgery, 14 patients had injury related to General Surgery, four were of Cardiothoracic Vascular Surgery and two were having neurosurgical injuries.  Majority of the patients were having multiple pellet injuries, Chest, Abdomen, Legs, joints, fractures or soft tissue injuries. After the treatment condition of most of the patients is satisfactory except for one patient who is admitted in the Intensive Care Unit and two patients having spine injury with paraplegia.  Half of the patients will be discharged today. All the patients have been managed by the medical and surgical treatment and were provided free medical/surgical treatment. 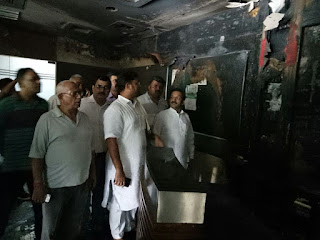