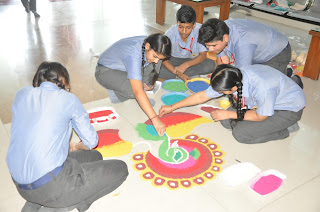 By Tricitynews Reporter
Chandigarh 21st October:- Brilliance World School, Sec 12, celebrated Diwali with an Inter-house Rangoli competition for secondary & senior secondary classes. In this competition, both boys & girls took part enthusiastically and the school wore a festive look. The 1st prize went to Himalaya House, the second prize was given to  Aravalli House & the third prize went to Nilgiri House & Vidhyanchayal House. A diya decoration competition was also conducted.
Students decorated the school beautifully under the guidance of Ms. Prajot , the fine arts teacher.
Niranjana Chatterjee, Principal, Brilliance World School said that we wanted to give a message of clean & green diwali without crackers. Rangolis are a great way to beautify one's house or premises and the children put in a lot of effort to make colorful rangolis.
Posted by tricitynews online at 04:52 No comments: 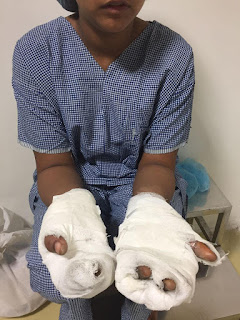 By Tricitynews Reporter
Chandigarh 21st October:- A 14 year old girl child, originally hailing from Muzaffar Nagar, (UP) suffered burns on both the hands while bursting the crackers by igniting them in her hands. She visited the OPD of the PGIMER. She was staying in Chandigarh with one of her relatives.
This dangerous action which should always be avoided has led to severe burns to both her hands which are being treated now by PGIMER.
Posted by tricitynews online at 04:42 No comments: 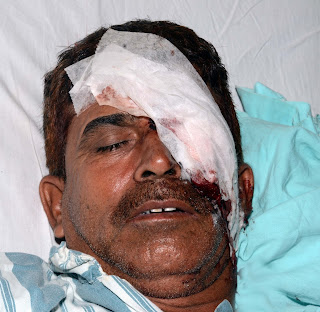 By Tricitynews Reporter
Chandigarh 21st October:- A total of 3 patients with fire cracker related injury presented to the emergency services of Advanced Eye Centre, PGIMER, Chandigarh. 16 patients were from the tricity area, while 21 were from the neighboring states of Punjab, Haryana, Uttar Pradesh and Himachal Pradesh. There were 29 males and 8 females. 19patients were <16 years of age and 5 were >40 years of age. The youngest patient presenting with ocular injury due to fire cracker was 7 years old. 11 patients were actually lighting the crackers when they got injured and 26 were bystanders. A total of 13 patients required surgical intervention to salvage the eye, 10 of which have undergone surgery at the time of preparation of this report.
Majority of those who required surgical intervention had severe injury with light perception or worse visual acuity and were from outside the tricity area. 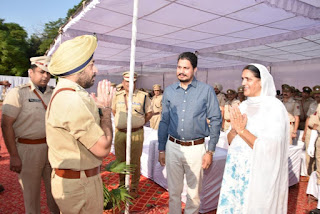 By Tricitynews Reporter
Chandigarh 21st October:- On the occasion of Commemoration a Commemoration Parade was organized at the Ground of Police Station, Sector-17 Chandigarh in memory of the martyred companions. Every year, 21st October is the day of remembrance of the martyred companions who laid down their lives during obligation of their duties. On this occasion, two-minute silence was held to salute the memory of Comrades who sacrificed their lives. Central Police Organizations and State Police celebrate this day in the form of Martyrdom Day.
Tajender Singh Luthra, Director General of Police, UT, Chandigarh along with other police officers paid homage to their departed comrades at the Martyrs Memorial Site. Last year from 1st September 2016 to August 2017 total 383 Police Officers and Police Personnel from paramilitary police forces and police organizations have set exemplary example before their colleagues by sacrificing their lives during duty. This year the number of officers and jawans who laid down their lives Andhra Pradesh (05), Arunachal Pradesh (02), Assam (01), Bihar (12), Chattisgarh (23), Delhi (13), Gujarat (02), J & K (42), Jharkhand (02), Karnataka (12), Madhya Pardesh (03), Maharastra (01), Manipur (03), Meghalaya (02), Orissa (09), Rajasthan (01), Tamil Nadu (02), Uttrakhand (07), Uttar Pradesh (76), West Bengal (16); BSF (54), CISF (13), CRPF (49), Civil Defence F.S. & H.C. (06), ITBP (11), NCB (01), NDRF (02), SSB (02), NIA (02), RPF (09) during duty.
The history of commemoration day traces back to October 21, 1959, when a police party of the Indian police force was deployed to defend national frontiers in the Ladakh region. The same was attacked by Chinese troops hidden by forming ambush in hills and 10 CRPF jawans were killed. Since then, this day is celebrated as Martyrdom Day at Central Police Organizations and Police Forces in remembrance of countless sacrifice of martyr companions.

Posted by tricitynews online at 04:30 No comments: 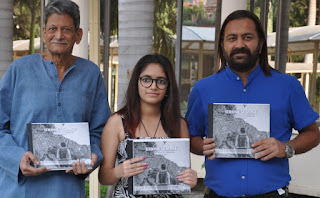 Photo By Parveen Kumar
By Tricitynews Reporter
Chandigarh 21st October:- ‘Idiosyncrasy’-A collection of poems by a 17 year old young budding poetess-Twesha Dikshit  was formally released by renowned author Kiran Nagarkar at Hotel Mountview here. Idiosyncrasy also means peculiar behavioral traits of individuals, & the unveiling of the book was well attended by the literati of the city.
The book also has some captivating photographs of Twesha's father-Mitul Dikshit an avid photographer & well known educationist of tricity, from his collection of photographs taken during his adventurous sojourns of Inca Ruins and Amazon Rain Forests. Twesha started writing stories at the very young age of 10 years and has continued to maintain a blog-www.magicofwordsweb.wordpress.com since the past two years. She is an avid traveler and has already travelled to 6 continents.
Twesha Dikshit   said that for enhancing my poetry skills she has done an online course from California Institute of Arts and studied modern and contemporary poets. She would like to thank her family for letting her pursue writing & she is elated as her first published work 'Idiosyncrasy' has been launched.
Twesha has a keen interest in Journalism and has done a 5 week online course ‘English for Journalism’ from University of Pennsylvania exploring print and digital media. She plans on studying Journalism and English at college. Her future aspirations include travelling and pursuing journalism. She finished her 10th grade from Welham Girls’ School, Dehradun and is currently finishing her high school from Strawberry Fields High School, Chandigarh.
Kiran Nagarkar, after launching the book of poems, said that in Twesha’s poems we witness a human consciousness finding its voice, hacking away at the internalized self-censorship to utter unutterable truths, to hold them up in the sunlight of expression, and to restore these truths to a wholesome and acceptable place. Twesha has shown abundant talent at a very young age he wish her all the best for her future endeavours.
It is noteworthy that Nagarkar is one of India's most significant post colonial writers known for critically acclaimed works like Seven Sixes Are Forty Three) (1974), Ravan and Eddie (1994), and the epic novel, Cuckold (1997) for which he was awarded the 2001 Sahitya Akademi Award in English by the Sahitya Akademi, India's National Academy of Letters.
In poem after poem, Twesha shows in 'Idiosyncrasy' that a human voice of any age speaks for all ages. The famous doctor in Killer of Dreams is at heart just a little boy whose stifled aspirations make him die a little every-day. The icy-hearted narrator in Inferno stands up to her lover-torturer and rejects the mantle of victim: ‘Don’t look so shocked/ I existed even before you came/ I am the puzzle that nobody can win…” And then again in Beguiled: “I’m not a damsel in distress/ But my very own mistress/ My hear is as cold as steel/ Deaf to any appeal/ Run, run as far as you can/ You are no better than a conman.”
Idiosyncrasy has a foreword by Altaf Tyrewala, who is the author of critically acclaimed books -No God in Sight, and Ministry of Hurt Sentiments. He is also the editor of crime fiction collection Mumbai Noir.
Madhav Kaushik ,Vice Chairman Chandigarh Sahitya Academy, who himself is a noted Poet said that Twesha's poems display a musicality, a wisdom well beyond her years, as well as that uniquely youthful lust for the pleasures and sorrows of the here and now. Congratulations to Twesha on penning these prodigious & deep in meaning poems.
'Idiosyncrasy' has great lines of poetry, which like early morning jogs, succeed because they take your breath away momentarily only to leave you rejuvenated and oxygenated and high. Let's welcome Twesha Dikshit a promising young poetess into our literary circles.

Posted by tricitynews online at 04:23 No comments: