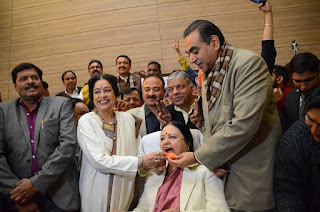 Posted by tricitynews online at 04:08 No comments:

By Tricitynews Reporter
Chandigarh 12th January:- On the second day of filing nomination for assembly elections of district SAS Nagar, one nomination has been received for constituency 052-Kharar. The nomination was submitted by BSP candidate Harbhajan Singh in-person at SDM office in front of Returning Officer Amninder Kaur Brar. However, no nomination received by any candidate for constituency 053- SAS Nagar & 112- Dera bassi.
Stating this district electoral officer cum deputy commissioner D.S. Mangat said that any participating candidate could file their nomination papers at prescribed counters in the office of returning officers till 18 January from 11 AM to 3 PM on any day.
D S Mangat said that nominations could not be filled on 14th and 15th January due to holidays. Scrutiny of nomination papers will be conducted on 19 January and till 21 January any candidate could withdraw his/her nomination. Polling will be held on 4thFeb Saturday from 8 AM to 5 PM. Finally counting of votes will be done on 11th March 2017.
Posted by tricitynews online at 03:40 No comments: 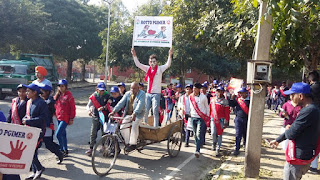 By Tricitynews Reporter
Chandigarh 12th January:- Swami Vivekanand preached the philosophy of self less service to humanity. As an apt tribute to the great spiritual leader on National Youth Day,  Regional Organ & Tissue Transplant Organization (ROTTO) PGI organized awareness and infotainment sessions in collaboration with Govt Model Senior Secondary School, Sector 20, University Institute of Legal Studies (UILS), Panjab University and Rajiv Gandhi National Institute of Youth Development, Chandigarh here today.
The infotainment session at Govt Senior Secondary School, Sector 20-D, witnessed an enthusiastic response. Starting with an awareness talk on the altruistic cause of Organ Donation by Ms Nilakshi, Transplant Coordinator, ROTTO PGI, the session comprised Face Painting competition wherein the students displayed stupendous imagination and creativity as well as sensitivity towards the cause at its best.
The event culminated with a rally which was flagged off by the Principal Meena Kapur. Sharing her views on the initiative, Meena Kapur said that encouraging participation from the students to inculcate awareness among family members to promote the cause is really thoughtful. We all must join hands and synergies so that precious lives are not lost for the want of organs.
Over 200 students and volunteers pledging their support for this humanitarian  endeavor and carrying placards with motivational messages, participated in the rally which was coordinated by Parminder Kaur, NSS Coordinator. The enthusiasm of the students at the rally was really contagious.
In the second event organized to mark the National Youth Day at Institute of Legal Studies, Panjab University, over 50 students participated in the awareness talk on the subject of Organ Donation. Complimenting ROTTO for taking forward the mandate by tapping multiple windows of opportunities, Pawan Kumar, NSS Coordinator said that Swami Vivekanand teaches us love and service to humanity and there cannot be a better service than saving someone’s life. We support this noble initiative and would urge one and all in the University to join hands and be a donor.
Commemorating the National Youth Day, ROTTO organised another Awareness cum Sensitisation Session in collaboration with Rajiv Gandhi National Institute for Youth Development, Sector 12, Chandigarh. Addressing the participants numbering over 150 at the Institute, Ms Simmi B Sumbria, Transplant Coordinator at ROTTO PGI highlighted that Organ Donation literally means a new lease of life for someone and in a way, imbibing the values given by Swami Vivekanand in a true sense.
Stanzin Dawe, Regional Director, Rajiv Gandhi National Institute of Youth Development mentioned that the intent behind organizing this session was to build awareness and a positive attitude towards this noble cause. We would motivate more people to come forward, and register their wish.
The camp concluded with 32 participants registering their pledge for organ donation at the spot and over 50 forms were distributed to those showcasing their interest to register their wish for organ donation.

Posted by tricitynews online at 03:35 No comments: 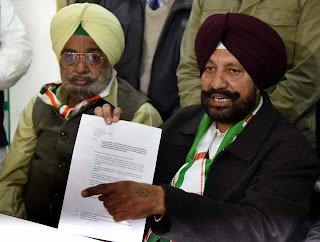 By Tricitynews Reporter
Chandigarh 12th January:- Taking a serious note of using government office for campaigning purposes in support of SAD-BJP candidate from Mohali Assembly seat the Congress candidate, Balbir Sidhu has today complained to the Chief Election Commissioner to take suitable action against the officer.
Addressing a press conference at Congress district party office in phase 1 here today, Balbir Sidhu accused Manvesh Singh Sidhu, Chief Administrator, PUDA for campaigning and pressurizing the staff & others to support Capt TPS Sidhu the Akali-BJP candidate.
We have got many complainants in past few days and decided to bring the matter in front of Dr. Nasim Zaidi the Chief Election Commissioner of India. We seek immediate transfer of Manvesh Singh Sidhu to some other state in the interest of free and fair election in Punjab.  It is a wrongful act and against rules for a government public servant to facilitate the poll campaign of a political party candidate.
In a complaint letter,  Balbir Sidhu said that Manvesh Sidhu is a very close relative to Capt TPS Sidhu who was also of IAS cadre and contesting election after resigning the post of Secretary, Marketing Board, Punjab.
Manvesh Singh Sidhu using his office as PUDA has direct public dealing. We have certain proofs about Manvesh Singh Sidhu using  his office in favour of  Captain TPS Sidhu, asserted Balbir Sidhu .
Interestingly , Manvesh Singh Sidhu has been on the same seat for the last  5 years due to the blessings of the political high-ups, who are also very close  to him, he pointed out.
The copy of complaint letter has also been marked to Punjab State Election Commissioner, Chandigarh, District Electoral Officer /Deputy Commissioner, Mohali.
Meanwhile terming SAD-BJP candidate as an outsider, Balbir Sidhu said that Mohali people cannot trust him as he is not even aware of their problems. He is now promising everything in this world to Mohali people. Balbir Sidhu said that why didn’t he do all this when he was DC of Mohali. He is only making baseless and fake promises to ensure his win.
We have passed our half of life while serving Mohali and vow to serve it till our last breadth. These means of misusing power and fleecing people by wrong means will not work here, maintained Balbir Sidhu.

Posted by tricitynews online at 03:29 No comments: