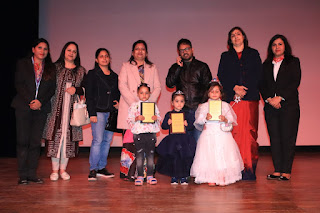 
Director Principal Ms. Aruna Bhardwaj thanked all the schools for participating in the competition with true spirit of competition and congratulated the winners and participants.
The Chairman Ashwini Garg, President Ashok Garg and Vishal Garg distributed trophies to the winners. Vishal emphasized on the overall developed of children and said that stage performances boost child’s confidence and prepare him for the future world.

Posted by tricitynews online at 05:29 No comments:

By Tricitynews
Chandigarh 11th December:- Nissan India today announced a price hike of up to 5% across its models. The revised prices will be applicable across all available models for Nissan and Datsun, effective January 2020.
Rakesh Srivastava, Managing Director, Nissan Motor India Pvt Ltd, said that Nissan is committed to offer innovative and exciting products under the Nissan and Datsun brand with the best value proposition to its customers in India. In the current challenging market conditions, we are constrained to increase the price of all Nissan and Datsun models due to increased costs. The proposed price increase will be effective from January 2020.
Nissan India recently rolled out ‘Red Weekends’ to offer a host of lucrative offers on Nissan and Datsun models. During the ‘Red Weekends’ on Nissan KICKS customers can avail attractive cash discounts up to Rs 40,000, exchange bonus up to Rs 40,000 and corporate discounts up to Rs 10,000.
Nissan KICKS - The Intelligent SUV is available in four diesel variants, XE, XL, XV and XV Premium, ranging from INR 9.89 lakh to INR 13.69 lakh. The KICKS is also available in two dynamic petrol variants – XL at INR 9.55 lakh and the XV at INR 10.95 lakh.
Enhancing the convenience quotient, the CVT version of Datsun GO and GO+ was introduced recently at an attractive introductory price of INR 5.94 Lakh and INR 6.58 Lakh respectively. These are the first models offer the most affordable automatic offering in their respective segments.
Posted by tricitynews online at 05:23 No comments: 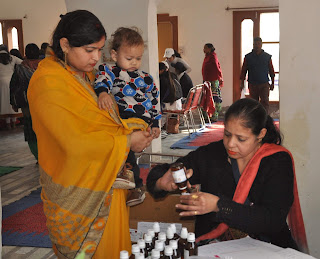 By Tricitynews
Chandigarh 11th December:- A free medical camp at Kajheri was held to mark the start of the 169th Birth Anniversary celebrations of the founder of Dev Samaj, Bhagwan Dev Atma. The camp organized by the NSS unit of Dev Samaj College of Education, Sector 36-B, Chandigarh in collaboration with GMSH Sector-16, Chandigarh was inaugurated by Hardeep Singh, Sr. Deputy Mayor, Chandigarh, in the august presence of Nirmal Singh Dhillon, Secretary, Dev Samaj and Dr Agnese Dhillon, Principal, Dev Samaj College of Education. A team of 8 doctors, along with the NSS volunteers, made sure that the camp was hugely successful as more than 300 people benefitted from the camp. It included TB detection, eye checkup, orthopedic checkup, AYUSH, family counseling and de-addiction.
In keeping with the altruistic philosophy of Bhagwan Dev Atma, the four day event celebration from Dec 11th to 14th 2019 at Dev Samaj Bhavan, Sector 36 B, Chandigarh, will have various activities like discourses on social ethics and moral culture which will happen daily. A blood donation camp and a drama, highlighting spiritual and moral values, by the students will be held on December 13, and on the same day a band orchestra display by the students of Dev Samaj schools will be organised.
The inaugural session held at Dev Samaj Bhavan saw Jagdish Chandra Bharadwaj, member, Dev Samaj Council, welcoming the delegates and participants from Punjab, Haryana, Maharashtra, Himachal Pradesh, Jammu and Kashmir, Uttar Pradesh, Delhi and Chandigarh. The session witnessed students from the Dev Samaj College for Women, Sector 45-B, Chandigarh, Dev Samaj College for Women, Ambala, Dev Samaj College for Women, Ferozepur, Dev Samaj College of Education, Ferozepur and Dev Samaj College of Education, Chandigarh, presenting an array of devotional bhajans glorifying the life and altruistic philosophy of Bhagwan Dev Atma.
Dev Samaj Bhawan wears a festive look, and is all set for the activities of the next three days which are especially aimed at inculcating social, ethical and moral values among students. The students have enthusiastically prepared for the event and look forward to the coming days’ events. The event will be attended by around 2000 members of Dev Samaj and students of 21 Dev Samaj Institutions from all over the country.
Posted by tricitynews online at 05:18 No comments: 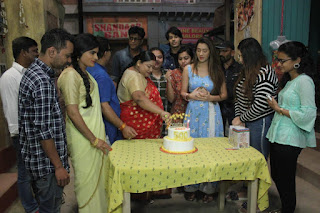 By Tricitynews
Chandigarh 11th December:- Staying true to its commitment to spread happiness and laughter, Sony SAB’s Jijaji Chhat Per Hain has continued to win the hearts of its viewers and has successfully touched the magnificent mark of 500 episodes. This quirky romantic comedy has gained immense recognition since its inception for bringing a mischievous yet sweet love story of Elaichi and Pancham, the two central stars of the show. Marking this joyous occasion, the entire team hosted a unique celebration where Elaichi played by Hiba Nawab was seen serving hot elaichi tea and complementing her was Pancham aka Nikhil Khurana, serving pakodas to the media.
Jijaji Chhat Per Hain revolves around sabki favorite Elaichi played by Hiba Nawab and her love interest–the supremely talented Nikhil Khurana, playing the role of sidha sadha Pancham. The show also boasts stars such as the father – daughter duo, Naveen Bawa, Inspector Pinky and Rashi Bawa, the selfie girl Sunita, along with Anup Upadhayay amongst others. This journey of 500 episodes has certainly lived up to the saying: where there is love, there is a much crazier way to get approval from your parents. The character Elaichi, a street-smart, unabashed girl from Chandni Chowk, has entertained the viewers with her clever pranks and totally crazy ideas to have her father, Murari (Anup Upadhyay), approve of her love interest, Pancham. Elaichi’s famous ‘tante’ and her sneaky ways of hiding her love affair from her principled and controlling father while ‘almost’ living under the same roof as Pancham, has packed with show with much excitement and laughter, to the delight of its loyal viewers.
Delighted at the competition of 500 episodes, Hiba Nawab, aka mischievous Elaichi said that reaching the 500 episode milestone is an extremely proud moment for all of us, especially considering all the hard work and dedication with which every person on the set has worked with. The success of the show belongs to the brilliant work of the entire cast and crew who have made this possible by working extremely hard to make a show which is entertaining for the viewers. It makes us happy to be able to celebrate this day with the media and our lovely audience. Elaichi will continue to spread laughter with her tante.
Expressing his happiness, Nikhil Khurana, who plays Pancham said that we are extremely grateful to our lovely audience who have always been supportive and have appreciated our work. The journey so far would have been impossible without their support and love. I am delighted to be associated with Jijaji Chhat Per Hain and spreading laughter and joy in our viewers’ lives.
On reaching this remarkable milestone, Anup Upadhyay, who plays Murari said that he is grateful for all the love that our fans and viewers have showered us with and reaching the mark of 500 episodes shows that our hard work is being appreciated. He has enjoyed working on this show since the inception and he look forward to bring happiness into people’s lives. He wants to take this moment to thank everyone for the support and we would continue to spread laughter through our show, Jijaji Chhat Per Hain.
Sony SAB’s Jijaji Chhat Per Hain features of some of the finest artists who have garnered immense love from the fans who have been dedicatedly tuning in to catch all the madness. Continue showing your love and keep watching your favorite characters embark on exciting journeys only on Sony SAB’s Jijaji Chhat Per Hain every Monday-Friday at 10 PM.
Posted by tricitynews online at 05:13 No comments: 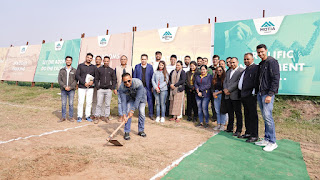 By Tricitynews
Chandigarh 11th December:- Motia Group, one of the leading real estate developers in Tricity performed bhoomi pujan today of its recently launched commercial project Motia Guildford square located at PR7 Airport road in Zirakpur. Spread across an area of 3.75 acres, the prodigious project will offer spaces of varied sizes for showrooms, office spaces, retail along with rooftop dining and was launched by the group on 28th November enters its first phase of construction today and will be ready for fit outs within two years.
The puja ceremony was performed by the directors of Motia group including L. C Mittal, Pawan Bansal, H R Mittal & Meshi Mittal along with other company officials and employees of the group.
While talking at the ceremony L. C Mittal, Director of Motia Group said that we at Motia Group always focus on timely delivery of projects and customer’s satisfaction. We are very excited to start the construction of Motia Guildford square which is one of our esteemed projects.
He further shared that we received the RERA number for this project last month and within 15 days we announced its launch and in a span of another 10 days the construction process has also started which shows are dedication towards delivering as per our promises.
Posted by tricitynews online at 05:07 No comments: