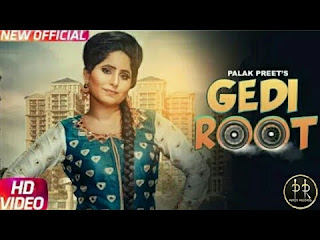 By Tricitynews Reporter
Chandigarh 03rd November:- Upcoming singer Palak Preet’s solo Punjabi track “Gerry Route” released by Speed Records at Hotel Le Crown ,Chandigarh today. On this occasion lyrics writer Pawan chotiyan, Gagan-Gags studio, Sonu Speed Records, Saby Sanjh Folk Entertainment, Video director R.Swami and dress designer Hina Bhullar were also present.
While interacting with media persons Singer Palak Preet stated that she hails from Mahendragarh, Haryana but now settled in Rajasthan. After death of her Father their family shifted to JhunJhunu Rajasthan. She developed interest in singing from his childhood. She participated so many cultural programmes during school days. Her Uncle inspired him to enter in Music field.
After that she met famous lyrics writer Pawan chotiyan through her relative Sunil Pehalwan and Gurdial Singh. He advised to do regular practise to learn basics of Music. After that she learnt intricacies of Music from Baldev Kakri of Mohali.
Now Palak Preet’s debut solo track Gerri Route is released by Speed Records. This song is written by Ghaint Sardar fame Pawan Chotiyan .Music of the track is scored by Gags studio.
Palak Preet is thankful to her father late Ram Kumar and mother Bimla Devi, who inspired and blessed him,. She is also impressed by female singer Sudesh Kumari.According to lyrics writer Pawan chotiyan, this song is already on air on PTC chakde, 9x Tashan ,Pitara ,TimeTV ,Punjabi Hits,MH1 and foreign channels Cine voice and E9 etc.
Posted by tricitynews online at 05:03 No comments: 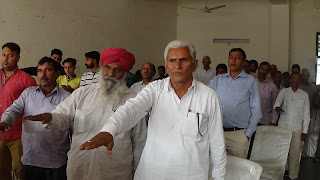 Posted by tricitynews online at 04:46 No comments: 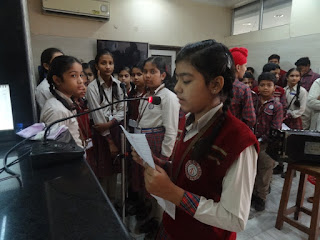 By Tricitynews Reporter
Chandigarh 03rd November:- Students of DAV Public school, Panchkula paid a rich tribute to Guru Nanak Dev Ji, the founder of Sikhism in the special assembly held to mark Gurupurab.
Principal, Dr. Pathak congratulated all on the occasion and motivated the students to follow the teachings of Sikh religion in letter as well as in spirit.
Led by the teachers, the school coir recited prayers in the glory of Guru Nanak Ji. Students of primary sections also narrated motivational real life incidents from the Guru’s life.
Posted by tricitynews online at 04:42 No comments: 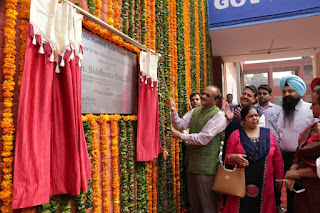 By Tricitynews Reporter
Chandigarh 03rd November:- A 70 kWp Rooftop Solar Power Plant was inaugurated today at Government Model Senior Secondary School, Sector 38 (West), Chandigarh by Siddhanta Das, IFS, Director General of Forests & Special Secretary, Ministry of Environment, Forests & Climate Change, Govt. of India.
While interacting during the event Siddhanta Das appreciated the efforts taken by UT Administration in developing Chandigarh as a Model Solar City. He appreciated the lead taken by Chandigarh in installing Solar Rooftop Plants on Govt. buildings but desired that in future more emphasis shall be given to promote its use by Private individual as well on their rooftop. After that the Chief Guest took a round of the school and inspected the Herbal Garden & Science Park in the school campus and also the appreciated greenery maintained school management in collaboration with Forest department.
Santosh Kumar, IFS, CCF & Director (Science & Technology  & Renewable Energy), UT, Chandigarh informed the gathering  that 70 kWp Rooftop SPV Power Plant has been installed by CREST (Chandigarh Renewable Energy, Science & Technology Promotion Society) with 30% CFA from Ministry of New & Renewable Energy, Govt. of India. The total cost of the Project is Rs.68.26 Lac which includes operation & maintenance charge for 10 years. M/s C & S Electric Ltd., New Delhi is the contracting firm who has installed this Solar Power Plant. The Plant shall be able to generate 91,000 kWh (units) per year. He further informed that this Plant is able to generate 0.091 MU of Solar Energy per year, which is equivalent to reduction  of 62.79 metric ton of CO2 and in turn equivalent to planting of 6806 trees per year, and hence a remarkable initiative under Climate Change Action Plan.
The function was also attended by Sh. C.D. Singh, IFS, Additional Principal Chief Conservator of Forests, Northern Regional office of MOEF, GOI, T.C. Nautiyal, IFS, Conservator of Forests, and other senior officials of  Chandigarh Administration.
After that Chief Guest visited Sukhna Wildlife Sanctuary and Botanical Garden, Sarangpur and appreciated the measures taken by Forest Department. He also visited Nagar Van behind Sukhna Lake which is being created under ‘Nagar Van Yojana’ of Ministry of Environment, Forests & Climate Change and took round of measures taken by Forest department in developing Nagar Van behind Sukhna Lake and appreciated the efforts of the Department of Forests, UT Chandigarh specially the cleaning/improvement of sewage water coming from Kansal in forest area by creating a Oxidation Pond and other natural measures.
Posted by tricitynews online at 04:27 No comments:

All PGI OPDs Closed on November 04 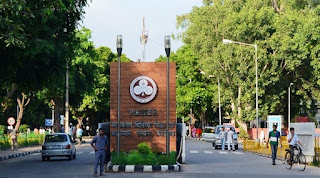 By Tricitynews Reporter
Chandigarh 03rd November:- All OPDs in PGI shall remain closed on 4th November , 2017  on account of Guru Nanak's Birthday, a gazetted holiday. Emergency services will function as usual.
Posted by tricitynews online at 04:20 No comments: 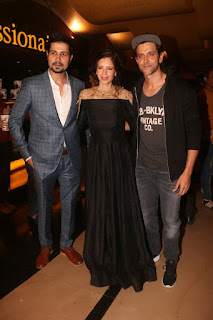 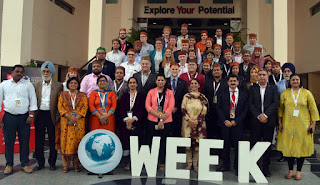 By Tricitynews Reporter
Chandigarh 03rd November:- Chitkara University has been continuously hosting annual block weeks for students where eminent professors are invited from across the world to teach predetermined short module courses. This globally acclaimed event is a footprint in the genre of internationalization for students as well as faculty members. It offers an excellent opportunity for the participating Delegates to get acquainted with the rich culture & diversity of Incredible India.
Global Week at Chitkara University is a strategic and splendid initiative of engaging aspiring students to acquaint themselves with advanced technologies thereby empowering themselves to become better engineers. The Global Week started on a very high note on October 30 and culminated today.
The main objective of this week is to provide a global environment to keep Chitkara University students informed about the dynamics of International education and to raise their global awareness.  All the students cannot go overseas for studies considering higher costs involved, so we bring International faculty to Chitkara University to give them a flavor of Internationalization. Our students experienced stimulating interactive sessions with visiting Professors from its partner Universities from around the World. They also gained competence towards becoming global learners as they witnessed unprecedented pedagogical styles during the five days of their participation in the programme.
Eminent and globally renowned professors from United Kingdom, Philippines, Mexico, Bangladesh and Malaysia visited the campus and taught students through different modules of about 20 hours each.  All the courses taught by the International Faculty are considered not only useful but also in demand by the prospective placement companies. This programme was focused to improve the students’ individual performances and academic achievements to enable them to be globally accepted and recognized with outcomes that match their aspirations and with their ambitions in a globally competitive environment.
With this Global Week another success story was scribed on the sands of time by Chitkara University under the stewardship of Prof. Sangeet Jaura, Associate Vice President, Office of International Affairs.
Posted by tricitynews online at 04:08 No comments: 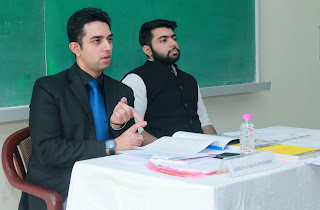 By Tricitynews Reporter
Chandigarh 03rd November:- University Institute of Legal Studies, Panjab University, Chandigarh is conducting ‘Intra Moot Court Competition, 2017’ from 2-4 November, 2017. A moot court is a simulation of real court like situation where law students are made to debate and persuade their side of the case, by pleading, and also drafting and submitting legal documents, judgments and reports.
On the day 2 of the competition, the preliminary rounds for both, group 1 and group 2, were conducted. The group 1 had 94 teams, due to which this group was divided into two slots for conducting the preliminary rounds, whereas group 2 had 27 teams.
The teams faced their opponents with a great vigour today, debating, persuading and manipulating the case in their favour. The fear in Intra Moot Court Competitions, is not of the opponents, it’s usually of judges as they have a tendency to grill, ask legally technical questions about the law, its procedure, its case laws, official documents and relevant reports.
The Top 8 teams have entered the finals for the competition to be held November 4, 2017.    It takes months of preparation and drafting to enter the final round of competition.

Posted by tricitynews online at 04:04 No comments: