Peace Walk in the Himalayas to Strengthen Indo-Thai Ties 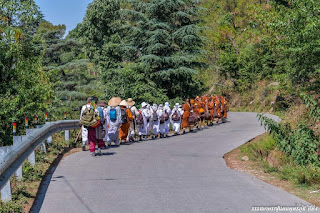 By Tricitynews
Chandigarh 15th June:- The pad yatra of 200 Thai monks and nuns, which began on 25th May from Dharamshala, will conclude at Leh on 26th June. Purpose of this 4th annual pad yatra is to spread the message of world peace and protection of Himalayan environment. The peace walk has already covered more than half way walking through the Manali, Rohtang Pass, Sarchu route. The walk is expected to enhance the India and Thailand relations.
Ven. Bhikkhu Sanghasena, President, Mahabodhi International Meditation Centre (MIMC) Leh (Ladakh) said that we wholeheartedly welcome each and everyone for the 4th Pad Yatra for ‘World Peace and 3-Day International Conference on World Peace, 150th Birth Anniversary of Mahatma Gandhi and Preservation of the Cultural Heritage of the Himalayas’. The conference will be on June 26-28.
Narviay Yadav, General Secretary, Save the Himalayas Foundation (SHF) Chandigarh Chapter, said that people from India may join the Peace Walk in the last leg of the yatra at Leh. SHF is an initiative to preserve the true grace of Himalayas and protect the eco system.  The SHF was founded by Ven Sanghasena in 2016 to restore the lost grace and grandeur of the Himalayan region and to protect the land, nature, cultures and values that form this glorious part of Earth.
The pad yatra, a walking pilgrimage, began from Bodh Gaya and via Dharamshala, it entered the Ladakh region, where it will conclude at MIMC Leh. The yatras conducted so far have played a key role in enhancing the diplomatic and religious ties between Thailand and India and this year as the number of participants is higher, it will further lead to mutual prosperity, happiness and triumph for both the nations, which have always played a vital role in promoting peace and harmony in the region. For more information, one can check the website: www.monkspeacewalk.com.

Posted by tricitynews online at 06:40 No comments: 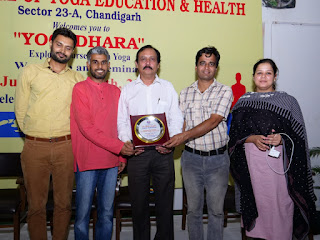 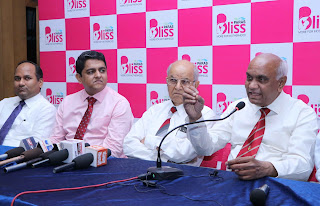 By Tricitynews
Panchkula 15th June:- To Create awareness on “Status of Neonatal Health Services in India & Haryana’ a team of Doctors from Paras Bliss Hospital, Panchkula addressed the media persons today. Present on the occasion were Dr O N Bhakoo Director Paediatrics & Neonatology, Dr K L N Rao-Director Paediatric Surgery and Dr Saurabh Goel–Senior Consultant Neonatology from Paras Bliss Hospital Panchkula.
Speaking on the occasion Dr O N Bhakoo said that of the 6.6 million under-five child deaths that occur globally every year, about 44 percent occur in the neonatal period (the first 28 days of life); this proportion is even higher in India– around 54 percent.”India contributes to one-fifth of global live births and more than a quarter of neonatal deaths. About 0.76 million neonates died every year in India. Also 70 % of infant deaths in India occur in first 04 weeks of Birth.
Addressing the media persons Dr Sorabh Goel said India has made considerable progress over the last two decades in the area of maternal and child health, through innovative and comprehensive health packages that covers the spectrum of Reproductive Child Health (RCH). New-borns however have missed out on the attention. The three major causes of neonatal deaths are complications of pre term birth, neonatal infections, and delivery related complications like birth asphyxia; together, they contribute to nearly 90% of total neonatal deaths. Neonatal mortality rate in Haryana are at around 28 deaths per 1000 birth, which is at par with backward stats like Jharkhand & Bihar and much higher than the lowest in the country.
Speaking on the occasion Dr K L N Rao said Oesophageal atresia, Anorectal Malformations, Intestinal Obstructions are common emergency surgical conditions and Inguinal Hernia, Pyloric stenosis and abdominal mass are semi emergency conditions in Newborns. All types of Neonatal and Paediatric surgeries are routinely done at Paras Bliss. In order to increase awareness and knowledge about latest in Neonatal Health, Paras Bliss Hospital is offering Regular Continues Medical Education Program for Doctors; interaction with Doctors in peripheral towns through Telemedicine; short term &long-term ICU training Programs for Nurses & Paramedical staff and State of art Ambulance services with Ventilators in adjoining districts of Panchkula. Neonates from far adjoining cities palaces like Yamunanagar, Karnal, Patiala, Rajpura, Kurukshetra, Shimla, Solan, Nalagarh are being shifted on regular basis to Paras Bliss in Ventilated ambulance.

Posted by tricitynews online at 06:25 No comments: 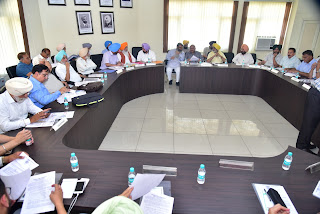 By Tricitynews
Chandigarh 15th June:- The President of the Punjab Olympic Association (POA) Sukhdev Singh Dhindsa today voluntarily resigned from his office after which the Vice President Brahm Mohindra was nominated as the Working President till the elections to the association are held.
In the Executive Meeting and Annual General House of the POA here today at the Punjab Olympic Bhawan, the services of S S Dhindsa as President for 41 years were applauded and it was unanimously decided to make him the Life President of POA in order to enable him to keep guiding the association. The meeting also saw congratulations pouring in for S S  Dhindsa for being bestowed with the Padma Bhushan and the award was applauded as a matter of honour for the association. It was further decided to felicitate Sukdev Singh Dhindsa in a grand function by all the sports associations and the players in recognition of his exceptional services rendered.
The meeting saw the unanimous passing of the proposal to nominate the Vice President of the association and Local Government Minister, Punjab, Brahm Mohindra as the Working President. The proposal afterwards also got the green light from the Annual General House. During the meeting, the decision was also arrived at to form a committee under the leadership of Brahm Mohindra which would coordinate with the Punjab Government concerning matters related to the association. On the occasion, Brahm Mohindra and Cabinet Minister Bharat Bhushan Ashu announced grants to the POA to the tune of Rs. 10 lakh each from their discretionary quotas which was greatly appreciated by all the members.
Earlier, the Secretary General of the POA Raja K.S. Sidhu while conducting the proceedings presented the report detailing the various works undertaken during the previous period. He disclosed that under the stewardship of Sukhdev Singh Dhindsa, a sprawling Punjab Olympic Association bhawan came up at Mohali. The efforts done by the Senior Vice President of the POA Rajdeep Singh Gill with regard to constructing a Hall of Fame within the bhawan were also greatly appreciated. The Hall of Fame depicts photographs plus achievements of the international level players from Punjab.
It was also decided in the meeting that the convention hall in the bhawan be christened as 'Sukhdev Singh Dhindsa Convention Hall'. In the aftermath of the meeting, all the office bearers visited the Hall of Fame at the ground floor. Earlier, at the start of the meeting, all the office bearers observed 2 minutes of silence in the memory of the Treasurer of the association P. S. Virk who passed away in 2015.
Among other office bearers of the POA present on the occasion included Sikander Singh Maluka, Parminder Singh Dhindsa, Padam Shri Kartar Singh, N. S. Kalsi, K. S. Kang, Tejinder Pal Singh Sidhu, Teja Singh Dhaliwal, Rajinder Kalsi, Prabhjit Singh, Karambir Singh, Gurbir Sandhu, Harcharan Singh Bhullar, P. R. Sondhi, Arjuna Awardee Tara Singh, Arjuna Awardee Jaipal Singh, and Deputy Director, Sports Department, Punjab, Kartar Singh Sehambi and Media Advisor of POA Navdeep Singh Gill.

Posted by tricitynews online at 06:10 No comments: