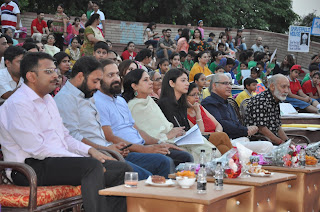 By Tricitynews Reporter
Chandigarh 27th May:- Dikshant International & Global Schools’ first major event of the new academic session, the Inter House Drama , Music and Folk Dance Competition was organized successfully at Yavanika Open Air Theatre. The Chief Guests were Sanjeev Kumar Bajaj , Circle Head, PNB and Amar Kaushik , a noted director whose short film ‘Aaba’ has recently won several prestigious national and international awards .The film won the best short fiction film at the 64th National Film Awards, Best Screenplay at the 7th Dada Saheb Phalke Film Festival and ‘Best short film’ at prestigious international film festivals including New York Indian Film Festival, Berlinale, IIFLA,LA and Aspen Shortfest. ‘Aaba’ was screened at the venue for the first time in India. The film has been produced by the Chairman of Dikshant Group of Schools, Mitul Dikshit.
Meanwhile the Dance & Drama competition was judged by eminent theatre actor Parvesh Sethi and senior journalist  Shayeda Bano. Students of Dikshant International School (DIS) displayed their talent in an intense competition between the four houses. The singing competition comprised renditions of iconic songs by artists ranging from John Denver to Cliff Richard. The plays enacted were The Dear Departed by Stanley Houghton, Heavenly Express by Sharon Kay Chatwell, Debit and Credit by August Strindberg, and The Model Millionaire by Oscar Wilde. The folk dances reflected the rich legacy of culture across India. Manipuri, Kashmiri, South Indian and Lavani dance performances were imbued with grace. Interspersed in between were; heart winning performances by students of Dikshant Global School (DGS).
Sanjeev Kumar Bajaj addressed the audience at the end and appreciated the students’ effort in putting up the show; Amar Kaushik said that it was a pleasure to behold such spectacular performances.

Posted by tricitynews online at 23:21 No comments: 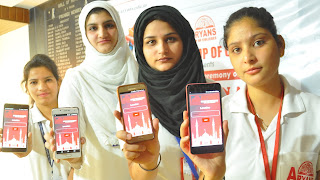 By Tricitynews Reporter
Chandigarh 27th May:- Once again the JK students of Aryans Group of Colleges, Chandigarh have come up with a new Innovative Idea in the interest of Muslim community of JK.
Aryans JK students developed Ramadhan App. Developed by a group of four JK girls of Computer science branch of Aryans College of Engineering, an android based app of 3.0 version christened as “Ramadhan App developed by Aryans Group of Colleges, Chandigarh” would now help to solve the problem of Muslim community during Ramadhan for their fasting. The app featured an automatic alarm which would buzz in the morning at Sehar time to awake them and in evening at the Iftar time to remind them for their meals. The app is available on Google Play Store.
B. Tech students Mehwish Rashid & Bisma Parveen who hail from Srinagar while Pooja Safaya and Mansi Salaria who hail from Jammu have set a true example of Religious Beliefs, universal brotherhood and respect for the religion of each other by developing this app which would help the entire community for time Management.
Dr. Anshu Kataria, Chairman, Aryans Group said that Aryans has always motivated its students for the innovations and work on live projects which could bring a revolution in them and the society. He said that Kashmiri students possess the instinct to work in this direction and hence they have always been supported for their ideas.
Mehwish Rashid & Bisma Parveen while interacting with the media said that as the computer science students we have tried to implement our knowledge to solve the problem of those Muslim people who find tough to match the variations in sehar time in the auspicious month of Ramadan due to various physical or biological factors.
Pooja Safaya and Mansi Salaria while speaking said that it was tough to work on such a big project for a large community in a short time period but we were fully guided, motivated and supported financially by the College Management without the help of which this project could be a dream for us. “We have developed this app in 72 hours. They added that though it’s a small initiative from our side but we aim to add Azaan prayer along with the alarm. In the beginning the app would work according to location of JK but in next few days it will work according to the location of entire Globe.
It is to be mentioned that earlier to this, four major innovations done by Aryans students namely “Aryans Android App” in lieu to make campuses paper free, “Aryans Save Kashmir App” which was developed for the rescue operation at the time of floods in Kashmir, “ Aryans Life Saving Glove” developed to provide timely assistance to the people prone to the risk of cardiac disease, “Aryans Safety Helmet” to provide timely first aid facility in case disaster happens at construction/ mining/ industrial sites were launched and applauded at various Government Levels and gained interest of many people.
It is worth mentioning that Aryans has emerged as a popular destination for the JK students. Aryans is the only campus near Chandigarh outside Kashmir having majority of JK students. Over 1500 JK students from various parts of Kashmir are studying in Aryans in various courses including B.Tech, Leet, LL.B, BA-LLB, MBA, BBA, BCA, B.Com, B.Sc(Agri), GNM, ANM, B.Ed, MA(Edu), Polytechnic Diploma etc.
Posted by tricitynews online at 04:40 No comments:

By Tricitynews Reporter
Chandigarh 27th May:- Generation Saviour Association is celebrating World No Tobacco Day on May 28, 2017 at Pracheen Kala Kendra, Mohali. To mark the celebration there will be a series of cultural events from Schools and also a one act play Suchetak Rang Manch. The event will also include result declaring of COTPA Compliance study conducted in 5 districts of Punjab by the team of PGIMER and also the Association will be releasing its annual Souvenir.
The function will be chaired by A.S. Chatha, Former Chief Secretary to the Govt. of Punjab; S. Kulwant Singh, Mayor, Municipal Corporation, M/S Janta Land Promoters Ltd; Dr. Anmol Rattan Sidhu, President Bar Association Punjab and Haryana High Court, along with other dignitaries from various departments.
Posted by tricitynews online at 04:32 No comments:

By Tricitynews Reporter
Chandigarh 27th May:- To identify cervical cancer among females VIA (Visual Inspection with Acetic Acid) screening of all females in the district SAS Nagar will be done to identify cervical cancer and awareness among females and teenage girls will be generated for various types of female problems. This was stated by Deputy Commissioner Gurpreet Kaur Sapra while addressing the Senior Medical Officer, ANMs, LHV (Lady Health Visitor) at auditorium of Punjab Health System Corporation.
Gurpreet Kaur Sapra said that since ANMs and LHVs are connected with people at village level therefore they can play a very prominent role for this. During this, Gurpreet Kaur Sapra asked Dr. Jai Singh and District development and Panchayat Oficer D. K. Saldi to generate awareness among females about VIA screening for cervical cancer with the help of village panchayats, so that every female could ensure her VIA screening. During this, she asked all ANMs to brought minimum 15 cases of VIA screening within week at nearby primary health centre. During this she also asked to ANMs, LHVs and Asha workers to generate awareness among general public at grass route level for the various health schemes.
Deputy Commissioner said that best performing ANMs will be honored on Independence Day. She further said that being aware about the self health; females could get their medical checkup regularly and could live better and healthy lives. She especially appealed the females and teenage girls to be aware about the health problems.
During this Civil Surgeon Dr. Jai Singh said that cervical cancer can be cured if it is identified at initial stages. She said that under NCD program special efforts have been done to eliminate cervical cancer at initial stages. After the VIA screening suspected cases are being diagnosed by the experts and requisite tests are also being performed. She appealed the females to approach nearby primary health centre to ensure their VIA screening for prevention of cervical cancer.
During this District Family Planning officer Dr. Usha Singla said that MHS (Menstrual Hygiene Scheme) has been implemented in 6 districts of Punjab namely Moga, Faridkot, Ferozepur, Muktsar, Mansa & Bathinda and for its implementation in district SAS Nagar, a proposal has been sent to Government of India.  Under this scheme school going teenage girls of the age group 10 to 19 years will be covered and awareness among them will be generated for health problems.

Posted by tricitynews online at 04:28 No comments: 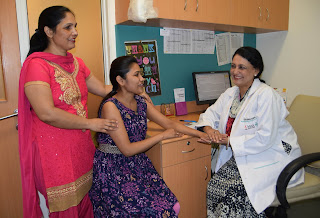 By Tricitynews Reporter
Chandigarh 27th May:- A Polycystic Ovarian Disease Clinic has launched at Max Super Speciality Hospital, Mohali today.
Speaking during occasion, Dr Kamna Nagpal, associate director Obstetrics & Gynaecology at Max  Hospital said that Polycystic  ovarian Syndrome (PCOS) is the  commonest  hormonal disorder in women in which the eggs in the ovaries are not released but develop small cysts in their ovaries. PCOS could be a result of both genetic and external causes and is affected by our lifestyle.
Dr Kamna Nagpal said that studies have shown that one in five women in India suffer from  PCOS, with rates as high as up to 22.5 % in female population. These rates are higher in urban population as compared to rural population.
Explaining this common disorder, Dr. SK Mathur, director-Endocrinology said that in PCOS, an imbalance of female hormones and male hormones is developed . Normally an ovary makes a tiny amount of male hormone but in PCOS there is increased production of male hormones which results in patient getting PCOS.
Dr. SK Mathur said that this results in acne, facial and body hair and obesity which  is cosmetically very distressing for young women. Due to suppression of egg formation it further results in menstrual irregularity and infertility. If these patients with PCOS become pregnant they have an increased incidence of miscarriage like twice the risk of normal  pregnant women as well as risk of developing pregnancy complications like gestational diabetes, pregnancy induced hypertension, preterm delivery as well as neonatal morbidity and mortality. He added that long term consequences of this disease include sleep apnea, disorder in lipid profile, endometrial cancer and cardiovascular diseases.
Dr  Kamna  further informed that  depression and anxiety in women with PCOS is a common presentation but often overlooked and therefore left untreated. There is a tremendous negative psychological impact on patients of PCOD who have weight gain, excess hair growth on body and face, pimples, hair loss as well as inability to conceive.
Dr Kamna Nagpal said that approximately 34% of women with PCOS have depression as compared to 7% in general population and 45% of these patients have anxiety as compared to 18% of general population. It has been shown that the longer it takes to diagnose and treat PCOS , the more likely they will be to develop depression and anxiety related disorders.