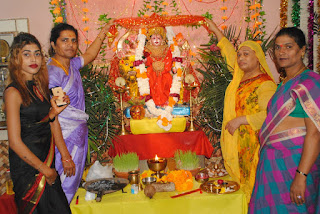 Posted by tricitynews online at 05:21 No comments:

Ankur School Celebrates the Victory of Good over Evil 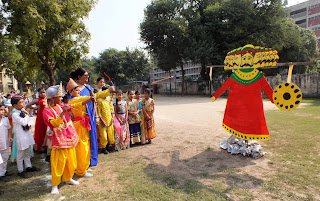 By Tricitynews
Chandigarh 18th October:- Dussehra, the festival of victory of evil was celebrated with great enthusiasm at Ankur School located in Sector 14. Principal Dr. Parminder Duggal highlighted the importance of Dussehra and students presented colorful dances winning applause of the audience.
Under the cultural program, the students presented dance, short play before the audience, which everyone appreciated. On this occasion the Principal of the school also honored the students of sports and various competitions.
At the end of the program, the effigy of a huge Ravana of the school premises was also burnt. Students were seen dressed up as Lord ShriRam, Laxman and Sita. The finale when Ravana was burnt proved to be very exciting for the audience, including students and teachers. Everyone greeted each other with Dussehra wishes.
On this occasion, the school's Principal Dr. Parminder Duggal highlighted the significance of Dussehra and told the students that this festival symbolizes the victory of good on evil. From this day, we should lead a simple and good life by ending evil from our lives. We should always follow good path and should be ready to help others.

Posted by tricitynews online at 05:14 No comments:

Movie 'Ranjha Refugee' All Set to Be Released on October 26 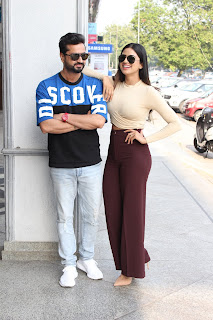 By Tricitynews
Chandigarh 18th October:- “Ranjha Refugee” is an upcoming Punjabi film which will be released on October 26, produced by Tarsem Kaushal and Sudesh Thakur under the banner of JB Productions. The film is written and directed by Avtar Singh who is well known for his films like Mitti Na Pharol Jogiya(2015) and Rupinder Gandhi: The Robinhood (2017). Both of which were written and directed by him.
In this movie Roshan Prince is playing a character of Ranjha Singh in the movie and Saanvi Dhiman is his love interest. This movie also talks about India and Pakistan. The most eye catchy part of this movie is that Roshan Prince is seen in double role in the trailer.
This movie is a romantic drama and full of comedy. Set in the years before the war of 1971 broke out, it tells the story of a guy, who tries to get the love of his life, Preeto. Preeto’s mother fixes her marriage somewhere else and Ranjha makes every effort possible to break the marriage. He eventually gets success in the same, but owing to this act faces the wrath of the entire village. He then goes to the front lines to start another chapter and join army, wherein he meets his duplicate who belong to the other side of the border. A series of events leads this trespasser Refugee from Pakistan come to India and take on Ranjha's place.
Packed with so many twists, it is scheduled to hit the box office on October 26. The stellar cast of the movie includes Roshan Prince, Saanvi Dhiman, Karamjit Anmol, Harby Sangha, Malkeet Rauni & Nisha Bano. In the movie, music is given by Gurmeet Singh, Jassi X and RD Beat while lyrics are written by Happy Raikoti and Babbu Singh Maan.  Roshan Prince, Mannat Noor, Feroz Khan, Nachhater Gill and Jaggi Bajwa are the singers in this movie.

Posted by tricitynews online at 05:09 No comments: 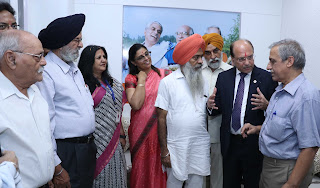 By Tricitynews
Chandigarh 18th October:- Showing that it cares for the senior citizens, Bank of Baroda has come up with a unique concept of Senior Citizen Lounge-PRERNA, wherein senior citizens are provided a homely comfort zone and a completely dedicated team. One such Senior Citizen Lounge is being launched at the Bank’s Sector 22-B Branch in the city.
The Lounge will be inaugurated by Regional Director of the Reserve Bank of Indian Rachna Dixit and Zonal Head of the Bank of Baroda, Rakesh Bhatia.
Divulging the details, Sanjay Gupta of the Bank of Baroda, Sector 22-B said that the concept has driven its name from the inspiration that our elderly always give. And now it’s time for us to payback. Senior citizens form our special segment of customers and it is for them that we have derived this concept of Senior Citizen Lounge-PRERNA.  Here we have a completely dedicated team for our senior customers who have been associated with us for long. We intend to provide them more comfort and a homely feeling while banking”.
Sanjay Gupta added that ‘Never lose touch with old people because everything is not found on Google’.
Posted by tricitynews online at 05:00 No comments: 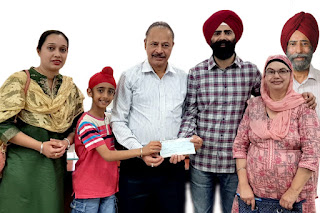 By Tricitynews
Chandigarh 18th October:- Amanpreet Singh Saini, an NRI from Sydney donated Rupees Five Lac to the Poor Patients Welfare Fund of PGIMER. His inspiration has been his mother since his childhood. Harbhajan Kaur, his mother had earlier donated rupees 10 lac on the Institute's Foundation Day.
Not only mother and son but the whole family has been involved in giving to the poor and needy. The two grandsons of Harbhajan Kaur have also been donating for the poor both inside and outside PGI. In recognition of her services, PGI had honored her on the Institute's Foundation Day this year.
Posted by tricitynews online at 04:54 No comments: 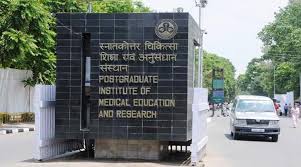 By Tricitynews
Chandigarh 18th October:- All OPDs in PGI shall remain closed on 19th October, 2018 on account of Dussehra, a gazetted holiday. Emergency services will function as usual.

Posted by tricitynews online at 04:47 No comments: