4 Year Old Child Now Able to Chew Food-Able to Sit without Support for 5 Minutes: A Gift Of Life From NeuroGen Brain & Spine Institute 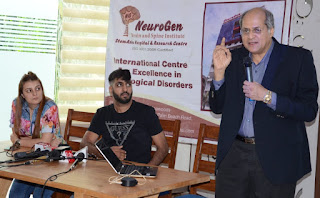 Posted by tricitynews online at 06:14 No comments: 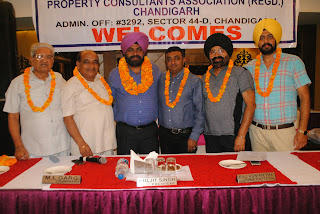 Posted by tricitynews online at 06:00 No comments:

By Tricitynews
Chandigarh 27th July:- The Punjab and Haryana High Court Bar Association had convened a  General House meeting at 10:30 AM in the New Bar Complex under the Chairmanship of Dr. DayalPartap Singh Randhawa on the issue with regard to the notification for Constituting of Haryana Administrative Tribunal dated 24.07.2019. The Honorary Secretary RohitSud has initiated the proceedings. Thereafter the General House was addressed by many speakers who addressed their views before the General House in this regard.
After gauging the sentiments of the Bar and considering the views of the above said speakers, the General House of the Punjab and Haryana High Court Bar Association unanimously in one voice decided that the work suspension should be indefinite till the withdrawal of the abovesaid notification, being unconstitutional, illegal and arbitrary, as well as injustice for the employees of the Haryana Government as well as for all the Advocates.
Further, it has also been unanimously decided that the General House meeting will be held on Monday after the meeting of the Executive Committee to decide the further course of action.
Further, the General House has also condemned the brutal murder of Mr. Naveen Yadav, Advocate in Sohana District, Gurugram, Haryana only earning member of the family.
The copies of the abovesaid resolution has also been forwarded to Hon’ble Chief Justice of India, Hon’ble Chief Justice of Punjab and Haryana High Court, Hon’ble Chief Minister of Haryana, Advocate General of Haryana, Hon’ble Union Law Minister, Hon’ble Home Minister, Chairperson, Bar Council of India, Chairman, Bar Council of Punjab and Haryana, Honorary Secretary, Bar Council of Punjab and Haryana.
Posted by tricitynews online at 05:10 No comments: 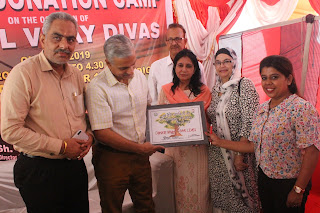 By Tricitynews
Chandigarh 27th July:- Paying rich tributes to the bravehearts of Kargil on Kargil Vijay Divas, ROTTO PGIMER in collaboration with the NGO Shree Shiv Kanwar Mahasangh Charitable Trust organised an Awareness and Pledging Camp on Organ Donation alongside the Voluntary Blood Donation Camp at the Bridge Market, Sector 17, Chandigarh.
The Camp organised with an intent to generate awareness on Blood and Organ Donation and thereby save precious lives, otherwise being lost due to shortage of either blood or transplantable organs, concluded on a positive note today with 144 volunteering to donate blood and 52 registering as organ donors.
Sanjay Beniwal, Director General of Police, Chandigarh graced the occasion as the Chief Guest, and inaugurated the camp. Later while interacting with the blood donors, Sanjay Beniwal commended them for their social commitment. Emphasizing that there cannot be anything more altruistic than giving someone a second chance to live, Mr Beniwal shared that he himself had been a regular blood donor.
Later, Sanjay Beniwal interacted with the resource team from ROTTO (NORTH) PGIMER at the awareness and pledging stall on Organ Donation put up at the venue. Expressing his happiness and evincing a keen interest, the DGP assured his full support for the promotion of the noble cause of Organ Donation.
Commemorating the spirit of Organ Donation, Sanjay Beniwal was also gifted a painting, as a token to reiterate the fact that ‘circle of life’ should not break. The painting was made by school students on the theme of Organ Donation under ROTTO NORTH’s school engagement programme.
Sharing his views, Prof. Vipin Koushal, Nodal Officer, ROTTO (NORTH) PGIMER said that as Police has a very important role in Organ Donation considering the fact that most of the potential donors are generally road side accident victims with fatal head injury wherein NOC from Police is required to proceed with the retrieval of the organs, the personal presence and keen interest by DGP for the cause of Organ Donation sends a very encouraging message among police personnel to be more sensitised and supportive towards the cause and be instrumental in saving precious lives.
While enumerating about the initiative,  Rakesh Sangar, President, NGO Shri Shiv Kanwar Mahasangh Charitable Trust,  shared that community service has been the core mandate of the Trust and there can not be better service than giving someone a fresh lease of life to someone through blood or organ donation. It is this vision that has sustained us for over 25 years in public service.
Posted by tricitynews online at 05:05 No comments: 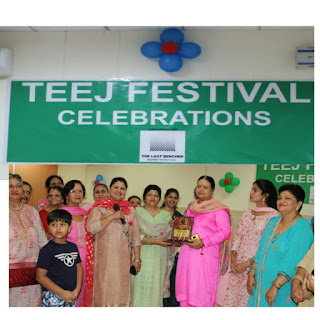 Posted by tricitynews online at 04:55 No comments: