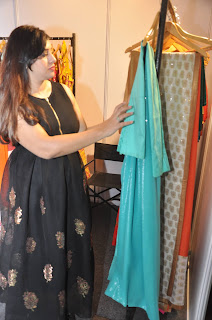 By Tricitynews
Chandigarh 29th Feb:- A unique Trunk and Fashion Show 'The Known and Unknown Edit 2' was held at Sukhna Enclave, Kaimbwala Road, Chandigarh.
The one of a kind fashion extravaganza was organised by Babi Grewal & Sarah Mehra, Co-founders of The Known & The Unknown Edit. The event turned out to be a paradise for tricity's fashion enthusiasts, as it presented 38 top fashion labels from across the country. Not only fashion, there was a delightful assortment of labels and brands in genres like  Jewellery, Home Decor, Health Consulting, Accessories  and much more at 'The Known & The Unknown Edit.' There was an elaborate food section which saw The Catering Co & Vasano presented mouthwatering delicacies.
Sarah said that the Trunk Show showcased various Fashion Week Designers such as  Abraham & Thakore, Varija Bajaj, Mandira Bedi  & Babi Grewal,  and many more emerging designer labels and brands from across the country.
It was a one-stop destination for one's fashion & lifestyle needs and the who's who of the tricity fashion circuit could be spotted.
Babi Grewal said that the Known & Unknown Edit was a one of a  kind event as it brought fashion from the ramp straight to the stall, for the potential customers to buy it straight off the Runway.
The glittering night of 'The Known & The Unknown Edit 2’ also witnessed a fashion show in which the beautiful, exquisite and well curated collections on the 'Spring Summer Collection 2020' theme were presented. These collections by some renowned India Fashion Week designers were displayed by 20 models who walked the ramp wearing them.
India fashion week designers Varija Bajaj and Babi Grewal interacted with media and shared details about their collections. Varija Bajaj who is a member of FDCI(Fashion Design Council of India) and has been part of India Fashion Week for several seasons  said, "Focusing on the free-spirited bohemian culture my line  LELA  showcased a Boho Chic collection at Chandigarh to provide one with the experience of wearing clothes and start celebrating life for no special reason. LELA-is all about fusion Pret wear is the brand child of VARIJA Lifestyles." It is noteworthy that Varija being a successful entrepreneur, in an unorganized fashion sector, is now a case study in ISB Hyderabad, the most reputed B-schools of the country.
Babi Grewal, who recently showcased at the Blenders Pride show, also showcased her collection and interacted with media. Babi said, "My collection-'Iluminate', was an evening collection with saturated shades of blue, dark green, maroon, dark red and black. To make the individual shine bright and beautiful like water in the sea, dark, mysterious, impenetrable yet illuminating.
The highlight of the trunk show was celebrity designer Mandira Bedi's showcase. The renowned Bollywood actress turned fashion designer Mandira Bedi's sari collection attracted attention at the trunk show. The 'Mandira Bedi Sari brand' encapsulates the very essence of Mandira herself and embodies her distinct taste. She had brought forth her latest collection 'Sirius'. It is based on the brightest star in the night, an effective play of juicy pastels and sparkly sequins, with structure blood colors and subtle bling. A perfect outfit for the festive season, to bring out the star in you.
Meanwhile the team which backed the event was extremely talented and very professional, , and the fashion show was choreographed by a renowned fashion show director, Jibran Khan. The other partners of the event included Creatiavtorss modelling agency and there were many other official partners who helped in bringing the  event to the next level.
Posted by tricitynews online at 04:46 No comments: 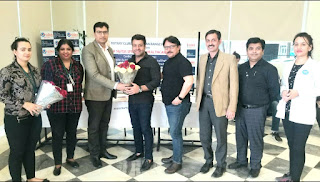 By Tricitynews
Panchkula 29th Feb:- As many as 150 people were examined during a free multi-speciality health camp at Ojas Hospital,Panchkula on Saturday. The camp was organized by Rotary Club, Himalayan Ranges-Mansa Devi.
A team of Ojas doctors including Dr Suresh Singla and Dr Gagandeep Gupta from orthopaedics , Dr Pankaj Gupta from cardiology, Dr Deepti Singla from gynaecology, Dr Abhay Gupta from urology and Dr Gaurav Jain from neurology and Dr Gaurav Jain from neurology gave consultations during camp.
During occasion, Gaurav Ghai, president of club was honoured. He said that the club will arrange such camps in future also. The aim of camp was to provide multi-i specialty services to people of in and around area.
Posted by tricitynews online at 04:25 No comments: 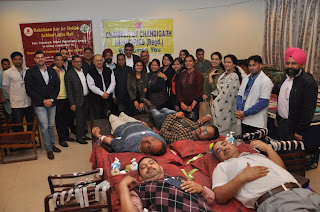 By Tricitynews
Chandigarh 29th Feb:- Chamber of Chandigarh Industries under its corporate social responsibility initiative, organised the 22nd Blood Donation Camp at the Community Centre, Industrial Area, Phase I, here.
As many as 250 units of blood were collected at the camp.
Naveen Manglani, President, Chamber of Chandigarh Industries said that we have already successfully conducted 21 blood donation camps. Apart from an annual blood donation camp, the chamber from time to time keeps taking social initiatives which are aimed at helping economically weaker sections of society. The blood donation camps are held annually to help in creating a buffer of this important resource.
The blood bank of Post Graduate Medical College of Education and Research (PGIMER) collected the blood under the supervision of Dr Suchet Sachdev.
Ashok Goel, General Secretary, Chamber of Chandigarh Industries said that the unique aspect about the event was that not only blood was collected but there were free of cost  tests available for Creatnine, Calcium, Sugar (Random)and Cholesterol. The Bharat Vikas Parishad collaborated with the Chamber to provide this facility.
Rajwant Singh, Chairman, Blood Camp, said that the donors by and large were chamber members, members of their families, employees, and a sizable number of female donors also donated blood.  Senior officers heading different departments of Chandigarh Administration also visited the camp.
Gifts and health tonics were distributed to all the donors and a bhandara was also held for the industrial employees. Such camps help in filling the wide gap between demand and supply of the precious gift of life -blood. By conducting the camp the chamber has provided an example which is worth emulating by other organisations and society.
Posted by tricitynews online at 04:20 No comments: 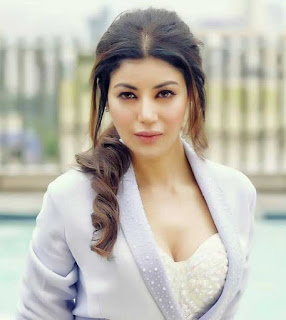 By Tricitynews
Chandigarh 29th Feb:- Sony SAB’s fantasy show Aladdin: Naam Toh Suna Hoga has kept the excitement levels high for its audiences and is about to bring in some more thrill with a new entry. Although things seemed to be improving for Aladdin (Siddharth Nigam), with him and Yasmine (Avneet Kaur) coming together and Ammi (Smita Bansal) getting back both his sons – Aladdin and Ginoo (Raashul Tandon), things are about to take a disastrous turn.
The very glamorous Debina Bonnerjee is here to raise the excitement for the viewers of Aladdin- Naam Toh Suna Hoga as she is all set to don the role of Mallika, the ultimate villain. She will leave no efforts in turning Aladdin’s life upside down.
Sharing about her role, Debina said that it is always exciting to portray a new role and with a fantasy show like Aladdin: Naam Toh Suna Hoga, the character is even more magical and grand. She is thrilled to be playing the role of Mallika in a story which has painted her childhood with beautiful memories. Mallika has been brought to life with immense care and thought. The mere look of the character speaks volumes about her significance in the show. She is excited to play a negative character as she has so many layers to her personality to play with. She feel, Mallika will be a character she will always remember.
Talking about her look, Debina shared that it almost took 3.5 hours to perfect Mallika's look. While the look is grand, a lot of detail has gone into making her look inevitable and beautiful. It’s thrilling to adorn different make-up and play larger than life characters. She really look forward to portray Mallika at her full glory.
Debina, who has previously been of the Sony SAB family, is overwhelmed to be coming back to the channel as she shares that she is a protégé of Sony SAB. At the time when she was playing monotonous, one kind of roles, Sony SAB helped me break that monotony and gave me a new identity. Being a part of Chidiya Ghar was a great thing that happened to her as the character got widely recognized by people.
Posted by tricitynews online at 04:04 No comments: 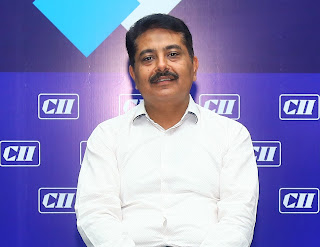 By Tricitynews
Chandigarh 29th Feb:- Rahul Ahuja and  Bhavdeep Sardana newly elected  Chairman  and  Vice Chairman of CII Punjab for the year 2020-21 have welcomed the budget presented by the Finance Minister, Manpreet Badal.
Rahul Ahuja said that the proposed industrial parks in Mattewal, Bathinda and Rajpura on the Amritsar-Kolkatta Industrial Corridor and a pharmaceutical park in Wazirabad in Fatehgarh Sahib would help in building the industrial profile of the State and also generate the employment opportunities for the people of the State. He welcome the budgetary allocation for up-gradation of all industrial focal points which badly need the makeover but he added that the allocation could have been more for the up-gradadtion of infrastructure in the existing focal points. Allocation of Rs. 50 crore to acquire the land for Patti Makhu Rail Link would not only  promote the tourism of the holy city as the distance between Amritsar and Mumbai will be reduced by 240km it but also boost the exports from the region.
Bhavdeep Sardana said that the plans to bring about diversification in agriculture by giving a boost to maize cultivation are welcome. He also lauded the finance minister for taking care of environment by earmarking Rs 2,510 crore for supplying canal water for irrigation and proposing a scheme, “Save Water Earn Money”, which is aimed at rationalizing the use of tube wells.
He also congratulates the Finance Minister for coming out with a Development Oriented Balanced Budget and giving priority to the education sector which is the need of the hour. The decisions to set up Mega Industrial clusters for Textiles, Pharmaceuticals & Green Industries and provisioning of Rs 131 crores to Modernise Industry will definitely boost Industrial activity in the state.
Posted by tricitynews online at 03:57 No comments: