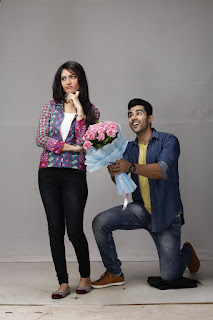 By Tricitynews Reporter
Chandigarh 06th January:- The journey of the newly married lead couple Rahul (Abhishek Bajaj) and Preet (Anju Jadhav) in Sony SAB’s Dil Deke Dekho has definitely not been a cake ride. In a desperate attempt of making her father-in-law accept her apology, Preet ends up taking up a task that she is not confident of pulling off. Atal, a strict father-in-law tells Preet that if she wants acceptance she should cook food in the house. Preet seeks help from her husband Rahul by telling him to bring food from a restaurant. Rahul in turn, sneaks some food from the Chopra’s kitchen with the help of Kamal (Amit Tandon).
Kamal keeps Simran out of the kitchen. Meanwhile, at the Shastri residence Mohini walks in the kitchen searching for food, Preet makes an excuse and tells her that there will be no food served till the pooja is over. When the pooja finally gets over, there are still no signs of the food in the kitchen.
Commenting on the track, Anju Jadhav who plays Preet said that it was fun shooting for this sequence. It will be interesting to see whether this cooking drama will help her in sorting out differences with her in laws or will it add to the chaos.
Posted by tricitynews online at 04:32 No comments:

By Tricitynews Reporter
Chandigarh 06th January:- Chandigarh Police achieved another success in a major breakthrough of 2017 Anti Snatching, Robbery and Dacoity case. The detection cell of Crime Branch Chandigarh under the supervision of Inspector Amanjot Singh arrested four persons Amrit Kumar@ Ganja S/o Dalip Singh of  Village Jagatpura  ph-2 Mohali, Gurpreet Singh @ Sanju of  Vill Khuda Lahora Chd., Raghav S/o Bhupindr Singh Rana of  Village Khastal Distt. Tihri Gharwal U.K. and Vikram Singh @ Vikcy S/o Bhupindr Singh Rana R/o Village Khastal Distt. Tihri Gharwal U.K. on January 04, 2017.
Superintendent of Police Ravi Singh in an press Conference stated that  on January 04, 2017 a secret information has been received that 4 boys who were involved in several cases of robberies, snatchings and auto thefts will get together in Botanical garden Dhanas, on this information the team was constituted and all the above four boys were apprehended and from their possession deadly arms were recovered.
He further said that during the interrogation of these accused it has been revealed that they are involved in several cases of robberies, snatchings and vehicle thefts in the  area of Chandigarh and from them Anti Snatching, Robbery and Dacoity detection cell of Crime Branch is able to solve 15 cases. Out of these 15 cases 3 are of robbery, 4 of snatching, 8 of auto theft. From them 7 mobile phones, two Activas and 6 stolen motorcycles were recovered.


He informed that the modus operandi of these criminals is that they used to first steal a bike and on that stolen bike they used to rob and snatch bags and cash from the area of Chandigarh. The reason for their indulging into the crime is that they are in habit of narcotics, gambling and drinking.
Posted by tricitynews online at 04:27 No comments:

By Tricitynews Reporter
Chandigarh 06th January:- A day after Jagmeet Singh Brar released the first list of TMC's candidates, more defections within AAP have begun. Today founder member and State Secretary Tarandeep Sunny resigned from AAP along with their supporters and joined the TMC.
Tarandeep's departure is being seen as a major blow to AAP in the Doaba region as he was not only one of the party's founding members, he was also closely associated with Anna Hazare and was a member of the 5 member founder committee formed in the state that brought in all the big names to contest the 2014 Lok Sabha elections, and also as a member in the State Screening Committee. His organizational role was also increased as recently as last week when he was appointed State Secretary of the AAP in Punjab.
The second setback to AAP came when Baba Pal Singh Randhawa joined the TMC. Baba Pal Singh is a known close confidant of Delhi CM Arvind Kejriwal and was the link between AAP and the Sant Samaj in Doaba and has considerable sway in Kartarpur, Shahkot and Adampur and in the Valmiki & Ramdasiya communities.
The third blow was dealt by Dr Aman George, president of the Christian Movement in Jalandhar after he withdrew support from the AAP and joined the TMC.
Others who joined the TMC at the event today include Youth Committee and District Committee members Uday Pratap Rathore, Jaskaran Singh, Jaspreet Singh, Chander Kalir, Gurkanwal Preet Singh, Himmat Randhawa, Pradeep Happy, Adv Jaspal Singh, Gurpreet Singh, Mukesh Vij and Mandeep Singh.

Posted by tricitynews online at 04:15 No comments: 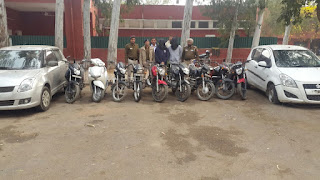 By Tricitynews Reporter
Chandigarh 06th January:- Anti Auto Theft Squad of Crime Branch has succeeded in arresting two accused Rajdeep Singh s/o Raghbir Singh of District-Moga, Punjab and Sahibdeep Singh @ Sahib s/o Jagtar Singh of  District-Mohali, Punjab and with their arrest nine cases of vehicle theft have been worked out.
While interacting with the media, Ravi Singh SP, Crime & Operation said that on 31st December,2016, on a tip of a team of Anti Auto Theft Cell of Crime Branch headed by Inspector Gurmukh Singh under the close supervision of Pawan Kumar, DSP/Crime laid a naka near T-Point, Sector-2/11, Chandigarh. During checking, the team apprehended above said accused persons alongwith a stolen two wheeler bearing registration No. PB-03-AJ-0351, make-Aviator while they were coming from the side of Village-Khuda Alisher, Chandigarh. On further checking, the said two wheeler vehicle found to be stolen vide FIR No. 220 dated 28.05.2016 u/s 379, 411 IPC, PS-17, Chandigarh. Both the accused were arrested in the said case. He further informed that during interrogation, they disclosed that they have stolen number of vehicles (four wheelers and two wheelers) from the different part of Chandigarh as well as Punjab.
SP Ravi Singh said that on 01st January, 2017, upon their disclosure statement, both were produced before the Hon’ble District Court and obtained 02 days police custody remand for further investigation.  During the course of further investigation, 09 stolen two wheeler vehicles and 02 four wheelers (cars) were recovered at their instance which led to solving of 09 cases of auto theft registered with different police stations of the city, Chandigarh and Punjab.
Besides this, 03 M/Cycles have also been taken into police possession u/s 102 Cr.P.C, which are being verifying to ascertain their ownership.
Giving detail about the modus operandi of the accused Ravi Singh informed that both the accused are alcoholic addicts. Accused Rajdeep Singh is working as scooter mechanic and accused Sahibdeep Singh @ Sahib is working as commission agent in DTO Office, Mohali, Punjab for preparing driving license/RC and other documents of the general public. They used to steal four/two wheelers from the different part of city and parked the same at different places. After that, they were trying to sell the same to the gullible people by preparing the fake documents. Mechanic Rajdeep also used the parts of the stolen vehicles to repair and put spare parts in the vehicles of general public having customers of him.
On 03.01.2017, both the accused were again produced before the Hon’ble District Court and obtained further 02 days police custody remand. The investigation is going on which may help to work out more cases of vehicle thefts.

Posted by tricitynews online at 04:11 No comments: