By Tricitynews
Chandigarh 12th June:- IN10 Media, a network with diverse offerings in the media and entertainment sector, including brands like EPIC TV, EPIC On, Juggernaut Productions, and DocuBay, will soon be launching a music channel – Showbox - a one-stop destination for music lovers, and musical entertainment. In a stagnant playing field where music channels have become predictable, and programming rigour has plateaued, Showbox promises a unique desi twist in its content offering.
With a conscious initiative to provide a platform for local music and independent musicians, Showbox boasts of an innovative content line-up in Hindi, Punjabi, Haryanvi, and other indian languages that along with music, includes Bollywood news, latest movie trailers, quirky interviews, unplugged music, updates on reality music shows, and much more. With a laser sharp focus on the youth as the core target audience, it aims to push the boundaries of quality entertainment.
Commenting on the latest offering from the IN10 stable, Mr. Aditya Pittie, Managing Director, IN10 Media said that at IN10, we aspire to create brands with innovation and disruption at their core, and we are excited to have Showbox on our shelf. It is a distinct offering in the current music entertainment landscape, with a clear and fresh positioning. As CEO, Ms. Rajiee Shinde has the perfect mix of insight and imagination to give wings to the vision of Showbox, and we are confident she will exceed expectations.
Commenting on the new music channel, Ms. Rajiee M. Shinde, CEO, Showbox said that Indians have an immense love for music, be it from Bollywood or in our spoken languages. Our appetite for music in all forms is inexhaustible, and there is a huge demand for music and entertainment content in Tier 2 and Tier 3 markets. Television penetration in these markets is rising, and an average viewer spends about three-and-a-half hours a day watching music channels on television. We felt there is a need for a platform that delivers local music in a great audio-visual format, and is a showcase for independent music artists, and young talent. With the launch of a versatile platform like Showbox, we will be able to address this segment.

Posted by tricitynews online at 05:50 No comments:

By Tricitynews
Chandigarh 12th June:- Chandigarh Housing Board will start cancellation of Small Flats of those who fail to deposit their pending dues during the ongoing camps. The camps are being held till 16.06.2019 (Sunday) between 08:00 a.m. to 01:00 p.m. including Saturdays and Sundays in all the respective colonies where the small flats are located. Hence the allottees of Small Flats have only four more days to deposit their dues to avoid cancellation. Accordingly cancellation notices have already been issued to many allottees and rest of the notices will being issued shortly. The cancellation will start from Monday i.e. 17.06.2019.
Since the allottees of Small Flats were not depositing the dues, despite many efforts in past, pending dues of rent has reached to more than Rs. 20 crores. Chandigarh Housing Board has decided to firstly organize a 10 days camp that provides one more opportunity to the allottees and then start cancellation of allotment will begin who will fail to clear the dues after the camp. Many allottees have cleared their dues during last six days and CHB has collected more than two crore rupees at the ongoing camps.
The detail of outstanding dues against each of the allottee/licensee of Small Flats as on 30.04.2019 is available on the website of CHB i.e. www.chbonline.in. In case there is any discrepancy/dispute, the allottee/licensee may pay the admitted outstanding dues and contact the Colony Branch at the office of Chandigarh Housing Board (Recovery Section, Block ‘C’) with proof of payment etc. for reconciliation.
In case of cancellation of allotment, possession of the Small Flats will be resumed by the Chandigarh Housing. Further in case restoration of allotment, the allottee will be required to firstly clear all the pending dues and also to pay the revival and other applicable charges. To avoid these inconveniences, all the allottees/licensees of the small flats are again requested to avail the opportunity of clearing the dues in next four days in the ongoing camps in their locality itself.

By Tricitynews
Chandigarh 12th June:- An online Admissions portal of Govt Industrial Training Institutes(http://www.itichdadmission.edu.in/) was launched by Director Technical Education, UT Chandigarh Sachin Rana and Jitender Yadav, Secretary (Sports & Establishment) at Govt. Industrial Training Institute for Women, Sector 11, Chandigarh.
This portal is an effort of Directorate of Technical Education, UT Chandigarh to facilitate the admission seekers to apply in the trades of ITIs for the upcoming session. The provisions of helpdesk and Grievances Cell have been also provided at GITI, Sector 28, Chandigarh and GITIW, Sector 11, Chandigarh to resolve the queries of students. Sh. Sachin Rana explained that being a part of 100 day plan, the portal was designed, tested and launched within a short span of time to provide extensive information to the students at one platform.

By Tricitynews
Chandigarh 12th June:- Bajaj Electricals Ltd., India’s leading Small appliances, Fans, and Lighting Company, today announced the launch of its revolutionary Anti-Germ with Bye-Bye Dust range of premium ceiling fans. This first-of-its-kind range comes with Anti- Germ Coating, a premium Metallic Finish, and vibrant new colors. The products are available across all major retail outlets, at a Consumer Price of INR 2,800/- onwards.
The three different models available under Anti-Germ with Bye-Bye Dust (BBD) feature are EURO NXG, ELEGANCE ROYALE, and HARRIER.
Because of Compact homes and changing consumer lifestyles, the quality of indoor air today is worse than that of outdoor air. This has made consumers conscious about the need for products that can combat germs Bajaj Electricals’ latest Anti-Germ range comes with the *Anti-Germ Coating* which is designed to protect from 99.2% germs and result in the eventual destruction of the germs on the Fan. Also, these fans come with the *Bye-Bye Dust* feature enabled by *Advanced Polymer Technology*, which not only prevents dust accumulation on the fans but also helps consumers in convenient and hassle-free cleaning.
The Anti-Germ Range of Bajaj Fans is tested and certified for performance by an ISO/IEC 17025:2005 Accredited Independent Testing Services Agency.
Bajaj Electricals also launched a host of Premium Ceiling Fans in refreshing designs and enticing colors.
Speaking on the launch, Atul Sharma, Executive President & Country Head–Consumer Products, Bajaj Electricals said that we are excited and proud to launch a breakthrough and first of its kind fans which are innovative and supported with the latest technology.  These fans are a complete mélange of comfort and elegance. We are confident that with the distinct features of Anti Germ coating and Bye Bye Dust, these new launches will be the preferred choice of the discerning consumer. The metallic finish and aesthetics are additional considerations for our consumers. This ensemble of fans will always be classified as smart purchases for our consumers. Realizing the market dynamics and the ever-evolving consumer needs, we at Bajaj Electricals Ltd. always aim to bring the best in technology that will enhance our consumers’ lifestyle.

Posted by tricitynews online at 05:25 No comments: 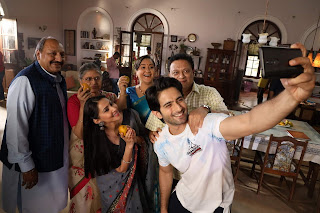 By Tricitynews
Chandigarh 12th June:- Sony Entertainment Television is all geared up to bring to its viewers, Ishaaron Ishaaron Mein, a new and unique show that revolves around the life of a differently abled guy, Yogi played by Mudit Nayar. Recently, the cast of the show gathered to shoot the teaser and promos. In the shoot, Mango; king of fruits, played an important role and production had pre-ordered 10kgs of mangoes which ultimately turned out to be less. The actors who were lured and tempted looking at the yellow fruit, couldn’t help but gorge on mango after mango.
One such actor was, Rishina Kandhari who will be seen playing Yogi’s elder sister-in-law, Rani. Rishina has been following a very strict diet for quite some time and was trying hard to control her urge to eat mango. She ultimately gave up on her diet and did not eat just 1 but 6 mangoes! The actors had a good mango treat during the promo shoot.
When asked Rishina to share her feeling on breaking her diet she said that mangoes are her weakness and it is the hardest for her to control her urge when it is lying in front of her. Before the promo shoot, she had promised herself that she would not eat mango but, all her promises disappeared when she saw the mangoes and everyone enjoying them. Ultimately, she gave up on  her diet and started enjoying mangoes with her co-stars. She was so engrossed in eating that she lost count and when she saw she had already eaten 5 mangoes and had 6th in her hand.
Set in Delhi, Ishaaron Ishaaraon Mein is a fresh and unique show that will narrate the innocent yet gripping tale of Yogi, a differently abled guy, who lives a very beautiful life in a joint family. The show will also see a versatile cast including a fresh mix of new faces and veteran actors like, Swati Shah, Kiran Karmarkar, Sudhir Pandey, Sulbha Arya, Karaan Singh, Rishina Kandhari, Sumbhul Tauqeer, Gaurav Sharma, Saraswati Vijay, Aayesha Vindhara, Debattama Saha, Simran Pareenja, Nitesh Parashar and Virendra Singh.