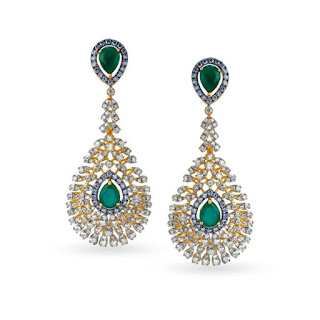 By Tricitynews
Chandigarh 07th December:- India’s most trusted and loved jewellery brand, Tanishq, has launched a stunning new jewellery collection, Preen – an exquisite range of earrings, rings, necklaces, pendants and bracelets, with designs that help capture the perfect look for celebratory moments.
This winter season, increase your glamour quotient with beautiful sapphires, tanzanite’s, emeralds and citrines, as part of the Preen collection that can be worn with sarees for that elegant, regal look, or with a fabulous shirt at a casual ladies day out. These gorgeous pieces bring out the beauty of the peacock, and compliment an outfit perfectly.
Whether it’s the striking finger rings, or the smart designs of necklaces that can also be used as bracelets, this collection is sure to make the wearer stand out in a room, either at a cocktail party, or a casual Friday evening. Pair it up with smart kurtas and palazzos, chic skirts or beautiful dress, it goes with whatever you decide to wear and helps increase your fashion scale and mantra.
Sharing her new thoughts on the collection, Deepika Sabharwal Tewari, Associate Vice President, Marketing, Jewellery Division at Titan Company Limited said that Tanishq has always prided in focusing on the latest trends and style demands of a woman. We are aware of the growing need to want a type of jewellery that matches the attire needed for a power packed social calendar. Not to mention, the innovative and modern way to wear the jewellery, as a necklace or as a bracelet. Be it get-togethers, book launches, movie premieres, pre and post wedding celebrations and many more occasions, our brand has noted the these are of the utmost importance in a modern woman’s social calendar, and with the new Preen collection, we want to cater to her fashion needs for the same. She wants to celebrate in style and Tanishq aims to make it make it perfect for her.
The collection is available from INR Rs. 30,000/- and going up to INR Rs. 2 Lakhs.

Posted by tricitynews online at 09:01 No comments:

Royal Fables Opens With a Preview at Plumtin: Its Preferred Couture Partner in Chandigarh 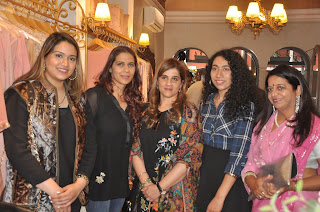 By Tricitynews
Chandigarh 07th December:- Royal Fables, a heritage platform that promotes regal, royal India in all its glory, is all set to unveil its first exposition in Chandigarh in association with Kanjimull & Sons by Gaurav Khanna at Taj Chandigarh, on 8th December 2018.
On the eve of its grand exposition Royal Fables collaborated with Samerjeet Gurm, Plumtin, a designer who has been a vital part of the platform for the last five seasons. She hosted a preview of the entire collection for the press and the visiting dignitaries.
On view at this preview was the Fall- Winter Couture Collection 2018 of Plumtin,. Guests also got the first view of the rare gems from Kanjimull & Sons, a house of jewels known for crafting masterpieces for Maharajas. Also presented was a glimpse of Royal Collections by the blue-blooded scions of Princely India along with handcrafted ensembles by Samarjit Gurm, Plumtin. The preview held today gave connoisseurs an idea of what is in store on December 8. H.H. Maharani Radhika Raje Gaekwad of Baroda was the chief guest.
Anshu Khanna, Founder, Royal Fables, said that Samarjeet through Plumtin tells past tales in her signature, resplendent style. Like our royal designers she too takes inspiration from the past and her fashion is a perfect idiom of past celebrating the present.
Samarjeet added that he feel so at home at Royal Fables. It is a great initiative and he is glad his city will get an up-close view of the fabulous craft that the royals nurtured in the past and continue to do so in the present.
On the 8th of December Royal Fables will present art, fashion, textiles and art objects made in leading palace studios across the nation. Besides hand-picked collections by leading designers and labels that keep the rich Indian handmade tradition alive.
Varun Khanna, Co-Founder, Royal Fables. Shared that this is the milestone year and we are trying to take the regal legacy to smaller cities and towns which are inhabited by luxury seekers and heritage lovers.  Royal Fables is envisaged as that one platform where we showcase the aura of Princely India as recreated by young scions of royal families.
Gaurav Khanna said that the bond between Kanjimull and Princely India dates back to 1870 when my great grandfather Kanjimull Khanna, started designing personal jewelry for the Royal family of Patiala. Other states of Punjab followed. Slowly our name spread right up to Great Britain and we were designing for the nobles of Britain. We at Kanjimull and Sons use the finest quality of gemstones and Diamonds and dare to experiment with rare color combinations to create fine jewels with interesting designs. He is excited to present our collection at the upcoming Royal Fables at the Taj Chandigarh.
On 8th the exposition opens with a formal launch by Vijayender Pal Singh Badnore, Punjab Governor.  The exposition closes with a talk on the handcraft legacy of Princely India, chaired by Rani Vinita Singh Patiala and moderated by Anshu Khanna. The evening ends to the sounds of live music by Prabhtoj Singh and a regal fashion walk featuring the visiting royal dignitaries who will dress up in their own creations. Many posing as muse to other royal designers. There will also be culinary showcase of royal cuisine led by two siblings Thakur Shivraj Singh of Limdi and Kanwarani Vijaya Singh Nahan who are both chefs at heart and blue blooded by birth.
The list of  royal participants is prolific and includes Princely families from across the nation including:  HH Maharani Radhika Raje Gaekwad of Baroda, Rani Vinita Singh Patiala, Rani Kavita Kumari Sahiba Jodhpur, Rani Uttara Singh of Jodhpur, Princess Nandini Singh of Jhabua, Rajkumari Alkarani Singh Pratapgarh, Rajkumari Richa Rajya Laxmi Danta, Kanwarani Kamini Singh Seohara, R.K. Chandni Singh Seohara, Baisa Pushpita Singh Kharwa, Rani Jaykirti Singh & Namrata Singh, Baria, Thakurani Darshana Kumari of Mandawa, Yaduveer Singh Bera, Rani Madhavi Mandloi Zamindar, Bada Rawala, Indore, Thakurani Madhulika Hada of Koela, Sonal Dayal Sarjolta, BBG Royals and Shivani Singh.

Posted by tricitynews online at 08:44 No comments: