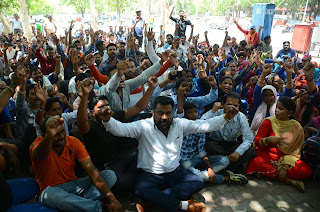 Posted by tricitynews online at 05:42 No comments: 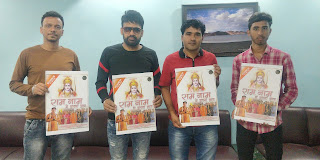 Several NGOs and Other Associations from Chandigarh Felicitate Sanjay Tandon 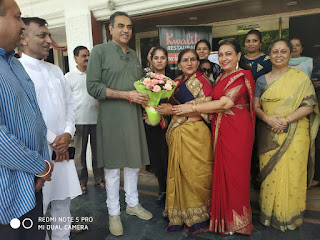 By Trictynews
Chandigarh 10th June:- BJP won the Lok Sabha elections with unprecedented vote margins. In Chandigarh too, the BJP candidate Kirron Kher won the seat with a large margin of votes. BJP Chandigarh President Sanjay Tandon played a key role to ensure the victory for BJP candidate in Chandigarh. Several NGOs and other Associations from Chandigarh organized an event to felicitate Sanjay Tandon for ensuring the victory. The event was organized in supervision of Santosh Sharma, Chairperson of Social Welfare Board Chandigarh. Other organization which took part in the event included Surya Foundation, Indian Counseling Foundation, All India Environment, Don Bosco Society, Savera and Art Colors.
Addressing the people at the event Sanjay thanked everyone for extending their support and blessings. He said that the people of the country have voted for a ‘kaamdar’ government. He said, with Narender Modi as the prime minister of the country once again, there is a lot of optimism and the country will definitely reach unprecedented heights of development in next 5 years. He said all small and big organizations supported BJP in these elections for which he is thankful.
Addressing the gathering, Santosh Sharma thanked everyone who attended the meeting. He said that BJP has won this seat the second time consecutively and Sanjay Tandon has played a key role in ensuring this victory. He said that Sanjay worked tirelessly day and night to make sure BJP candidate wins the seat.
District president Ravi Kant Sharma, Ward President Rajesh Mahajan, B C Gupta, Mahinder Kaur, Dr. Kiran, Sonia, Pinky, Suman and many other BJP activists were also present on the occasion.

Posted by tricitynews online at 05:03 No comments:

Anupam Kher Rejected by His Childhood Crush Because of Stammering, Revealed on The Kapil Sharma Show 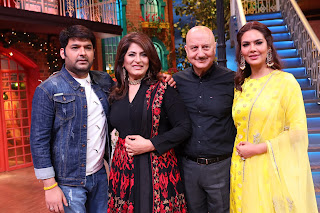 By Trictynews
Chandigarh 10th June:- From essaying the role of a 65-year-old retired teacher in his debut film, ‘Saaransh’, to portraying the role of, ‘Doctor Vijay Kapoor’ in an International series named New Amsterdam, Anupam Kher who is truly an attribution of applauds will be seen in the upcoming weekend episode of Sony Entertainment Television’s acclaimed comedy show The Kapil Sharma Show with graceful actress Esha Gupta. With Anupam Kher who comes with years of experience in the industry, his fans are sure to relive their days with him on the show.
Anupam’s fans are aware of the fact that how Anupam went through turning his weakness of stammering into his strength. The man who believes in, ‘will power’ and ‘patience’ confirmed that due to a childhood injury where he got hit by a stone in his mouth, he wasn’t able to pronounce the letter 'क' (ka) but instead he pronounced it as 'त' (Ta).
Sharing an incident from his childhood Anupam revealed that he belong to a Hindi medium school and in those days, a Hindi medium school boy proposing  to an English medium school girl was considered to be a tough task. In such a situation, he fell in love with an English medium school girl named, ‘Kavita Kapoor’. However, when he was about to confess his feelings, she challenged himto fluently say, ‘Kavita Kapoor I love you’ which was next to impossible. He wasn’t able to pronounce the initial letter of her name ‘क’ (ka). Unfortunately, he couldn’t complete the challenge and ended up saying, ‘Tavita Tapoor I don’t love you’.
The veteran actor later revealed that how with marble speech therapy treatment; he was finally able to get over his weakness of stammering after 3 years. Further in the show he even confessed that due to his poor English, he couldn’t impress his childhood crush.

Posted by tricitynews online at 04:56 No comments:

By Trictynews
Chandigarh 10th June:- The 7th conclave of All India State Bank Veteran Office Bearers Forum(AISVOF) is scheduled to be held on 16th June 2019 at Chandigarh. The participants include Comrade Amar Pal, TN Goel, Anirudh Akhauri (all former presidents of All India State Bank Officers Federation and Com G D Nadaf and Com Ram Sabapathy( former General Secretaries AISBOF) and a number of former Presidents and General Secretaries Of SBI officers’  Associations Of various Circles.
The Conclave will be inaugurated by Comrade Sanjeev Bandlish, Convenor United Forum Of Bank Unions (UFBU) and Key Note address shall be delivered by Com Sambhit Mishra, President AISBOF. Besides, Com Pawan Kumar, General Secretary SBIOA Lucknow Circle and Com Deepak Dharma & Com Sanjay Sharma, GS and President of SBIOA Chandigarh Circle will be the prominent Guest. Com A Ramesh Babu GS Federation of SBI Pensioners’ Association will be the special guest.
The conclave will discuss the problems of SBI Pensioners and chalk out a road map to resolve the issues especially the issues of improvement in regular Pension, Family Pension and Pension Updation on lines of Reserve Bank Of India, Central Government and also the Mediclaim Scheme.

Posted by tricitynews online at 04:48 No comments: 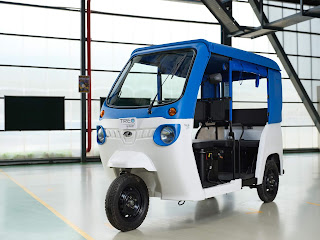 By Trictynews
Chandigarh 10th June:- Mahindra Electric Mobility Ltd, part of the USD 20.7 billion Mahindra Group, today announced that its electric 3-wheeler range Treo and Treo Yaari will now be available across Punjab. It will be priced attractively at Rs. 1.77 lacs (ex-showroom Chandigarh for Treo Yaari SHT) & Rs. 2.79 lacs (ex-showroom Chandigarh for Treo SHT)
Treo, India’s first lithium-ion electric 3 wheeler platform provides eco-friendly last mile mobility. The Treo platform was conceptualized to effectively cater to the needs of both individual customers and aggregators such as fleet owners and institutional buyers, while delivering a superior value proposition.
According to Mahesh Babu, CEO Mahindra Electric said that Mahindra Treo is India’s first electric three-wheeler to be powered by lithium-ion battery and comes loaded with many segment first features. However, the biggest USP of the vehicle is increase in customer savings thanks to its low-maintenance and running costs.  We are committed to offer the best after sales support through Mahindra’s wide spread dealer network. With Mahindra Treo, its users will definitely earn more per kilometre when compared to a conventional three-wheeler.
Both Treo models are available in the industry-first hard top weather proof variants. With the use of light weight technologies and composite body panels, the Treo offers a driving range of* 130 km (eAuto) in full charge. It also offers best in class comfort for passengers with one of the most spacious interiors in the segment. It’s clutch-less, noiseless and vibration free drive, offers the driver an absolutely fatigue free journey. Apart from all these benefits, Treo range also offers excellent earnings.
Posted by tricitynews online at 04:42 No comments:

By Trictynews
Chandigarh 10th June:- Known for their social and community initiatives, Indian Dental Association (IDA), Mohali Branch and Sood Sabha Chandigarh took the lead to collaborate with ROTTO PGIMER to promote the noble mandate of Organ Donation among their membership by organizing an Awareness and Pledging Camp on Organ Donation alongside the Blood Donation Camp at Sood Bhawan, Sector 44, Chandigarh. The Camp on a positive note with 58 volunteers pledging for Organ Donation on the occasion.
At the inaugural ceremony, Dr. Geeta Kalra, Coordinator (Camps), IDA Mohali Branch, said that community service has been the core agenda of IDA  and there cannot be a better service to humanity than giving someone a fresh lease of life through blood donation or organ donation. Through these humble social and community engagement initiatives, IDA Mohali Branch tries to instill a feeling of “living beyond oneself and giving back to the society” among membership and the response has been very encouraging. Other office bearers representing IDA Mohali Branch present on the occasion included Dr Vimal Kalia, Dr Satpreet Bhasin, Dr Romika Wadehra to mention a few.
While commending the initiative, Prof. Vipin Koushal, Nodal Officer, ROTTO PGIMER, stated that Organ Donation is an intention, a spirit of giving that is possible to actualize. It is high time we talk about it and pledge for it considering the fact that Organ Donation is a true ‘Gift of Life’ because it enables one to give ‘second lease of life’ to many critically ill patients in dire need of organ transplant.
Endorsing the need for public education as critical to bridge the gap between patients who need organs and potential organ donors. Dr Koushal hoped that the initiative undertaken by IDA Mohali Branch and Sood Sabha Chandigarh would inspire others as well to pledge for Organ Donation and help those with ‘bleak chances of survival due to end stage organ failure’ live a quality life through transplantation.
The team representing ROTTO PGIMER addressed queries on the myths and misconceptions pertaining to Organ Donation at the camp. Alongside, the participants were also oriented about the option of online pledging of organ donation to enable them make an informed choice at their own convenience and also spread message in the community.
The camp event concluded with the felicitation of the participating organizations  as well as guests on the occasion.
Posted by tricitynews online at 04:36 No comments: