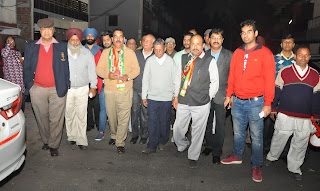 
Chandigarh 07th December:- Congress Candidate Jatinder Kumar Bhatia, from ward 21 during his election campaign visited parts of the sector 32 A Marla Houses,  along with his supporters and sought votes for the overall developments of the ward. He assures them of overall developments in the ward and the execution of the pending works that have been never taken up in the MC. He also assures proper maintenance of green belts and giving the sector an e-Sampark center are some of the works that are on the priority list.
Posted by tricitynews online at 05:46 No comments: 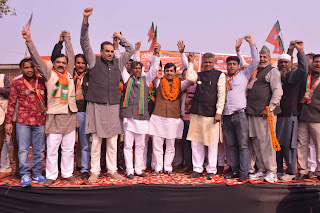 By Tricitynews Reporter
Chandigarh 07th December:-Senior BJP leader Shahnawaz Hussain, National Spokesperson of the Bharatiya Janata Party and a former Cabinet Minister was in Chandigarh today to join the election campaign being carried out by the BJP candidates in different wards. Hussain appealed to the people to vote in favour of BJP and assured the voters of complete support from the government for overall development of the city beautiful.
Shahnawaz Hussain visited Vikas Nagar, Mauli jagran; Manimajra; Grain market, Sector 26; Sector 29-B and Burail to support the BJP candidates Anil Kumar Dubey (Ward 24), Raj Kishor (Ward 19), Jagtar Singh Jagga (Ward 25), Shakti Parkash Devshali (Ward 20) and Kanwarjeet Singh (Ward 14) respectively. He was accompanied by Sanjay Tandon, Chandigarh State BJP President.
Giving the information, Ravinder Pathania, Media Incharge of BJP said that Shahnawaz Hussain while addressing the public meetings in different parts of the city he said Congress was misleading the Muslim community against Prime Minister, Narendra Modi. However the Muslim community was well aware of the development of country under the leadership of Narendra Modi.
He said that Narendra Modi was working for the betterment of the country irrespective of the caste, creed and religion. While elaborating on the schemes for the poor, he said in the last 2 years the Modi government had come out with 92 schemes while the UPA government during its 10 years of regime only indulged in scams. Shahnawaz Hussain added that demonetization move of the Narendra Modi government had got support from everyone.
While addressing the small vendors, retailers and residents in Grain Market, sector 26, Hussain echoed Tandon’s sentiments, and said that remarkable development work that Chandigarh has seen in the last 10 months is the outcome of the able and strategic BJP governance under the stewardship of Mayor Arun Sood, MP Kirron Kher and Prime Minister Narendra Modi. To continue the victory league and to keep the city progressing on the path of development it is indeed necessary to support BJP candidates.
Sanjay Tandon, Chandigarh State President of BJP while speaking on the occasion said during the BJP regime city had seen a lot of development while Congress leaders are only knows for scams and have been embroiled in controversies.
Shahnawaz Hussain was also accompanied by Ramvir Bhatti, Vice President BJP Chandigarh and Chairman market committee; Manu  Bhasin General Secretary, District 4; Subhash Randhawa, Director, Market Committee; Khurshid Ahmed, State President, BJP Minority Morcha; Manoj Kumar, Rajesh Kumar, Ashraf Ali, Desraj  Gupta, Amjad Ali and other senior party workers.
Meanwhile, the party candidates today campaigned in different parts of city and appealed to residents to vote for development. Gurpreet Singh Dhillon carried out campaign in his ward 21, Satish Kainth in ward 11, Arun Sood in ward 8, Heera Negi in ward 13 and Raj Bala Malik in ward 2, and Asha Kumari Jaswal in ward 17.
Posted by tricitynews online at 05:40 No comments: 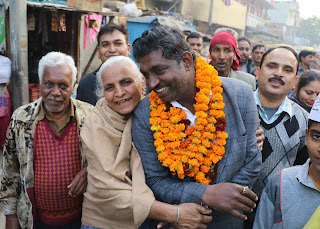 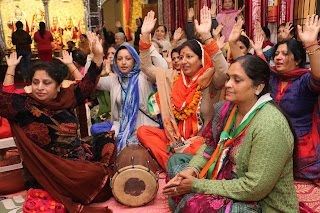 By Tricitynews Reporter
Chandigarh 07th December:- Congress Candidate Ravinder Kaur Gujral from ward number 15 i.e. sector 34, 35 and 44, during her door to door election campaign visited temple of sector 34 and took blessings of god for her win in the election. There she also met with the ladies and took part in Bhajan Sandhya. She interacted with the ladies in the temple s and assures them of overall developments in the ward and the execution of the pending works.
On the other side her Advocate Husband A S Gujral also visited different parts of the ward and seek votes for her wife.
Posted by tricitynews online at 05:00 No comments: 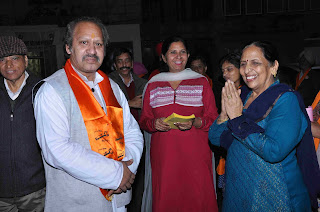 By Tricitynews Reporter
Chandigarh 07th December:- Independent Candidate Bharat Bhushan Kapila from ward number 14 i.e. sector 45 and village Burail, during his door to door election campaign visited different parts of the ward and met with peoples and seeks votes. He also met with the senior citizens of the ward and took blessings of them. He interacted with the peoples and assures them of overall developments in the ward.
Posted by tricitynews online at 04:55 No comments: 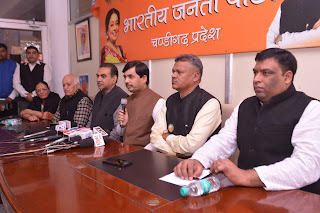 By 121 News
Chandigarh 07th December:- Shahnawaz Hussain, National Spokesperson of Bharatiya Janata Party (BJP) today said Chandigarh will have a Congress-free Corporation in the forthcoming MC elections.
Addressing media persons he said Chandigarh is close to the heart of Prime Minister, Narendra Modi who had stayed in city, adding, Chandigarh a lot of development works have been done under the BJP regime. While commenting about political scenario in Punjab he said, it was congenial for BJP-SAD combine.
Shahnawaz Hussain said that he is coming from other parts of the country, including Bihar and Kolkata and have firsthand account of problems being faced by the people. There are problems but are being tackled. The opposition says the Prime Minister should debate the issue in the parliament but when we start the arguments, the opposition runs away from it because they know BJP and NDA will counter them in their arguments.
He said after demonetization, Rahul Gandhi, Mamta Bannerjee and Arvind Kejriwal were all upset over it. Rahul Gandhi hairan hain, Mamta ji pareshan hain, Kejriwal bejar hain he said adding, even when many opposition leaders like Bihar CM Nitish Kumar and Odisha CM Naveen Patnaik were supporting the move.
He said that government is taking all measures to resolve the problems being faced by the people and in remote areas even choppers are being used to cater to the cash demand. Because of salary time people have faced problems. Shahnawaz Hussain stressed hoarding of new currency will not be tolerated and appropriate action will be taken.
He added that a lot of cash which has come in banks after demonetization is a big achievement of the government and will be used for welfare of the country. Tax payers are respected and will be rewarded, he added. Hussain said that time has come country should move in the right direction and it is going in the right direction under the able leadership of Prime Minister Narendra Modi.
Commenting on India-Pakistan relations, he said that surgical strikes have been done, but we must remember while surgery has been done now chemotherapy is on. While some doses have been administered, more doses will follow and Pakistan will be forced to stop supporting terrorism. Only then relations with India will improve. India has made all efforts to improve relations but Pakistan has not responded positively to it and will be taught a lesson.

Toyota to Increase Prices by Up to 3% in January

By 121 News
Chandigarh 07th December:- Toyota Kirloskar Motor revises prices increasing it by up to 3% effective from January 01, 2017. The decision is in line with the general industry trend prompted by increasing cost of manufacturing vehicles and a consistent upward trend in foreign exchange rates.
Expressing his views on the price hike, N Raja, Director & Sr Vice President, Marketing and Sales, Toyota Kirloskar Motor said that there has been an increase in pricing of raw material commodities like steel, aluminum, copper and rubber over a period of the last six months and this puts a lot of pressure on us as all this has been leading to a higher input cost on our end. Another factor leading to higher input cost in our case is the appreciation of yen in the international market which has increased the cost of parts that we import from Japan.
In addition, the company also announced the ‘Remember December Campaign’ which will provide exciting product offerings and benefits of 100% on road financing, EMI Holidays like- ‘buy now and pay in March 2017’ on all its models and a special EMI package of as low as Rs 22,999 in select models of Innova Crysta.
N. Raja further added that the Remember December campaign is not just about offering benefits on our products but it is also an effort from our side to meet the needs of the customers to help them overcome difficulties caused due to demonetization. Not just that, we are also accepting cashless payments through various channels of e-transfers to ensure smooth & hassle free buying experiences for our customers thus adding more value to the customer experience and meeting their expectations.
Posted by tricitynews online at 04:42 No comments: 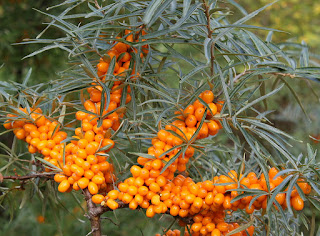 By 121 News
Chandigarh 07th December:- Prima Nature Care has launched first ever Seabuckthorn based Phyto medicine in India. This is found effective in treating various lifestyle related diseases like diabetes, Blood Pressure, Obesity and Arthritis.
Seabuckthorn, the magical fruit, seabuckthron found in Himalayas and likened with Sanjeevani Booti, has been in the limelight of various researches for its positive effects on the human body. Sea buckthorn is valued for its antioxidant, cardioprotective, antiatherogenic, antidiabetic, hepatoprotective, anti-carcinogenic, immunomodulating, antiviral, antibacterial, and anti-inflammatory and vasodilating effects.
Devender K. Mittal, Chairman, Prima Nature Care said that Seabuckthorn has the potential to become the prime savior of the diseases ridden world. The research has proven its efficacy to treat diseases caused by neuro-degenrative and cardiovascular disorders, as well as other serious ailments like diabetes, arthritis, burn wounds, and liver disorders.
Dr. Ashok Jain, Project Advisor, Prima Nature Care said that Seasbuckthorn is a storehouse of vitamins and nutrients and is aptly known as ‘natures’ bounty’ to the mankind. It is an extremely rich source of Vitamin A, B1, B2, C, E, K and unsaturated fatty acids like Omega-3, Omega-6, Omega-9 and palmitoleic acid, folic acid, major saturated fatty acids like palmitic acid, stearic acid along with monounsaturated fatty acids.
The wonder plant widely came into the attention of public when Dr. A.P.J Abdul Kalam, former president of India invited scientists’ community to conduct research upon the health benefits of this wonder plant. Seabuckthorn based Phyto Medicine by Prima Nature Care is the result of 30 years long research.
The formulation is patented in USA, France, Germany and Italy and now will be available in India giving sigh of relief for patients suffering with lifestyle disease. In India, the extensive research by Banaras Hindu University, Varanasi, SRM University, Chennai and Adesh University, Punjabhas proved the positive effects of Phyto Medicines in the treatment of major diseases.

Posted by tricitynews online at 04:39 No comments: 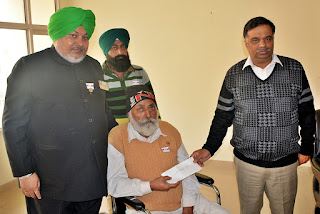 Posted by tricitynews online at 04:32 No comments: