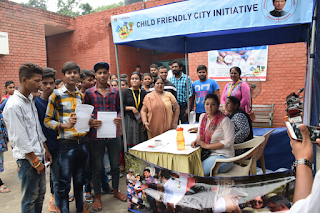 By Tricitynews
Chandigarh 21st July:- As a part of its Child Friendly city initiatives, Don Bosco Navjeevan Society, one of the most reputed non profit society, organised a free medical check-up and treatment camp on Saturday, July 21,2018 in association with Karnataka Bank to provide healthcare support to women and children  of Dadumajra, Chandigarh. Councilor of Dadu Majra Colony was the chief guest. The medical camp was organised at Dharamshala of Dadumajra village in Chandigarh. President of Rotary club was also present.
More than Around 300 people from Dadumajra and nearby areas benefited from this noble initiative.
A team of 6 doctors including Acupressure, Child specialist, Homeopathy, Pain Management Specialist  and dental staff from govt. hospital rendered their services in the camp. Patients underwent health checkups by a team of  doctors and were given consultations and medicines were distributed free of cost.
Speaking on these important initiatives Father Reji Tom, Director, Don Bosco Navjeevan Society said that Don Bosco team is committed towards inclusive and sustainable growth. Under the aegis of Don Bosco Navjeevan Society, we use a holistic model of development and undertake a number of society welfare  activities in larger interest of the community, especially in the area of child health, education, women empowerment and childcare apart from supporting a few other Not for Profit efforts . Don Bosco Navjeevan Society has planned more medical camps in this financial year with the help of government hospitals and other organizations.

Posted by tricitynews online at 05:20 No comments: 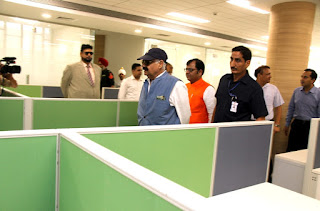 By Tricitynews
Chandigarh 21st July:- The Governor of Punjab and Administrator, UT, Chandigarh V.P. Singh Badnore, today inaugurated the office of Chandigarh Smart City Limited at over bridge Sector 17 Chandigarh in presence of  Davesh Moudgil, Mayor, Arun Kumar Gupta, Home Secretary, UT, Chandigarh,  K.K. Yadav, Commissioner, MCC-cum-CEO, Chandigarh Smart City Ltd, Dr. Saurabh Mishra, Additional Commissioner other senior officers and councilors of MCC.
While addressing the gathering, the Administrator said that the Smart City Mission was announced by the Government of India in June 2015. Chandigarh was selected in fast track round of smart City challenge for the Smart City Mission. He said that under the Smart City Mission project worth 6100 crores have been proposed. Projects to be implemented by SPV are worth Rs. 5700 crores, projects worth 4900 crores are expected to be carried out in PPP model. The Smart city project also involves Projects worth Rs. 400 crores under convergence rest of the projects are to be implemented through.
The Administrator said that the Area Based Development (ABD) proposal aspires to address the key issue that emerged out of citizen engagement and focuses on the theme of “Prevention is better than cure”. The ABD Area of Chandigarh as a model smart area has a huge potential of becoming a model smart area with the various features.
The Administrator asked the officers to start sharing some of projects, which NGOs or corporate houses can do under CSR activities like beautification of sites, maintenance of public utilities etc.
While sharing about the model smart area under ABD proposal, Davesh Moudgil, Mayor of Chandigarh said that there are various features including Model of sustainability and low-carbon mobility with innovation transportation solutions ensuring last-mile connectivity.Model for healthy living with active lifestyle choices; walkable, disable-friendly and well-connected; compact and mixed-use area with investments in green infrastructure, he added.
The Commissioner further said that there is a model of social equity that emphasizes investments and enhancement of public space (public realm, streets, plazs or building etc) catering to the needs and comfort of all irrespective of age, gender or income levels. And also a vibrant regional centre building upon region’s knowledge industry and providing pro-innovation and business infrastructure and environment, the Commissioner added.
Talking about the PAN city proposal, K.K. Yadav, Commissioner MCC said that Pan City Proposal is to improve public life and safety, and livability using Intelligent Multi-modal command & control centre, OFC as backbone of smart city communication, city Surveillance and ATCS for 40 Major Junctions.
He said that the city has also decided to implement some of the proposal of Area Based Development as pan city, which include A part of fund from Smart City Mission would be set apart to leverage loan from AFD for 24x7 water supplying whole city, public bike sharing has been planned to scale it up to city level, all the STPs are Proposed to be upgraded to tertiary level with BoD<5, Instead of Area Based Treatment improvement options pan city works are being undertaken.
The Smart City office constructed as state of art office with modern facilities having provisions of two floors measuring 15310 square feet in total at a total cost of Rs. 6.74 crores. The CEO office, PA to CEO room, Conference room, seven rooms of HODs, server room, 24 work stations, reception area, lift & toilets, circulation area and pantry has been provided in first floor. Similarly, meeting room, two main offices/cabin, six rooms of HODs, 40 work stations, circulation area, lift & toilet and pantry have been provided in the second floor.
Posted by tricitynews online at 05:04 No comments: 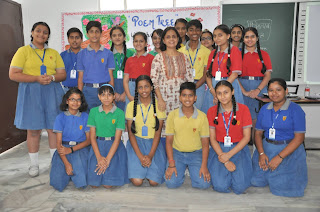 By Tricitynews
Zirakpur 21st July:- Dikshant International School, here invited Loveleen Mishra a renowned Actress, Story Teller & Writer to conduct a workshop about writing poems and stories in Hindi.
It is pertinent to mention here that Loveleen Mishra is an actress & writer, known for her roles more recently in Raees (2017), Amu  and Yuva. However, she is best known for her role as 'Chhutki' in India’s first soap opera “Hum Log”.
She has worked under Stalwarts such as Habib Tanvir, Naseeruddin Shah and Under Directors such as Govind Nihalani, Anurag Kashyap.
The students gained a lot from hearing to this accomplished personality. The workshop in a way tried to revive the culture of the Hindi language and helped the students know in depth about the origin and sentiments that come with the language.
In the workshop, Loveleen helped students learn creative writing and how to write Hindi Poetry. She had an interactive session where the students were engaged in gaming & exercises that will help build the power of Imagination of students. The students' also built small riddles and wrote poetry in Hindi.
Loveleen's liveliness and her sense of humour made the workshop a very interesting session.
Mitul Dikshit, Chairman, Dikshant International School, said that this workshop was a part of ‘Launching Young Writers’ program in which we plan to get the work of students published in the form of a book. We are glad that the best of children’s authors in the country have agreed to mentor our students in this direction. Each student who participates in these workshops is expected to contribute their own writing and illustration, out of which the best of work will get selected for a collaborative book. We are proud that our students are getting ready to experience the excitement of the next stage of their literary journey which is Student Publishing.

Posted by tricitynews online at 04:54 No comments: 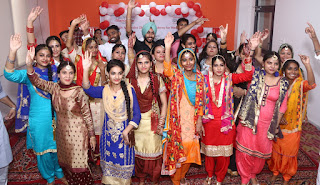 By Tricitynews
Chandigarh 21st July:- Tech Mahindra SMART Academy for Healthcare Mohali, the CSR wing of Tech Mahindra Foundation, celebrated Freshers Day for its newly inducted batches of students at the premises. Near about 160 students of all fresh batches were welcomed by the Academy. The theme of the event was “AAGMAN 2018”, which was unfolded during the celebrations. Sarita Khurana, a renowned celebrity chef was the Chief Guest on the occasion. The title  Mr. Fresher - Yashnoor & Ms Fresher-Napinder Kaur.
On this occasion, a plethora of cultural activities were organized starting by a welcome speech by Ritu Nag, Director, TMSAH, in which she said that it can be a life changing journey for you all and we wish each student to go with an unmatched experience of both life skills and academics. The participants welcomed the freshers with a grand cultural bonanza, which included solo and duet songs, fusion dance performances; stand up comedy performance and many more entertaining acts. The event further entered into a joyous state with the striking Bhangra and Giddha performances followed by a fashion show, in which students mesmerized the audience with their charming ramp walk. Various title prizes for Mr. & Ms. Fresher 2018, most creative student, most disciplined student etc. were awarded to many deserving candidates as an encouragement. The show revealed the tireless efforts of all the students in exhibiting this programme.
The Tech Mahindra SMART Academy for Healthcare in Mohali is a state-of-the-art institute established by Tech Mahindra Foundation that conducts skilling programmes in healthcare. The Academy trains allied healthcare professionals such as operation theatre technicians, dialysis technicians, hospital front office and billing executives, and more.

Posted by tricitynews online at 04:47 No comments: