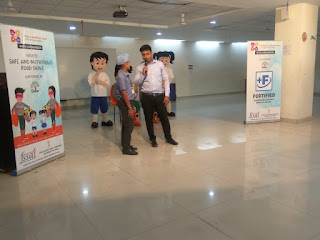 By Tricitynews
Chandigarh 22nd August:- An activity on healthy diet was held at Brilliance World School, Sec 12 here. Students were encouraged to take to healthy food as against junk food.  A short play with comic characters was staged. Most of the lifestyle disorders are somehow or the other connected to our eating habits. Thus to prevent these it is of utmost importance to stick to a healthy diet.
Niranjana Chatterjee, Principal said that it is high time for children to understand the importance of healthy diet and its role in their fitness. The healthy Diet  event tried to achieve this objective in a fun way.

By Tricitynews
Chandigarh 22nd August:- ICICI Lombard, the leading private sector non-life insurance company in India has launched India’s first Artificial intelligence (AI) based technology to facilitate instant health insurance claims approval. As a result, the traditional cashless claim request which takes an average of 60 minutes of processing has been drastically brought down to a minute using AI.
AI has become one of the mega technology trends being leveraged for the broader digitization of society and the economy, thereby impacting services across the board. ICICI Lombard, a pioneer in adopting new technology to ensure customer centricity, has used AI and machine learning to enhance the most critical aspect of insurance–claims settlement. The company has harnessed Algorithms using Cognitive Computing along with Intelligent Character Recognition (ICR) & Optical Character Recognition (OCR) in this tech enabled innovation.
So far, AI has primarily been used in terms of chat bots handling simplistic service requests. Understanding medical diagnosis is a much complex activity for which ICICI Lombard has deployed the AI technology.
ICICI Lombard’s Executive Director Sanjeev Mantri said that the solution is designed keeping in mind medical emergencies. For policy holders, this would mean instant cashless processing of their request; thereby ensuring that they avail immediate treatment that is so important in case of medical exigencies. This solution will make claims processing faster, consistent and convenient for our customers, significantly enhancing their claim experience.
Traditional claims settlement process was a complex and time-consuming task, requiring a lot of technical knowhow and high human dependence. However, the two-step approach under AI, involves automated gathering of data from the claim documents and updating the same in the system. Once the data is uploaded in the system, the AI based technology evaluates the admissibility of the claim. A deep learning module is deployed, which automatically provides the amount to be approved using defined algorithms. The varied medical procedures where AI is being deployed includes Cataract, Maternity, Appendicitis, Hemodialysis and Hysterectomy. The insurer is looking to expand this list over due course of time.
This is not the first time that ICICI Lombard has come up with an innovative solution for its customers. In the past it has introduced several ‘industry first’ solutions such as 'InstaSpect '–India’s first real time claims approval for motor insurance claims using live video inspection and an AI powered interface for customer query management through chat bots (MyRA). 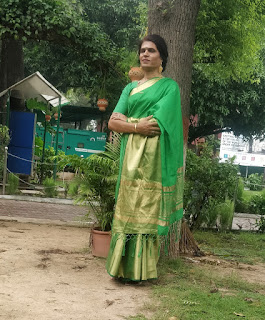 By Tricitynews
Chandigarh 22nd August:- To change mindsets and encourage transgenders to be progressive, Chandigarh's Young Director Ojaswwee Sharma have produced and directed "ADMITTED" a Biographic Documentary of 45-year-old Dhananjay, a social activist who enrolled himself for a master’s degree in human rights and duties at Panjab University last to last session.
Dhananjay is first transgender student at PU since the varsity changed its admission form to admit the ‘third gender’ in 2015. Dhananjay, who already holds a master’s degree in social work, graduated from Government College, Sector 46, in the 1990s under the male category.
Ojaswwee Sharma said that even now most of our citizen and even transgender remain secluded , even common people were not even aware of the term transgender. Transgender's could not walk  out in the open and talk about their identity. He added that education is the best way to change the outlook of the society. While studying human rights, Dhananjay tried to bring awareness about the transgender community and Ojaswwee dittoed in Admitted.
Ojaswwee Sharma commented further that Transgenders should not suffer or feel inferior. Social acceptance is a must to ensure that they are not looked down upon, mocked or judged. Their body and identity does not match but that gives nobody the right to judge them.
He said that at Punjab University even in Class, Dhananjay was not treated differently by any of his classmates. Sharing Dhananjay's story, Ojaswwee says that his parents used to think that he was a shy boy and would happily help his mother in household chores. He added that his parents married him in the hope that it would transform him into a ‘normal’ man. However Dhananjay thinks and behaves otherwise , Dhananjai is  a woman from inside trapped in a wrong body.
Dhananjay is also associated with a community-based organisation Saksham Trust, that has around 3,000 members and works for transgender rights.
He added that he believes transgenders should come forward and get education in colleges and universities like others to progress.
Dhananjay, who was born to a driver,  have two children, son (23) and daughter (20). His kids and wife have supported him throughout and always stand by him.
Meanwhile, Delhi University had also introduced an option of choosing the transgender category in its admission form for post-graduate courses. Bangalore University too, had modified its application form to include the category.
Dhananjay is also represented Chandigarh at the Lesbian, Gay, Bisexual and Transgender (LGBT) parade  in Netherlands in 2016. He has been organising LGBT drive in th koe city for last five  years.
Admitted is a A striking, uplifting journey of five decades to become the first Transgender student of Panjab University.
Admitted is a biographical docudrama on the controversial life of Dhananjay Chauhan - the first transgender student of Panjab University – her life journey with thrust on education along with gender identification, dilemmas and expression in personal life.
Who is in the film?
Based on, and featuring Mx. Dhananjay Chauhan, the docudrama has been directed by Ojaswwee Sharma, and is his major roll-out to film festivals this year.

Posted by tricitynews online at 05:08 No comments:

By Tricitynews
Chandigarh 22nd August:- Are you focussed at achieving the best output for your educational institute’s brand building? The trends today show that a website opens many great possibilities for educational institutes. The need for a reliable, attractive and effective web existence is increasing as internet and technology have become a vital part of the education process. Also, most people use internet to research about any institute.So, having a website makes strong impact on the image of your institute by increasing its visibility. It also helps togain instant digital identity and global presence.
CEO of Career Lift Ed-Tech, Nitil Gupta said that educational institutes have a lot to offer when it comes to serving the society. They strive to provide the appropriate education to their students. But most of their efforts go unnoticed because of not being present online. The same can be achieved through a professional web presence. To meet this need we made Edu-CMS, a website specially designed for Educational Institutes, be it coaching institutes, schools, colleges or universities.
He shared further that those days are gone, where the markets were a tale of barter, today the digital growth has expanded the market exponentially and websites are now focussed on not only achieving the optimum lead generation but also on brand building. The shift in focus is not just on overall appeal, but is a combination of expert content, valuable design and quality conversions. These are to be crafted intelligently so that your brand can reach desired business results and help you enlarge and multiply your market brand presence.
There is a need for continuous information sharing for an educational institute –among students, their parents, alumni and all other faculty and professional members. A website lets you communicate effectively. Information can be presented in a way that is highly accessible and easy to use.
A website is an efficient marketing platform that speaks and sets you apart from your competitors. It not only compensates for the optimum conversion of your leads to sales, but also does that in a shorter span of time. Gone are the days when customers need to be given all the information over the phone or through time consuming outdated marketing techniques; with a website you could save resources resulting in the most optimal output!
A website that is unattractive poses many risks. A broken link or outdated and shabby content may affect the overall brand image of the educational institution. All this can be taken care of through a website with content that is error free and provides incredible experience. Career Lift Edu-CMS is one such website which has no frills and is content ready. It is designed keeping in mind the needs of education industry to help institutes stay ahead of changing trends.

Posted by tricitynews online at 04:49 No comments: