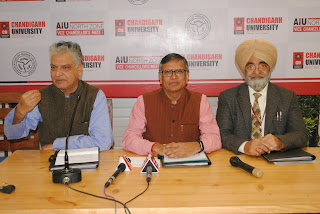 By Tricitynews
Chandigarh 06th December:- Prof Sandeep Sancheti, President, Association of Indian Universities (AIU), said that with changing times and advancements in technology the academic model being adopted by universities across India needs to be revamped accordingly. He was speaking during the press conference at Chandigarh to brief the media persons about the upcoming annual AIU North Zone Vice chancellor’s meet-2018.
Professor Sandeep Sancheti said that the annual meeting of the vice chancellors would be held at Chandigarh University, Gharuan on 7th and 8th December in which Vice Chancellors of more than 100 states, central, deemed and private Universities would be taking part. The theme of the annual vice chancellors meet is ‘Higher education in India: Opportunities and Challenges”. Prof. Furqan Qamar, Secretary General, AIU and Dr. R.S Bawa, Vice Chancellors, Chandigarh University was also present during the Press conference.
While giving details Prof Sandeep Sancheti said that the aspirations of today’s Youth and Industry have changed significantly which has resulted in bringing the academic institutions and universities together on one platform so that a decision can be made to bring reforms in the current education system especially in higher education. He further added that universities are no longer considered to be just a degree imparting institutions but they should be recognized as centre of skill development where employability, inter-personal or entrepreneurial skills can be incubated amongst the youth so that they can match up to the expectations of today’s changing global scenario.
Prof. Furqan Qamar said that the funding from Indian Government for supporting Higher Education is continuously on a decline, the challenges before Universities towards realizing Research Dimension of Universities is immense. Similarly attracting International students is an inevitable need for better global positioning of Indian Universities. He further added that this meet aims to deliberate on a plethora of issues concerning the ‘Higher Education in India: Opportunities and Challenges’ with specific reference to global trends, national preparedness and regional requirements in Higher Education. The meet has stupendous significance as a large number of Vice Chancellors from various Universities in North Zone are expected to participate in the deliberations.
While interacting with the media persons Dr. R.S Bawa said that the significance of AIU in today’s’ scenario is extremely important as it is one of the premier representative body of Indian Universities where we can discuss the important issues that are concerning higher education. It is important and significant to bring reforms in higher education with changing times so that universities in India are globally competent and hence attractive for students all over the world.
Posted by tricitynews online at 03:33 No comments:

By Tricitynews
Chandigarh 06th December:- Royal Fables, a heritage platform that promotes regal, royal India in all its glory, is all set to unveil its first exposition in Chandigarh in association with Kanjimull & Sons by Gaurav Khanna at Taj Chandigarh, on 8th December 2018.
The exposition will present art, fashion, textiles and art objects made in leading palace studios across the nation. Besides hand picked collections by leading designers and labels that keep the rich Indian hand made tradition alive.
Anshu Khanna, Founder, Royal Fables said that this is our milestone year and we are trying to take the regal legacy to smaller cities and towns which are inhabited by luxury seekers and heritage lovers.  Royal Fables is envisaged as that one platform where we showcase the aura of Princely India as recreated by young scions of royal families. 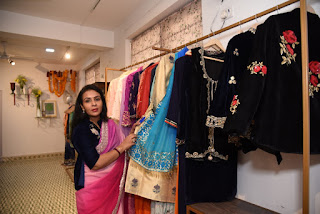 Royal Fables has tied up with Plumtin, a couture label based out of Chandigarh to host the preview on 7th December 2018 at their store. On the occasion will be presented Royal Collections by the blue-blooded scions of Princely India along with heritage jewelry by Kanjimull & Sons by Gaurav Khanna and handcrafted ensemble by Samarjit Gurm, Plumtin. H.H. Maharani Radhika Raje Gaekwad of Baroda will grace the preview.
The bond between Kanjimull and Princely India dates back to 1870 when my great grandfather Kanjimull Khanna, started designing personal jewelry for the Royal family of Patiala. Other states of Punjab followed. Slowly our name spread right up to Great Britain and we were designing for the nobles of Britain.
That set the tone for what is now Kanjimull and sons - a name synonymous with fine jewelry. Gaurav Khanna, said that we at Kanjimull and Sons use the finest quality of gemstones and Diamonds and dare to experiment with rare color combinations to create fine jewels with interesting designs. He is excited to present our collection at the upcoming Royal Fables at the Taj Chandigarh.
On 8th the exposition opens with a formal launch by Vijayender Pal Singh Badnore, Punjab Governor. The exposition closes with a talk on the handcraft legacy of Princely India, chaired by Rani Vinita Singh Patiala and moderated by Anshu Khanna. The evening ends to the sounds of live music by Prabhjot Singh and a regal fashion walk featuring the visiting royal dignitaries who will dress up in their own creations. Many posing as a muse to other royal designers. There will also be a culinary showcase of royal cuisine led by two siblings Thakur Shivraj Singh of Limdi and Kanwarani Vijaya Singh Nahan who are both chefs at heart and blue blooded by birth.
The list of participants is prolific and includes royal families from across the nation including:  HH Maharani Radhika Raje Gaekwad of Baroda, Rani Vinita Singh Patiala, Rani Kavita Kumari Sahiba Jodhpur, Rani Uttara Singh of Jodhpur, Princess Nandini Singh of Jhabua, Rajkumari Alkarani Singh Pratapgarh Rajkumari Richa Rajya Laxmi Danta, Kanwarani Kamini Singh Seohara, R.K. Chandni Singh Seohara, Baisa Pushpita Singh Kharwa, Rani Jaykirti Singh & Narata Singh, Baria,  Thakurani Darshana Kumari of Mandawa, ,  Yaduveer Singh Bera. Rani Madhavi Mandloi Zamindar, Bada Rawala,Indore, Thakurani Madhulika Hada of Koela, Sonal Dayal Sarjolta, BBG Royals and Shivani Singh.

Posted by tricitynews online at 03:24 No comments:

By Tricitynews
Chandigarh 06th December:- Vivo, the global innovative smartphone brand, today launched the Y95 in Punjab as part of its growth strategy in the region.With a strong focus towards the Y series, Vivo plans to address the consumers’ needs and preferences in the sub-20K category with a suite of quality products that are a perfect blend of performance and design at an aggressive price.
Priced at INR 16,990, the Y95 will be available in Starry Black and Nebula Purple starting today at all offline channels in Punjab and also on leading online platforms such as Flipkart, Amazon, PayTM and Vivo IndiaE-store, to ensure availability across the country. Like all Vivo devices, the Y95 will be manufactured at Vivo’s Greater Noida facility. Consumers will also get an array of attractive offers* on the purchase of the Vivo Y95 on offline and online channels, such as no Cost EMI (Upto 15 Months on Credit Cards, Debit Cards and Bajaj Finance EMI cards), Lowest EMI starts with INR 1133, Paytm INR 1500 cash back coupon and benefits worth INR 4,000 along with 3 TB Data from Reliance Jio. 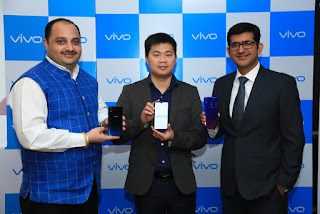 With the launch of the Y95, Vivo aims to further expand its market presence in the state of Punjab. With a presence across 3100+ retail and 25+ service centers, the Punjab market contributes almost 4% to Vivo India. Successor of the very popular Y83 Pro, the Vivo Y95 is the latest addition to the Y series of smartphones that aims to further strengthen its product portfolio in the region.
Commenting on the launch, Nipun Marya, Director-Brand Strategy, Vivo India said that india is a key market for Vivo, and we’ve seen positive consumer response coming from Punjab.We continue to be committed to bring the latest in product innovation and new-age technology through our smartphones to bring an enhanced smartphone experience for our consumers. He added further that we are sure that the people of Punjab will certainly give a positive response to the Y95.The Y95 features a 20 MP Front AI camera for exceptional photos and a 4030mAh battery to ensure an immersive experience. With Y95, Vivo becomes the first smartphone manufacturer in India to feature the all-new Qualcomm Snapdragon 439 octa-core processor which offers a powerful yet efficient performance.
Vivo has always focused on putting the consumer first and ensuring consumer satisfaction is of utmost importance. Towards this, Vivo has strengthened its retailer and after-sales network over time in the region. Vivo has a robust after-sales service network across Punjab and is placed strongly to address consumers’ products queries in a better and efficient manner. The unique thing about Vivo’s service centres is that these are ‘Company owned and company operated’ which translates into better quality service and faster turnaround time for smartphones related issues. Vivo will continue to expand its service network footprint across the country to ensure consumers get world class after sales service.

Posted by tricitynews online at 03:17 No comments: