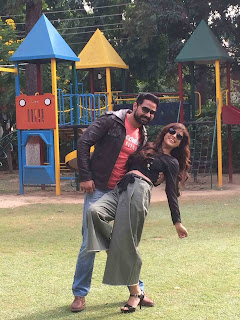 By Tricitynews
Chandigarh 27th November:- Punjabi film Din Dehardey (DDLJ) all set for its screening on November 29. Star cast of DDLJ today interacted with media at Chandigarh Press Club. Its star cast includes Kartar Cheema,  Sapna Thakur, Ranjit, Rose, Nirmal Rashi, Satwinder Kaur, Kake Shah, Bhuto Shah, Sardar Sohi, Sanjeev Atgiri, Nirmal Rishi and Jatinder Suri while Guneet and Vaneet are acting in child role.
While addressing the media Honey-Romey said  that DDLJ as the name suggests is about is a potboiler, with the backdrop of two people coming together, and the challenges they face in doing so.  Raj is on the run, fed-up off his parents trying to hook him up with a suitable match, Simran. Simran also runs away and that causes a rift between the families. As Simran and Raj end up together on the run, not knowing each-other. Initially, their interaction becomes an altercation, which later ends up into love.
As they come back to their families, they come to find out that the rift between the families has become feudal, and  there is no way the families would end up agreeing to their match. Simran’s family finds another match for Simran, an NRI named Sam, who is an old friend of Simran’s, as well. Sam comes to know of Simran’s dilemma and vows to help her and Raj.
The film is being produced by Krishan Garg, Sukhpal Singh Bhati, Asha Thakur and Honey Singh while Udit Oberoi, Subhash Nagar and Rohit Bhandari are Co-Producers. Story, Screenplay and Dialogues are done by Honey Singh, Jimmy and Manoj Sabharwal. Tarun Rishi composed the music while Kulwant Gararia, Nimma Loharka and Tarun Risi are lyrists. Kamal Khan, Shehnaz Akhtar, Mohammad Irfan, Amit Mishra and Rini Chandra lend their melodious voice to film’s songs. 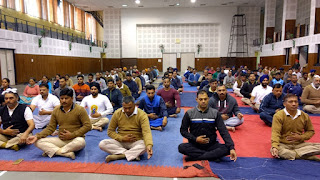 By Tricitynews
Chandigarh 27th November:- Around 350 policemen from Chandigarh underwent multiple sessions on Integrated Meditation Technique (IAM Technique)delivered by instructors from Amrita VishwaVidyapeetham, the top-ranked private university run by the Mata Amritanandamayi Math of Kerala, to achieve inner peace and heighten their mental faculties.
The trainers, in association with the youth wing of the Math called AYUDH, also held IAM Technique and motivational sessionsin different schools and colleges in the city.A special session was held for around 100 NCC cadets in DAV College, Sector 10.The workshop on IAM was led by a team of certified IAM instructors from Amrita. In a matter of 7 days, they managed to touch the lives of more than 400 people across Chandigarh.
The simple yet effective meditation style, called Integrated Meditation Technique (IAM Technique), was created by theworld-renowned spiritual leader and humanitarian Sri Mata Amritanandamayi Devi (affectionately called “Amma”).
IAM Technique instructor Narinder Singh that IAM is a combination of relaxing yoga stretches, breathing and concentration exercises and takes only 20 minutes a day. It is a powerful practice that helps people find fulfilment in life. Its goal is the integration of body, breath, and mind. It is a suitable practice for people of all faiths; it is not bound to any religious or spiritual-belief system. According to Indian tradition, spiritual knowledge is given free of charge. This is also the case with the IAMTechnique courses.
The participants were delighted to learn the powerful IAM Technique for mental peace and wellbeing. Chiranji Lal, Inspector (In-charge VIP protection), Punjab Police, Chandigarh, said that our entire team is thankful to the team members from Amrita VishwaVidyapeetham who conducted such an effective meditation program. We all want more camps to be organised as our jobs our full of stress. IAM meditation helps us de-stress, gives us peace of mind, heals the body and strengthens our faith in God.
IAM Technique instructor Shweta from Amrita VishwaVidyapeetham, said that meditation is not a new thing at all. For thousands of years, meditation in various forms has been taught in India. However, sages always create new forms to fit the times and in keeping with the culture, capabilities and needs of the current times. On the same lines, IAM Technique is Amma’s gift to humanity. It is easy to practice and is just 20-minutes long, yet it incorporates the best elements of all types of meditation known to the world including physical relaxation exercises, visualizations, breathing practices and stimulation of self-awareness.

Employees Will Get Pay Scales Equal to Punjab When Congress Comes in to Power: Tanwar 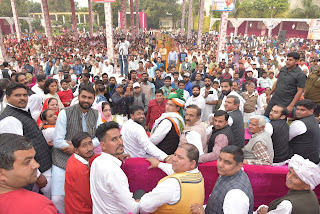 By Tricitynews
Chandigarh 27th November:- Dr. Ashok Tanwar, former M.P., President, Haryana Pradesh Congress Committee has appealed to the people that they should vote for the Congress candidates in the coming elections to 5 Municipal Corporations and 2 Municipal Councils.
This call was given by him in Karnal today during the ‘Jan Sampark Abhiyan’. Before starting this programme, Dr. Tanwar paid obeisance at the Gurudwara and prayed for the welfare of the people of Haryana. During the abhiyan, Dr. Tanwar addressed 25 meetings at different places in Karnal.
Speaking during this programme, Dr. Tanwar lashed out at the inefficiency of the Khattar Government and said that the Chief Minister and his Ministers have not been able to take care of their own constituencies and to expect welfare of Haryana from them is out of question.  He said that the employees in the State are on the roads to get their just demands, the farmers are compelled to sell their produce at low rates, the females are not feeling themselves secure and the common-man is worried about his own security.  He said that the BJP had made a large number of promises with the people but it has miserably failed to fulfill these promises. He said that under the patronage of the Chief Minister and the Ministers, the sand mafia is acting freely and the unsocial elements have no fear of law. The police administration in the State has not been able to control the incidents of rape, murder and other crimes. He said that the Home Department being with the Chief Minister himself, Mr. Khattar his directly responsible for this failure. Dr. Tanwar said that the BJP is a sinking ship and a number of M.Ps. of this party has refused to contest the coming elections.
The Haryana PCC Chief appealed to the people to elect the Congress candidates with thumping majority in five Municipal Corporations namely Karnal, Panipat,Ymunanagar,  Rohtak and Hisar and 2 Municipal Councils of Jakhal Mandi (Fatehabad) & Pundri (Kaithal), so that the BJP and his B team INLD is taught a lesson.
Dr. Tanwar assured the people that when the Congress Party comes into power under the leadership of Rahul Gandhi, the farmers will get assured reasonable price for their produce, old age pension will be increased and the demands of the agitating employees will be settled and deteriorating law and situation will be set right.  He also assured that after the Congress Party comes in to power in Haryana, the employees will be given pay scales equal to Punajb.
On this occasion, Bhag Singh, who contested last Vidhan Sabha election as Independent candidate expressed his full faith in the Congress Party and joined the Party.
In the Jan Sampark Abhiyan today, those who participated included Tarun Bhandari, Hoshiyari Lal Sharma, Pankaj Punia, Krishan Bastara, Mehar Singh Gharaunda, Munish Kamra,Gian Sahota, Shrawan Kumar, Khazan Singh, Santosah Kariliya, Sarita Saroha, Usha Tuli, Ex-M.C., Sagar and hundreds of Party workers.

Posted by tricitynews online at 05:13 No comments: