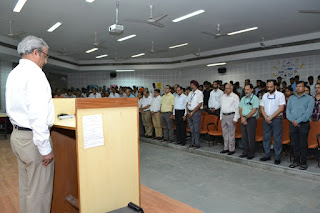 By Tricitynews
Chandigarh 17th August:- As a mark of respect, two minute silence was observed to mourn the sad demise of India's former Prime Minister Atal Bihari Vajpayee at NIPER, S.A.S. Nagar. NIPER Director, Prof. Raghuram Rao expressed the grief on the loss of a great son of the India. All students and staff members of the NIPER assembled to pray for the peace of departed soul.
Posted by tricitynews online at 05:59 No comments:

By Tricitynews
Chandigarh 17th August:- With the divine blessings of Satguru Mata Sudiksha Ji Maharaj, Mukti Parv Samagam was successfully organised at the Sant Nirankari Satsang Bhawan, Chandigarh, Niranjan Singh (I.A.S Retd.). addressing on the significance of this occasion, Niranjan Singh Ji stated that Nirankaris celebrate Mukti Parv on this day to commemorate and pay tribute to the saints who devotedly surrendered their lives in spreading and promoting truth.
While Mukti Parv was celebrated through all the branches in India and abroad, the main congregation was held in the benign presence of Satguru Mata Ji at Delhi. Nirankari Satguru Mata Sudiksha Ji, while addressing a huge gathering at the Mukti Parv Samagam, stated that to surrender selflessly and giving up one’s ego is the most important quality of a devotee. This helps him rise in the eyes of the True Master and earn praise from one and all. Thousands of devotees came from Delhi, Greater Delhi and several other parts of the country.Several saints from abroad were also present. 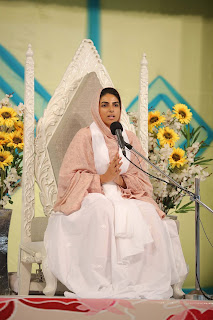 Satguru Mata Sudiksha Ji said that during Mukti Parv, the Mission remembers and takes inspiration from Shahenshah Baba Avtar Singh Ji and a host of devotees who followed him and took this Mission forward. Their most important quality was self-surrender at the holy feet of the True Master and the spirit of giving priority and more importance to others. There were no ‘Ifs’ and ‘Buts’ in their conduct.

Her Holiness reminded that Baba Hardev Singh Ji and Mata Savinder Hardev Ji also wanted to bring back the Mission of the times of ShahenshahJi. And this can happen only if we also develop the quality of egoless surrender and giving preference to others like the devotees of those times.
Mata SudikshaJi said that while sailing a boat we cannot control the strong winds but we can always adjust our sails. Hence, we can also take inspiration from ShahenshahJi and the advantage of those principles with the spirit of total surrender.
Mata Ji recalled that initially the day was known as Jagat mata Budhwanti Ji and Shahenshah Diwas. But when the first President of the Sant Nirankari Mission Pradhan Labh Singh Ji breathed his last on this day in 1979, Baba Gurbachan Singh Ji named it as Mukti Parv Samagam. He did not mind that hitherto to the day was dedicated to his holy Mother and Father, but included all the devotees who also served the Mission with full sense of surrender to take this Mission forward.

During the Samagam, Rev C.L. GulatiJi, Secretary Sant Nirankari Mandal along with Rev Gobind Singh Ji, President Sant Nirankari Mandal, Rev K.R. Chadha Ji, Chairman, Central Planning and Advisory Board and Holy Sister Bindiya Chhabra Ji, Executive President of theSantNirankari Charitable Foundation presented the ‘Supreme Spiritual Icon of the Year-2018’ Award to Satguru Mata SudikshaJi. The award, given to Satguru Mata Savinder Hardev Ji Maharaj by the U.S. based International Organization ‘We Care for Humanity’ was received by Rev C.L. GulatiJi on her behalf at a special function held in Kolkata on July 28-29, 2018.
The award also carried a Certificate of Appreciation,a Stole and a Medalion. This award for the year–2017 was given by the organization to Baba Hardev Singh Ji.
According to the Founder President of the organization and Chairperson of its Global Order of Dignitaries and Philanthropists(G.O.D.) Awards Committee,Her Excellency Princess Maria Torres, they had honoured Mata SavinderHardevJi for the exemplary socio-spiritual and charitable activities she made globally.
The Samagam was also marked by the release of ‘Sampuran Hardev Bani’ translated from its original Hindi into Kannada language. The book was presented to Her Holiness Mata Sudiksha Ji Maharaj by Rev D.R. Bajaj Ji, Vice-President of Sant Nirankari Mandal, Rev C.L. Gulati Ji, Member Incharge Production and Distribution of Publications and Magazines and Rev Kirpa Sagar Ji, Member Incharge Publications.

Posted by tricitynews online at 05:47 No comments: 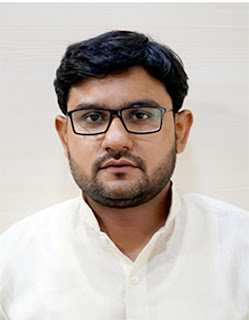 By Tricitynews
Chandigarh 17th August:- A local entrepreneur and social worker, Amit Dewan was felicitated by the Municipal Corporation Chandigarh (MCC) on the occasion of the 72nd Independence Day programme.
Amit was honoured by the MCC Commissioner K K Yadav  and City Mayor Davesh Moudgil at a special function held during the unfurling of the national flag at the MCC premises for his selfless services rendered to the society.
Amit owns Digital World, a technology firm based at Sector 22B, Chandigarh, which deals in the video editing machines and Photoshop software among other equipment and technical solutions.
Amit Dewan is known for providing technical support to the Chandigarh Police in solving various cases, besides devoting his free time in helping and guiding the needy patients at the PGI Chandigarh on regular basis. He has received various appreciation letters from the government authorities from time to time.

Posted by tricitynews online at 05:38 No comments: 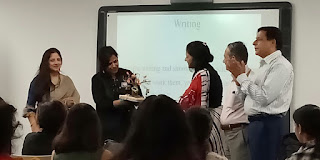 By Tricitynews
Chandigarh 17th August:- Creative writing is a way of life and not an exclusive prerogative of the writers, said Suditi Jindal, founder of Philyra Training and Consultancy promoting creative writing in the city.
Suditi Jindal who is an author of two novels and feature editor of Asian Lite magazine published from UK and Dubai, conducted the Master-Class in Creative Writing at the British Council Library here today.
Renowned journalist and internationally best selling writer Kota Neelima from New Delhi, shared the experiences of her creative journey with the enthusiastic audience.
Nearly (50) aspiring writers attended the workshop which provided the participants hands-on experience in creative writing, informed Suditi Jindal who is also the Features Editor of Asian Lite published from the UK and Dubai.
Suditi, who has two novels to her credit, Grow Up Moon (2012), and The Adulteress (2016), recently completed her Masters in Creative Writing from the University of Durham, in the UK.
Anyone can develop the writing skills which require extensive reading of other writers’ work, and becoming an expert in “showing” and not “telling” in one’s writings, she advised.
As an acclaimed author of several fiction and non-fiction works, Kota Neelima, advised the participants on how ideas evolve into a book.  She shared  background of her latest work in "Widows of Vidarbha: Making of Shadows" published by Oxford University Press, India.
The aspirant authors also got insight into the creative motivation of famous authors and how they continue to write successfully.
Posted by tricitynews online at 05:13 No comments: