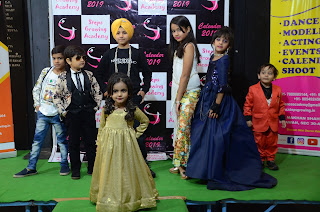 By Tricitynews
Chandigarh 10th Jan,2019:- The Calendar of Baby and Junior Super Kid Model-2015 was released today by Steps Growing Academy Chandigarh. The calendar was released by the six-month-old baby model Dhwani Mahajan. In the Baby Calendar the children of 00 to 04 age group have been included and in the Junior Super Kids Model, children in the age group of 05 to 12 has been included. On the occasion of unveiling the calendar, 11 Babies and 12 Kids models drew attention of everyone by walking on a ramp.
Director of Steps Growing Academy, Shivi Mahajan and Managing Director, Gaurav Mahajan, said that this the first time academy is launching calender for children of  00 to 04 age group and it’s fourth time in a row that the calender for the children from 05 to 12 years of age are being presented. They said that the specialty of these calendars is that they are designed in conceptual form. In both calendars 2-2 photos of models are included.
According to Gaurav Mahajan, photos for the calenders have been shot in villages, parks, buildings and markets for the outdoor session. At the same Indoor Photo shoot was done at the Academy. He said that models in the calendar for the age group of  00 to 04 age are Aarav Ranaut, Aarvpreet Singh, Rivaan Verma,  Vedansh Grover, Vedanshi Verma, Nitya Grover, Dhawni Mahajan, Kritisha Kashani, Shanaya Mahajan, Siddhid Manchanda and Vihan Choudhary and in the age group of 05 to 12 Manmudit Mehra, Bhakti Goyal, Charvi Arora, Kanishka Bhagat, Dhruv Bamotra, Abhay Bhagat, Adwiti Singh, Yuvraj Singh, Manvi Sharma, Yashraj Pal, Riddhima Manchanda and Daksh Bamotra are the models.
Shivi Mahajan said that Adwiti Singh, Manvi Sharma, Charvi Arora, Kanishka Bhagat and Manmudit  Mehra have been associated with their academy for the past 04 years. Almost all of these children are spreading their skills in Punjabi films and in different relity shows on National Channels .
Shivi said that the main aim of the academy is to provide a platform to the children, where they can present their skills . According to Shivi, her aim is to highlight the achievements of the 12 super models of the previous year's calendar and to encourage these children.

Posted by tricitynews online at 04:42 No comments: