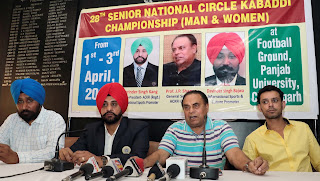 Founder General Secretary of the Amateur Circle Kabaddi Federation of India, Prof JP Sharma and Narinder Singh Kang, Senior Vice President of ACKFI said that Minister for Agriculture, Government of Haryana, OP Dhankar will inaugurate the championship on April 1st.  Ram Bilas Sharma, Minister for Education & Tourism, Government of Haryana is the President of ACKFI.
ACKFI is affiliated to World Circle Kabaddi Federation & Asian Cicle Kabaddi Fedration. Formed in the year 1978 at Jind, Haryana, the federation is registered body for men & women kabbadi games. This Kabbadi body has organized 27 Senior National Circle Kabaddi Championships for men & women uptill now. Besides, the ACKFI has held four Federation Cup tournaments and four North Zone Circle Kabaddi championships.
The federation has participated in International Circle Kabaddi tournaments in Lahore (Pakistan) in 1983, 1985, 1988, 1989, 1997, 1998, 1999 and 2004. It also part in the World Circle Kabaaddi Championshiops in Canada & USA in 1995 and 1998. In 2008 ACKFI took part in the World Kabaddi Championship at Melbourne (Australia).
Prof JP Sharma has been felicitated at various national and international platforms for his contribution towards promoting Kabaddi. He said that even as cricket remains the most watched sport, Kabbadi is fast catching up in India and around the world. It has successfully established itself in terms of revenue and fandom within the Indian sporting firmament.  We have a large army of strong kabaddi players and it as important to promote them as is being done for the cricketers. We need to create more international opportunities for them.

Posted by tricitynews online at 04:23