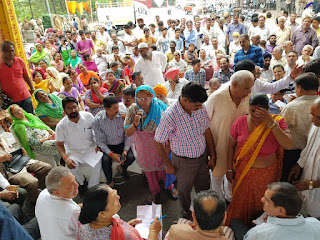 By Tricitynews Reporter
Chandigarh 05th August:- Chandigarh Mayor Asha Jaswal is all set to help people in villages and colonies to get rid of their problems as soon as possible. She has decided to listen to the problems of the common man through conducting Chaupal (meeting with local people) near their doorstep.
By conducting such Chaupal in Shivalik Garden, Manimajra, she becomes the first Mayor to tackle the grievances of the people via these meetings with full technical support by the officers of Administration and Municipal Corporation, Chandigarh. Near about 300 local residents of Ward No. 25 & 26 including Indira Colony, Old Ropar Road, Mari wala Town and other areas of Manimajra were present during the Chaupal.
During the first Chaupal held in Manimajra, she was accompanied by both the area councilors of Ward No. 25 & 26 i.e. Sh. Vinod Aggarwal and Sh. Jagtar Singh Jagga with technical team from MC and Administration comprising N.P. Sharma, Chief Engineer, Sanjay Arora, Superintending Engineer, Dr. P.S. Bhatti, Medical Officer of Health, MC and officials from Maleria Department, UT, Chandigarh. Sanjay Tandon, president, BJP, Chandigarh and other local leaders also joined her during the Chaupal.
She listened to the grievances of local people and asked the concerned officers for early resolutions of the problems. People generally reported problems like sewerage blockages and pothole in internal streets etc. The Mayor asked to concerned officials to prepare estimates for the works required to be carried out there and get them resolved as early as possible.
She further said that these types of Chaupals will be conducted in all the villages and colonies of the city to resolve the grievances of local residents, which she has committed during the MC election. She added that review meetings of these Chaupals will also be held to get the results faster.

Posted by tricitynews online at 05:38