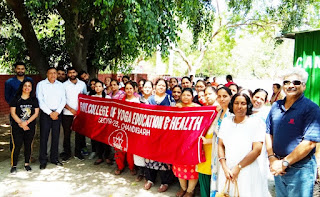 By Tricitynews
Chandigarh 27th April:- A six day programme on the ‘Role of Yoga in Different Aspects’ concluded in Govt. College of Yoga Education and Health, Sector 23, Chandigarh. The programme consisted of Workshops, Seminar, Rallies and Camps.
The first day of the programme started with a workshop on mantra and Nad yoga.  On the second day of the programme the participants were made aware of the Internal and External cleanliness with shatkriya practices which is a part of internal cleansing followed by Rally on Swacchta and Cleanliness drive for the environmental cleanliness.
On the third day the knowledge about yogic mudras (psychic gestures) and acupressure  was given in the workshop to the participants.  A workshop on pranayama and meditation was conducted on the fourth day.  A lecture on ‘Importance of vote and yoga’ was conducted on fifth day followed by a rally on the same topic.
The programme on the sixth day concluded with a ‘Power Yoga Session’ and a seminar on ‘Role of diet for maintaining Good Health’. The various sessions were conducted by the college under the guidance of Ms. Meetu, Dr. Gunanidhi, Ms. Anupma, Ms. Sheeraj, Sumant, Dr. Mohinder Kumar, Kulwant Singh. Around 115 people participated in the programme.
Posted by tricitynews online at 05:53