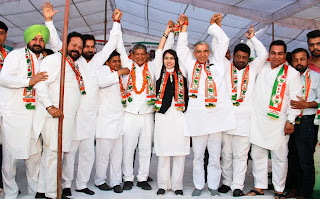 By Tricitynews
Chandigarh 22nd April, 2019:- Congress star campaigner Harish Rawat on Sunday predicted a massive victory for party Lok Sabha candidate from Chandigarh Pawan Kumar Bansal. Saying he had brought blessings of Kedarnath, Badrinath and Hemkunt Sahib for the four-time MP, he said as Union Water Resources Minister Bansal had done a good turn for Uttarakhand by sanctioning three major multipurpose hydel projects for Uttarakhand at major cost to the central government.
Addressing a massive gathering, organised by Uttarakhand Cell of Chandigarh Congress at Ramleela grounds in Sector 43, the AICC General  Secretary incharge of two North-Eastern states and former Uttarakhand Chief Minister appealed to the people to send Bansal to the Parliament again with a big margin and bring Congress back to power at the Centre to finish five-years of BJP misrule.
Taking a dig at the BJP and Prime Minister Narendra Modi for testing the people with their own “mann ki baat”, he said that the Congress on the other hand was interested more in listening to the common man’s “mann ki baat”.
Dwelling on the Congress manifesto released by party President Rahul Gandhi, he said that the revolutionary NYAY scheme will prove to be a game-changer in uplifting the fortunes of 5 crore families and 25 crore people by ensuring a minimum monthly income of Rs 12,000. He said the Congress will come good on its promise of reserving 33% seats for women in the vidhan sabhas and the Lok Sabha and write off farm loans within 30 days of coming to power.
Lashing out at the spiralling prices of petrol, diesel and other essential commodities, Rawat said the BJP had added to the woes of all sections of the people while helping a handful of influential families to proper beyond proportions. Instead of fulfilling its promise of providing two crore jobs a year, the government during its five years had in fact added another eight crore people to the BPL list.
In his speech, Pawan Bansal, while reeling out a long list of failures of the BJP both at the Centre and in Chandigarh, said that while Chandigarh was always smarter than the smart cities, it had plummeted in Swachh Bharat and Smart cities rankings, because of the complete neglect and mismanagement during the last five-years.
On an appeal from State Congress President Pardeep Chhabra the crowds raised their hands in acknowledgement that they will not only convince people in their areas of influence within the city but also in adjoining areas to vote for the party.
Among other local party leaders present were Subhash Chawla, Harmohinder Singh Lucky, Gurpreet Singh Gabi, Devinder Babla, Bhupinder Singh Badheri, Gurbax Rawat and Barinder Singh Rawat.

Posted by tricitynews online at 05:00